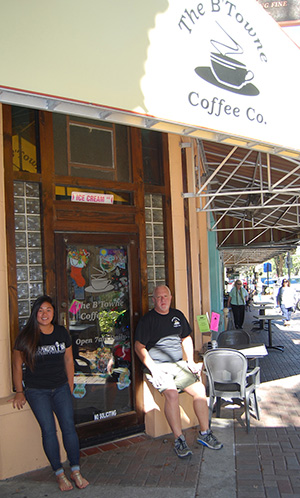 If you want to see a lighted ball drop with a partying throng of revelers on New Year’s Eve but cannot get to Times Square in New York City there is a local solution — Old Main Street in Bradenton.

The Old Main Street Merchants Association has been sponsoring a New Year’s Eve party on the two blocks north of Manatee Avenue West in downtown Bradenton for more than 13 years.

“The New Year’s Eve is typically one of the biggest events of the year in downtown Bradenton,” said Mike Gold, treasurer of the business group and owner of the B’Towne Coffee Company. “It’s two blocks packed elbow to elbow like Times Square.

“People really get into the party and want to celebrate,” Gold said. “There’s live music, vendors, and we do a ball drop, and all the bars do a champagne toast at midnight.”

The fun starts at 6 p.m. with the band The Beat Downs playing for about two hours, said Morgan Bettes, owner of Independent Jones, an event planning and promotional company.

Then, Have Gun, Will Travel, a local band that has become nationally recognized, will take the stage around 9 p.m. and play until the crowd rings in the New Year.

The street will be closed to vehicle traffic at 2:30 p.m. and will reopen sometime after midnight when the Bradenton Police Department deems it is safe for traffic, according to a press release from Tim McCann, public information officer for the city.

Bettes said this will be a family-oriented event with plenty of activities for children, such as caricature artists and face painting.

There also will be vendors and food trucks serving tacos, crepes, soft pretzels, pizza, shaved-ice cones, and other delicious fare, she said.

But it will be the bands that keep the partygoers in the celebratory mood, Bettes said.

“Everybody loves music and appreciates how it can bring people together,” she said. “It has a unifying aspect to it.”

The Sarasota-based rock and roll band, The Beat Down, will open for a nationally known band with Bradenton roots, Have Gun, Will Travel.

This alternative folk-rock band started in 2006 and makes reference to Bradenton in several songs, including “Salad Days” from the album “Postcards from the Friendly City,” according to promotional information on the band’s website. 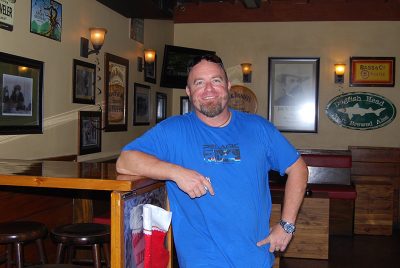 CARL MARIO NUDI PHOTO
Paul Kotlarczyk, owner of The Loaded Barrel Tavern, 405 Old Main St., said the New Year’s Eve party on Old Main Street is a good event to experience for people who have never been to downtown Bradenton.

This is the second year Bettes has organized the New Year’s Eve event for the business owners’ group. She also puts together the monthly Main Street Live events for them.

Gold said when the merchants’ association began holding the New Year’s Eve event about 14 years ago, they had an events manager, but she moved away and the association picked up operating it themselves.

“It’s like a fulltime job,” Gold said. “We knew we had to get someone to run it.”

Bettes had worked as an executive associate for Realize Bradenton, a non-profit organization working with the City of Bradenton and the Downtown Development Authority to promote redevelopment and economic growth downtown, before she branched out to start her own business.

“We knew Morgan from Realize Bradenton,” Gold said. “Morgan and Independent Jones worked out to be a good fit with us.”

Bettes, 28, moved to Bradenton from Oshkosh, Wis., about seven years ago.

She has a degree in business marketing and graphic design from University of Wisconsin, Oshkosh, and started her firm, Independent Jones, with a partner, Wade Hamilton, about three years ago.

“We realized we both have a love for music and can make it work,” Bettes said. “We connect fans, bands and businesses.”

Bettes said they started the company after speaking with a lot of young Manatee County residents referred to as millennials.

“They wanted more nightlife, more things to do, more live music,” she said. “Downtown has lot of great bars and restaurants, but there’s not much outside of downtown.

“So, we try to provide something different,” Bettes said.

“Old Main Street Merchants Association is a good group to work with,” she said. “They want to get people to enjoy downtown.”

Gold said the merchants group was started about 13 years ago after he opened his downtown business, B’Towne Coffee Company, 440 Old Main St., Bradenton.

Another downtown group was doing promotions, but had disbanded, he said.

“The purpose was to keep downtown events going so the interest in downtown Bradenton is maintained,” Gold said. 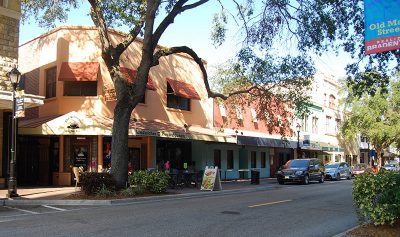 “Downtown Bradenton is fantastic,” said Kotlarczyk, who moved his establishment downtown six years ago, after being located for eight years across from the DeSoto Square Mall. “Come and explore. We have lots of things to offer all year around.”

He suggested the New Year’s Eve party on Old Main Street as a good event to experience for people who have never been to downtown Bradenton.

“The street will be closed to traffic, there will be entertainment, people walking around with drinks in their hands and checking out all the vendors,” Kotlarczyk said. “Also, most of the businesses will be open.”

For more information about the merchant association, visit its Facebook page at www.facebook.com/OldMainStreetMerchantsAssociation.

And to learn more about Bettes and her booking company, go to www.facebook.com/independentjones/. 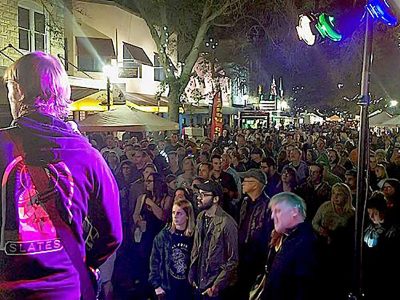