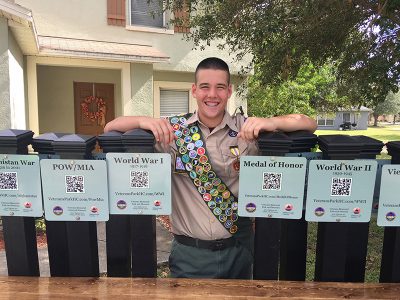 PHOTO COURTESY OF DALE DOUGHERTY
Colton Dougherty’s signs for Veteran’s Memorial Park in Tampa. The signs, an Eagle Scout project, include scannable codes for further information. Colton, 15, has earned 44 merit badges. He and his brother Carter are awaiting a review board to receive their Eagle Scout ranking.

Two Riverview Boy Scouts have reached scouting’s pinnacle early in life, at the same time, offering an educational experience and lending a hand to a charity.

Colton and Carter Dougherty, who are both home-schooled, are awaiting a review board to receive their Eagle Scout ranks, Boy Scouting’s top honor.

Colton, 15, and a member of the Navy ROTC at Spoto High School, lent his talents to
Hillsborough County Parks and Recreation, creating a set of signs for each of the war monuments at Veterans Memorial Park, which will help visitors connect with historical information about the wars and who created the monuments.

“We visited the Veterans Memorial Park on U.S. 301, and there really was a lack of signage and overall information,” he explained. “It didn’t have all this information to give you a good idea of what took place in that war. Or about who built and did the construction planning for the monuments.”

With the help of his fellow scouts, they put signs with QR codes — those black and white scanning codes — which allow park visitors to scan them using smart phones and connect with the park’s website. “I added those, working with the Veteran’s Park webmaster. I compiled some and received some from Veterans Park.”

Carter, 13, put his skills to work building a portable altar for Mary Help of Christians Center in Orient Park, which has a large, spread-out campus.

With the help of other Boy Scouts, Carter designed, constructed and stained the altar so it can be used even in inclement weather.

“I was originally going to do it at the church located closest to us, but they didn’t need it and suggested Mary Help because of their huge property and because they do a lot of moving around. It took like 90 hours and a month and half of building. We had 20 Boy Scouts and parents involved. 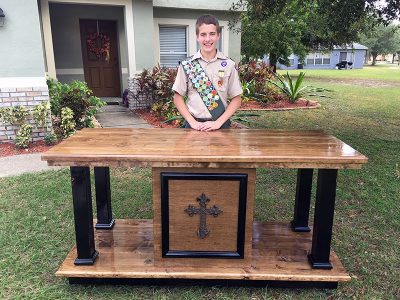 “I designed it and did the cutting and the younger boys helped with measurements and staining,” Carter said.

To earn the Eagle rank, scouts must have earned a total of 21 merit badges, 10 of which must be earned after receiving the Life rank. The badges they earn must include 13 specific badges, including Citizenship of the Community, Citizenship of the Nation, Communication, Cooking, Personal Fitness and Emergency Preparedness.

The boys’ mother, Alexandrea Dougherty, who home-schools them, said she was able to incorporate some of the merit badge requirements in to their studies, which helped them to achieve this high rank at a young age.

“Definitely, the skills and things they worked on for merit badges, we were able to incorporate that stuff,” she said. “For example, they did the auto mechanic merit badge. They worked on our cars. There are a lot of things they’ve learned from scouts and learned at home that they’ve been able to apply either way. It becomes a way of life.”

Carter and Colton are both members of Boy Scout Troop 83 in Riverview.