Looking up at the stars with the Deep Sky Observers 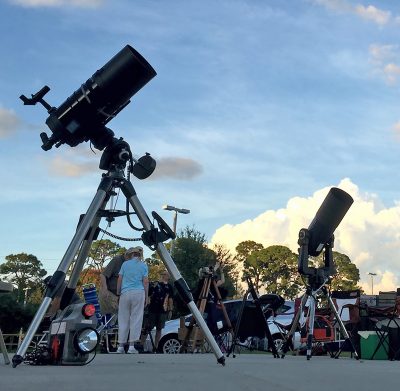 It was written that the three Magi looked to the skies to see the Star of Bethlehem in their search for the baby Jesus about two millennia ago.

On Saturday, Dec. 23, the Local Group of Deep Sky Observers, a Bradenton/Sarasota group of astronomy enthusiasts, will hold its monthly Sidewalk Astronomy event so the public can stare into the heavens.

“We draw hundreds to our events,” said Jonathan Sabin, president of the LGDSO astronomy club. “Most everyone enjoys looking through a telescope.”

Weather permitting, from 5:45 p.m. until at least 10, members of the group will set up their high-quality telescopes for public viewing in the parking lot of G.T. Bray Park, 5502 33rd Ave. Dr.W., just inside the entrance, off 51st Street West.

Highlights during the evening include observing the first quarter moon and the distant planets Uranus and Neptune. Other deep-sky wonders also may be visible through the telescopes.

The event is free of charge and is open to people of all ages.

Sabin said he was sure people will be impressed with what they can see through a powerful telescope.

“Everyone has seen the moon, but at 300 times magnification, people are amazed,” he said. “They realize there’s more out there than meets the eye.”

Chip Frappier, one of about 100 members of the LGDSO, agreed with Sabin.

“There’s so many fascinating items in the sky,” said the retired law enforcement officer with the Holmes Beach Police Department.

The experience of seeing the stars through a telescope can be surprising.

“Even if you’re not interested at first,” Sabin said, “when you look through a telescope you are amazed.”

He said 3,000 to 5,000 people a year attend the LGDSO Sidewalk Astronomy event and of that number, only one or two are not interested. 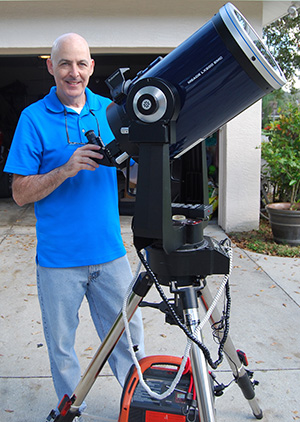 But the members of the LGDSO enjoy sharing their knowledge of the skies.

“Knowing what to look at makes it more fascinating,” Sabin said. “That is why we tell people at the event what they are seeing when they look through the telescope.”

People can observe remnants of a super nova, or a planetary nebula when a star enters its next phase of life.

And there are the planets to see up close.

“Nothing on earth matches the majesty of the rings of Saturn,” Sabin said.

Frappier, who helps at the Sidewalk Astronomy events, said seeing the reactions of some of the young teenagers when they look through a telescope for the first time gives him hope for the future.

“The first one I attended was at Johnson Middle School,” he said. “We had about a dozen telescopes set up in the parking lot.

“There were lines and lines of kids,” said Frappier, who lives north of Palmetto with his wife Beth. “One kid asked if he could use his cell phone to take a picture of what he saw in the telescope.

“It turned out fantastic,” he said. “He looked at me, and you can (sic) tell he was genuinely impressed, and he went and told all his friends.

“That sparked something in that kid and solidified my commitment to participate in the club events,” said Frappier, who has 34 years in law enforcement.

“Just that lesson alone may have made him take the right path in life,” said the retired police officer. “I learned to appreciate what this hobby can do in the life of someone — maybe enrich one’s life.”

Sabin said he got hooked on astronomy as a child after a trip with his parents to the Hayden Planetarium at the American Museum of Natural History in New York City.

Within a year of that visit, he was given his first telescope.

“It was barely a toy,” Sabin said. “A couple years later I got a better scope from a family friend and could actually see craters on the moon.” 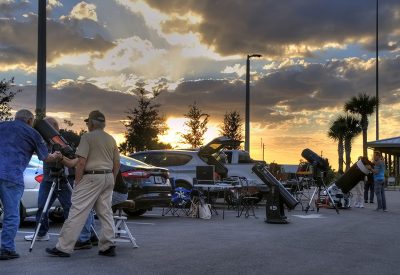 JONATHAN SABIN PROVIDED PHOTO
Local Group Deep Sky Observers members set up their telescopes in local parks once a month for the public to view the evening skies. Pictured is the November 2016 Sidewalk Astronomy event at the Celery Fields in Sarasota County.

Even after moving to Holmes Beach at the age of 15 with his family in 1967, his love for astronomy stayed strong.

“Astronomy has been a passion my whole life and when I started school (at Manatee High School) I made it known,” Sabin said. “Some friends told me about volunteering at the Bishop Planetarium (at the South Florida Museum).

He volunteered for four years until 1980, before becoming a fulltime employee as a planetarium specialist.

One of his jobs was to run the laser show, a popular light show put to the music of classical orchestras or rock bands.

“The rock shows always sold out,” Sabin said. “I was like a rock star to those who came for those shows.”

He also produced and ran the planetarium star shows.

“I still have the scripts from those shows,” said Sabin, who now lives in Ellenton with his wife Laural.

Frappier also said his interest in astronomy goes back to when he was a Boy Scout working on an astronomy merit badge. 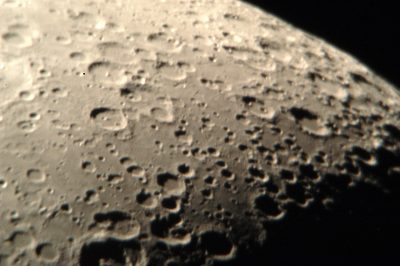 “I got interested again when my son Cory was in Boy Scouts,” Frappier said, “But he didn’t seem to take much interest.”

Cory has grown and now is a lieutenant in the U.S. Navy, but for all those years Chip’s curiosity in astronomy remained.

While working in Holmes Beach he heard two other officers talking about a star constellation.

“I looked up and thought what they said was wrong,” Chip said. “I came home and doubled-checked and I was right.”

In the course of doing the research on that constellation, his interest was restarted, and he purchased a small telescope.

After a while he needed a new lens and while at Norton’s Camera one of the store clerks told him about the LGDSO organization.

“I joined in 2002,” Chip said. “I wanted to learn more and go further than what I knew from Boy Scouts and reading in magazines that I subscribed to.”

Along with the Sidewalk Astronomy events opened to the public, the LGDSO also has quarterly meetings with guest speakers for members.

For more information about the Local Group Deep Sky Observers, visit its website at www.LGDSO.com.

Howard Hochhalter, a staff astronomer, will take visitors on a journey through Jerusalem’s skies as they were between 1 and 7 CE.

Tickets are $8 for museum members, $10 nonmembers.

For more information on the museum and shows, visit the website at www.southfloridamuseum.org or call 941-746-4131.