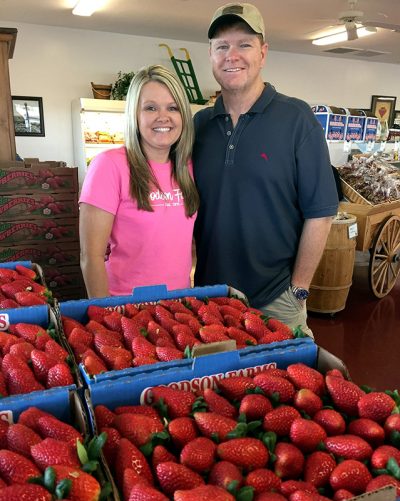 LOIS KINDLE PHOTOS
Jessica and Michael Goodson invite you to visit the Goodson Farms Produce Market at 12405 C.R. 672, Balm, for daily fresh-picked strawberries, all kinds of other produce and freshly prepared shortcakes, sundaes, sandwiches and more.

“Opening day (Dec. 6) was our busiest ever,” said Jessica Goodson, the market’s manager and one of its owners. “We had people lined up down the road.”

Since then, flats and quarts of freshly picked Treasures-variety strawberries have flown off its stands and, despite chilly weather, customers are coming in for the market’s popular strawberry desserts, including shortcakes, sundaes and pizza.

“Some people say they were told we’ve sold and closed down, and we don’t know where those rumors started,” Goodson said, who wants to put any such rumors to rest. “This is our business. We absolutely have no intention of selling.”

Goodson Farms has been in the family since Don and Janet Goodson started it in late 1970s. When Don died in 2003, his sons Mike and Ricky joined Janet as part owners until she passed away in 2011. Since then the brothers have fully owned and operated the business, and Jessica began managing the market in 2012. Jessica and Mike’s two adult children, Bryan and Brittni, are employees.

Until 2006, when the Goodson Farms Produce Market opened at 12405 C.R. 672, Balm, residents used to flock to a small, roadside stand at the corner of Balm Riverview Road and County Road 672.

Monica Padilla was one of those residents.

“I’ve been coming here since they had the roadside stand,” she said, sitting outside the market having lunch with her 2-year-old son, Fidel. “I just love the shortcake, and their sandwiches are delicious, too. I also like the service and how the employees are always smiling.”

The Goodsons farm is 1,500 acres spread over Balm, southern Hillsborough County and northern Manatee County. About 130 acres are devoted to three varieties of strawberries, Treasures, Florida Radiance and San Andreas.

The remaining acreage is used to grow their main crops — bell peppers and cucumbers, and cauliflower, cabbage, Brussels sprouts, yellow and zucchini squash, Cubanelle peppers, jalapenos and finger hots. All are primarily grown to be sold commercially to buyers along the East Coast and Canada.

“What we don’t grow, we buy from the Plant City Farmer’s Market,” Jessica said. 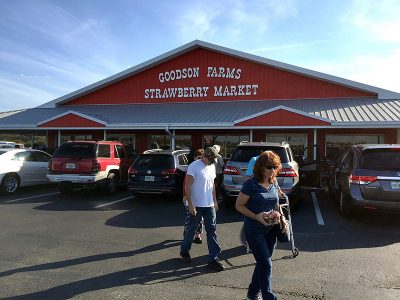 The Goodson Farms Produce Market opened Dec. 6 and will run through mid to late April, depending on the weather.

The company has 50 to 60 full-time employees and about 300 seasonal workers.

Half-flats of strawberries are sold for $12 and quarts at $3.50. All are picked fresh daily and any not sold that day come off the shelves and go into the kitchen. This year, customers can get whole plain cakes and chopped berries to make their own strawberry shortcake at home, and soon, early birds can purchase a limited supply of freshly made strawberry muffins.

“When they’re gone, they’re gone,” Jessica said, adding that like Goodson’s whole strawberry pizzas and cakes, patrons can place orders for the muffins in advance.

Goodson Farms Produce Market is open from 9 a.m. to 6 p.m. Monday through Saturday now through mid or late April.