Despite gray weather, the 2017 Golf Cart Parade was another hit 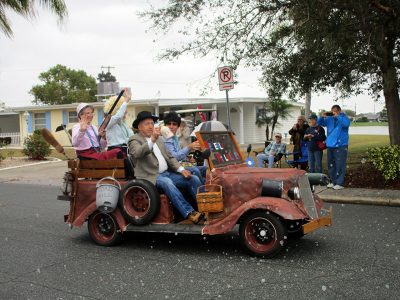 The weather wasn’t exactly delightful for the 2017 Sun City Center Golf Cart Parade on Dec. 9, but it certainly wasn’t frightful. There were plenty of chuckles and wonder along the parade route as onlookers were awed by the ingenuity on display by the 50 or so cart entries.  The theme was Holiday Movie Madness and Memories, which apparently stoked the imagination and memories of the participants and those who watched them drive by.

There was an abundance of happy people as prize and raffle winners were announced from the gazebo on the SCC Community Association’s Central Campus. Nine prizes were given for decorated carts and four cart owners received raffle prize money for simply participating. Minto Communities donated all the prize money.

In the Individual decorated cart category, first place went to David Fitzgerald who had transformed his golf cart truck into the Beverly Hillbillies vehicle. “As soon as the parade theme was announced, the idea came quickly since our golf cart is a truck,” he said. Granny (wife Phyllis) and Ellie-Mae (daughter-in-law Maureen) sat in the truck bed while Jethro (son Jody) drove and Jed (David) rode shotgun.

In the Group category, the Irish Connection creativity was on full display with a MASH Christmas red helicopter. In the Business category, Freedom Plaza (Retired Officers Corp.) reminded us all to appreciate our freedom with their patriotic-themed White Christmas cart.

KC Chilton no doubt sported the biggest smile of the day when she learned she had won the Precedent Club Car raffled by the SCC Security Patrol as a fundraiser project. She said she bought five tickets at the Holiday Breakfast as a birthday present for herself—and its lime green, which is her favorite color. The patrol had been selling raffle tickets for several months, and Interim Patrol Chief Gil Jesse said they appreciated the community’s support in this fundraising effort.

Minto Sr. V.P. William Bullock was grand marshal of the parade in recognition of the company’s contributions to the Sun City Center community. The seventh annual Minto Winter Festival added merriment to the day with entertainment by Victoria Gentry and food trucks and vendors of all kinds. (This was the last festival to be sponsored by Minto. The company expects to depart SCC mid-2018.)

The parade committee wrap-up meeting on Dec. 14 was upbeat as members recounted events of parade day and turned their sights to the future.  “We appreciate all the volunteers and participants—and those who came out to watch—who made the parade possible,” said Chairman Howie Griffin. 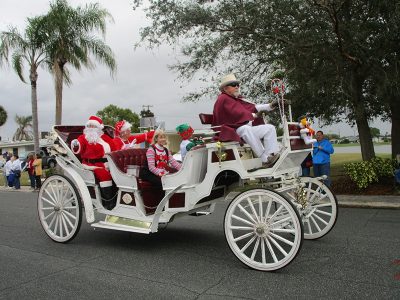 No Christmas holiday parade is complete without Santa and Mrs. Claus (aka Bob and Pat Sullivan). The carriage is driven by Dave Ducharme with wife Sue and grandson Nathon enjoying the ride. This is the third year Ducharme has given our Sun City Center Santa a ride. 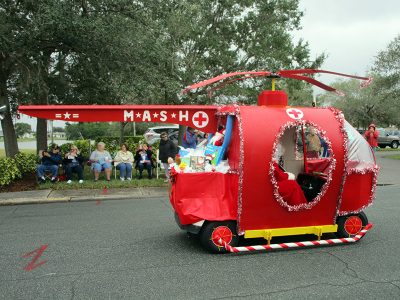 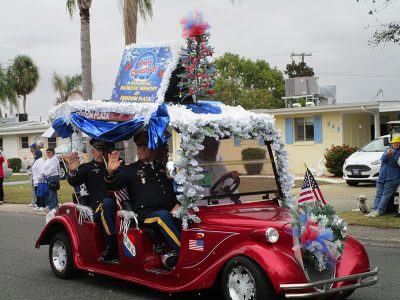 With Freedom Plaza’s patriotic-themed White Christmas entry, they reminded us to appreciate our freedom.