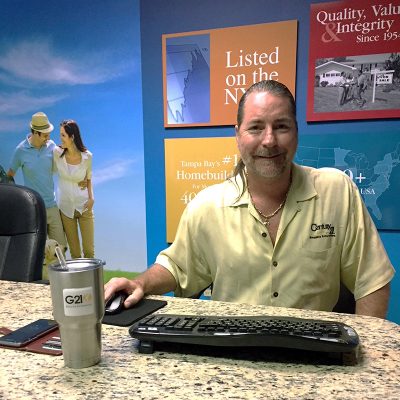 LOIS KINDLE PHOTO
Craig Beggins, 49, founded Century 21 Beggins Enterprises 25 years ago. His company is rated 14th out of 7,800 Century 21 franchises throughout the world, 12th in the country and first in the Southeast, including Florida.

Apollo Beach resident Craig Beggins has spent virtually all his adult life in the real estate business. So it’s no surprise to anyone who knows him that his company, Century 21 Beggins Enterprises, is number 14 out of 7,800 Century 21 franchises worldwide, number 12 throughout the United States and number one in the Southeast, including Florida.

Some would say that’s quite impressive for a man who’s only 49 and whose company   celebrated 25 years last June.

And some would add Craig has his father’s success genes.

“My dad (Jim Beggins) started a master franchise for Century 21 in Florida in 1973,” he said, adding that over the next 10 years his father established hundreds of offices from Orlando to Key West. “Then he sold everything to his partner and moved our family to Tampa (in 1984) to become a real estate developer. He developed, built and sold properties in Symphony Isles through his companies  Symphony Realty Development Corp., Symphony Builders and Symphony Realty.”

“My first job was working for him as a grunt, scraping slabs and cleaning up construction sites,” he said.

After graduating high school, Craig enrolled in classes at the University of Florida and earned his real estate license at age 19. During his second summer in college, he worked in the Symphony Realty model home center and earned $7,000. That’s when the career bug hit him.

“I drove back and forth to Gainesville until my senior year, and then transferred to the University of South Florida and graduated with a degree in business management,” Craig said. “My dad made me a deal if I graduated college and got my broker’s license, he would give me half of Symphony Realty.” (The other half was owned by his mom Victoria.)

“The real estate market was terrible at the time,” Craig said. “About all that was here in Apollo Beach back then was the Holiday Inn, Circle K and Apollo Meats.

“I sold the Holiday Inn three times,” he mused.

Ironically, Symphony Realty was competing with Century 21 Remke Realty at the time, a franchise Craig’s father had sold to Bob Remke many years earlier. Remke, who was a builder at heart, offered to sell Craig his franchise.

In June 1992, Craig and his wife, Angelique, took him up on the offer, bought Century 21 Remke Realty, merged it with Symphony Realty and renamed the company Century 21 Beggins Enterprises. He was 23.

With the purchase, the entrepreneur acquired five agents.

“Three of them quit because they thought I was too young,” Craig recalled,    franchise owner, he trained in Ft. Lauderdale.

“There were no smart phones, no computers back then; every transaction was on paper,” he said. “Most of the other franchisees at the time were older, and many were ready for a change in focus or wanted to retire.”

That would create growth opportunities in the future.

Another bit of irony

In 1993, Aixa Moore, one of the agents who stayed with Beggins and is still with his company, worked with Eileen and Joe Eletto when they came to look for property in Apollo Beach. Ten years later, Eileen was hired as Craig’s executive assistant and her husband, Joe, now one of Beggins’ top-selling agents, joined the company in 2005.

In the second half of the ’90s, Craig began adding franchise offices. The first was in Sun City Center in 1996, followed by Madeira Beach and Indian Rocks in 1998 (when his brother, Jeff, became involved in management). Craig operated his company out of those three sites and his main office in Apollo Beach until 2005.

That year, he merged Century 21 Beggins Enterprises with List Realty in south Tampa, which became List with Beggins. Offices in Sarasota and Long Boat Key were added in 2013, and in Lakewood Ranch and Brandon this year.

It hasn’t always been a cakewalk.

During the Great Recession, when the real estate bubble burst, the company almost went bankrupt. To keep it in business, Craig, Jim and Victoria Beggins all took substantial cuts in their personal salaries to keep the doors open.

“I was so impressed,” Eileen Eletto said. “The staff went five years without an increase, but our pay was never cut. Everyone stayed; no one was fired. We all knew the sacrifices Craig was making to keep the company solvent.

“That’s the kind of man he is,” she continued. “He’s honest, caring, and he really wants his people to be successful.”

“I’m excited about 2018,” he said. “I think Tampa Bay is one the best values in the country. As our market grows and our airport adds more direct international flights, it will attract foreign investors and increase the demand for properties in this area.”

And despite rumors to the contrary, real estate agents will always be a necessary factor in the purchase of a home, he said.