Chris Scigliano lost his life while directing traffic during a fundraiser he organized for an HCSO deputy. 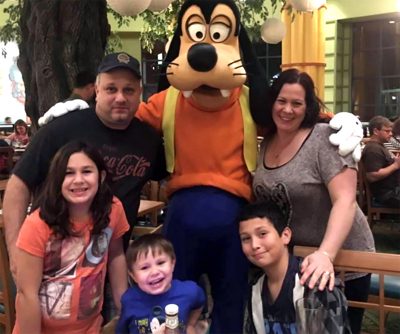 Photo from Chris Scigliano Facebook page
Tributes from the community have poured in for Chris Scigliano, 44, killed in a tragic accident Dec. 2 while directing traffic during a community fundraiser. He was the owner of Way Back Burgers in Lithia.

Chris Scigliano left behind a legacy of charity, love and friendship. He was a doer, friends say.

When he wasn’t managing his Way Back Burger franchise in Lithia, he was busy with his wife and three children, planning charity events, standing up for local causes or imagining his next adventure.

Scigliano, 44, was killed in a tragic accident Dec. 2 as he was directing traffic in Lithia during a scholarship fundraiser in memory of Hillsborough County Sheriff’s investigator Larry Morrell, who died from cancer in June.

On a Facebook page created to share memories of Scigliano, more than 240 people signed up to be part of it.

They also came together Dec. 6 — more than 250 of them — to remember the man they say had such a positive impact on their community.

“Chris was the funniest, craziest and most selfless man I knew,” wrote Jordan Davis on the Facebook page. “He gave me my first job at 16, my first management position at 18 and always told me I would own my own restaurant one day.” He was constantly involved in one charity or another, she said.

“I wish I could go back in time to thank him, because he has grown me into the hardworking and dedicated person I am today. You’ll be missed boss!!”

“Chris was one of these dreamers,” recalled longtime friend Bob Abruzzese. “He’d always come up with these big ideas. He’d say ‘I’m gonna open up this store or do that.’ Everything he wanted to do. He would say he wanted to get the firetruck with Santa. Next thing you know, he’d have it.

“He made it snow three years in a row in FishHawk,” Abruzzese said.

Before purchasing the Way Back Burger franchise, Scigliano owned and operated Scigliano’s, a New York-style deli in FishHawk. He organized a Winterfest to benefit Toys for Tots, ran the concession at the FishHawk Ranch Sports Complex for a couple of years and served as a little league volunteer.

George Shea, who had known Scigliano for years, sat on the firetruck or participated in Breakfast with Santa as the Jolly Old Elf at his friend’s urging.

“I think he will be remembered as someone who was always doing stuff for others, people in need,” Shea said. “He was pretty much a go-to guy for fundraisers. Kind of a selfless guy who did things to help better the community.

“Times have changed a lot, with people and traditions and holidays,” he said. “People talk but they don’t always follow through. “There are talkers and doers and Chris was a doer.

“The community, as a whole, I  expected a huge response, but the support and impact he had on all these lives is just overwhelming,” Shea said. “He was a family man, an entrepreneur and is going to be missed by all. A guy like that, they just don’t come around very often.” 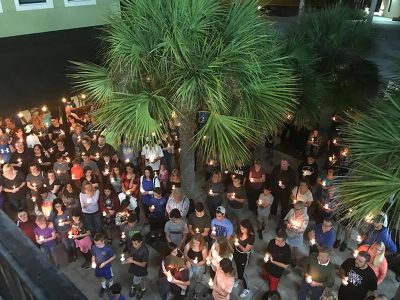 Photo from the George Shea Team
More than 250 people from the FishHawk and Riverview community turned out for a candlelight vigil Dec. 6 to honor community activist Chris Scigliano, 44, killed in a tragic accident Dec. 2 while directing traffic during a fundraiser.

“I met Chris when he joined an advocacy group I started to protect pedestrians and our children walking to school,” Josephine Amato wrote on the memorial Facebook page. “He became an active participant in advocating for our children and safe paths for pedestrians in Hillsborough County. He spoke of his wife and children with great love. He was one of the few local business owners that spoke up publicly to get our children their school buses back and let students stay at his business to wait for their parents in a safe place.

“Scigliano would call legislators and county commissioners and speak out to the media on behalf of various causes,” she said. “He would always stand up and speak up when we needed him to for the kids. As a fellow New Yorker, we would share our New York, back-in-the-day stories. He was always respectful, kind and truly cared about the safety of others.

“I was honored to have worked with him and know him,” Amato said.