Christmas shopping on the beach: The outdoor market at Coquina Beach 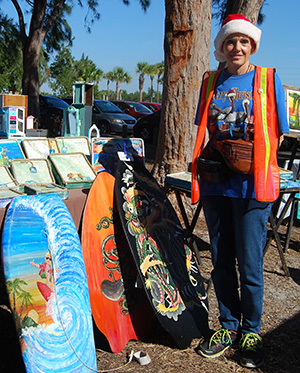 CARL MARIO NUDI PHOTOS
Nancy Ambrose, who was an events and convention organizer in Atlanta before moving to Florida more than 20 years ago, started the Beach Market on Coquina Beach five years ago to give vendors a venue to sell their wares.

The holidays are coming up fast, and the tradition of exchanging gifts comes with it.

Northerners have to slog through mushy, melted snow and bundle up in heavy winter coats to ward off the biting cold winds to do their Christmas shopping.

But the rules are different in Florida.

We have sunshine and the fresh, salt air.

And one of the best places in the area to do your shopping for the holiday season is at the Beach Market at Coquina Beach.

“There’s an excellent gift selection,” said Ernestine Bettis, who was at the outdoor market for the first time Dec. 3 with her husband, Grady Bettis Sr.

“And a great place to have a market — on the beach,” the Hillsborough County resident said.

“This is the fifth year for the Sunday market,” said organizer Nancy Ambrose, “and the second for the Wednesdays.”

Ambrose, who recently moved to the mainland after living on Anna Maria Island for almost 20 years, said she started the Beach Market on Coquina Beach for the vendors.

She started the Bridge Street market several years ago and then moved to a lot next to the Gulf Drive Café.

When that market closed, several of the vendors asked her to organize another one and after looking for a location on Anna Maria Island settled on a spot just beyond the parking lot at Coquina Beach.

“The success has been unbelievable,” said Ambrose, who did event and convention organizing in Atlanta before moving to Florida. “When we started five years ago we had between 22 and 28 vendors a week.

The vendors, lined up under white canopies along 1,200 feet of the paved walkway trail under the shade of the Australian pines, offered a wide variety of products, such as fresh produce, original art, handmade jewelry, yard art, apparel, crafts, packaged foods, collectibles and many other items.

Ambrose limited the number of vendors selling the same items, such as jewelry.

“We make sure there’s a mixture of vendors,” she said. “Too many of the same items turn people off.”

The Beach Market has become very popular, drawing thousands during the season. 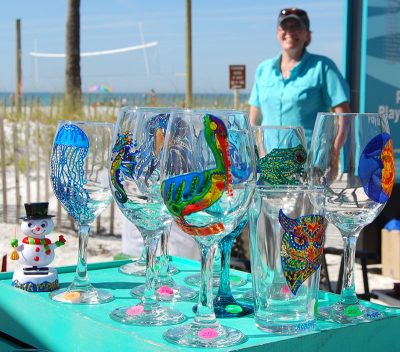 Visitors are attracted to the bright colors of the hand-painted glassware at Robin Feist’s booth, Dream In Color Art Glass Studio.

“People love it,” Ambrose said. “There’s something for everyone.

“I heard a man tell his wife, ‘you drag me to all kinds of things, but this is the best,’” she said.

The vendors love it also.

“What’s not to like,” said Ken Almeida, the artist behind Kea’s Acrylics. “I make a little bit of money, do what I love, and meet wonderful people on the beach.”

Almeida, who lives in Colony Cove in Ellenton, retired as a professional musician in 2004.

“After retiring I puttered around with painting,” he said. “I’m self-taught.”

His paintings reflect his interests.

“I see something in the paper or a magazine, or on TV, and put my twist on it,” said Almeida, who moved to Florida with his wife, Judy, from New Bedford, Mass.

He also paints subjects common to the area, such as sailboats, beach landscapes and manatees.

Almeida has been at the Beach Market from the beginning, having worked with Ambrose at the Bridge Street Market.

But even newcomer vendors enjoy the Beach Market.

“I’ve met a lot of people from other countries,” said Jason Bruns, with Dec. 3 being only the second Sunday he has been selling his homemade organic elderberry syrup at the Beach Market.

And those foreign visitors are familiar with the medicinal benefits of the product named after his wife, Dawn Marie’s Elderberry Syrup, he said.

“It’s a natural remedy for different conditions, such as allergies and arthritis,” said Bruns, who lives in Palmetto. “It also works great if you have a cold coming on.”

He said he started the business because he was buying elderberry syrup online for personal use and thought he and his wife could make it themselves.

Bruns said they use all organic ingredients since they began making the syrup in April, including the elderberries, raw honey, cinnamon, and cloves. They also use water filtered through a reverse osmosis system.

“We liked it, our friends liked it, and it became a small business,” said Bruns, who is a recruiter in the healthcare industry during the week.

Three sisters, Candice Ohler, of Ellenton; Chris Rodkey, of Bradenton; and Betty Suggs, of Parrish, also recently started their business and were at the Beach Market for their first time Dec. 3.

Handmade Christmas wreaths, ornaments, and decorations can be found at C&B Crafts, the business name the three sisters gave their enterprise.

“We liked doing crafts,” said Ohler, “so we thought we should go into business about a year ago.

“We will offer items that change with the season,” she said.

“We have items good for people from out of town,” Ohler said. “They’re small to pack and at good prices.”

“Our bracelets run from $35 to $65,” Lylia Nilsen said. “We keep our prices reasonable.

“We have customers coming back every year to buy more bracelets,” she said. “They make great gifts.”

Nilsen, who lives in Ellenton, was with Ambrose at the Bridge Street Market and has been at the Beach Market from the beginning.

She had been a real estate broker in New York and started selling jewelry after she had a serious accident. 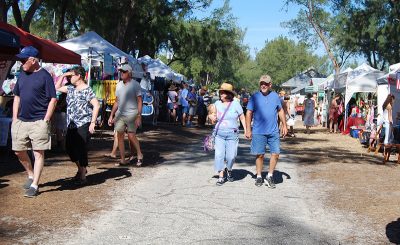 Hundreds of visitors stroll every Sunday, from November through July, along the Coquina Beach paved walkway under the shade of Australian pines, just off the sandy beach to check out the items for sale at the Beach Market on Coquina Beach.

“I was in a wheelchair, and I had to make a living,” Nilsen said. “I always loved rocks and minerals, and crystals were popular.”

Having tried selling at various other venues, such as mall kiosks, Nilsen said she settled with the Beach Market.

“The diversity of the market is great,” she said. “You can’t get bored because there’s something different at every booth.

“And the ambiance of the gulf and beaches is wonderful,” Nilsen said.

For Robin Feist, owner with her husband, Ron, of Dream In Color Art Glass Studio, it is the family atmosphere of the market that she enjoys.

“I started painting glassware when I wanted a pretty wine glass for myself,” Feist said. “Then I made some for gifts for friends, who liked them.

“I also would give them away,” said the snowbird from Michigan who stays at the recreational vehicle park in Cortez during the winter months.

“We vendors give our wares away to each other all the time,” Feist said. “We all like to give back and forth like a big family.”

This is their third year at the Beach Market, which they found as shoppers when they first came to town.

“It’s beautiful along the beach and there’s a lot of (foot) traffic,” said Jones, who was selling Italian Olive Salad from Jay’s Market Place in St. Petersburg.

“For our first time here we did very well,” Jones said. “And we met some great people.”

For more information on the Beach Market, check its Facebook page at www.facebook.com/BeachMarketAtCoquinaBeach.

Most of the vendors also have a presence on Facebook.