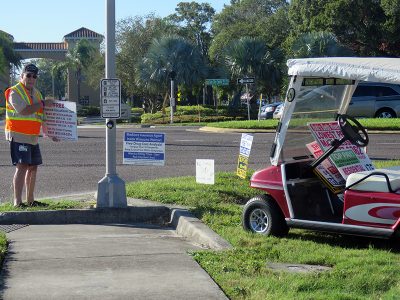 Do you ever wonder about those commercial signs offering everything from carpet cleaning to house buyers and sellers that litter our roadsides?  Some questions that might come to mind are:  Are they legal? Who removes them? When? Are the businesses ever reprimanded?

These snipe signs, as they are often called, are definitely illegal and violate Hillsborough County sign codes. A snipe sign, according to Hillsborough County Code Enforcement officials, is commonly used to describe signs attached in any way to a utility pole, tree, fence post or any other object located on county property. It’s a slang term for these prolific eyesores. They are hard to miss…and that’s the idea. Last year, the code enforcement staff removed 46,828 signs from county roadways.

Lauren Daniel, HC Code Enforcement general manager, said county staff remove the signs, but residents with an intense dislike of them can help too by becoming an authorized representative in the Volunteers in Public Service (VIPS) program. It isn’t illegal for any resident to remove signs since they are considered litter. It is generally discouraged, however, because it could lead to an altercation if confronted. All VIPS reps, after a background check and training, are issued a vest, hat and name tag identifying them as a county representative. Last year volunteers removed 10,456 signs.

Sam Sudman is the VIPS rep for Sun City Center and has been for about three years. He mainly concentrates on S.R. 674 where he removes an average of 20 signs a month. Asked why he does this in addition to his already busy schedule, he replied, “These signs are a blight on the community and run contrary to the image we are trying to maintain.  The SCC Beautification Committee works hard to keep the medians attractive and this is one way I can help.”

During VIPS training sessions, volunteers develop a sense of which signs to target. For example, if a sign advertises an upcoming event, it’s pretty evident that the placement is temporary and will soon be removed. Also, caution must be used because that event sponsor may have a permit for the signs. Most snipe signs are simply a nuisance; they can deteriorate and turn into litter. More seriously, they can distract drivers or become dislodged, presenting a potential hazard to pedestrians and vehicles during inclement weather.

Daniel, when asked whether her department ever contacts the businesses who post the signs, said they do indeed contact repeat offenders. The first step is a warning, then citations are issued. With each subsequent violation, the amount of the fine increases.

You can find extensive information about the county’s sign code at hillsboroughcounty.org/hcce. To learn more about the VIPS program, email Lauren Daniel at daniell@HCFLGov.net.