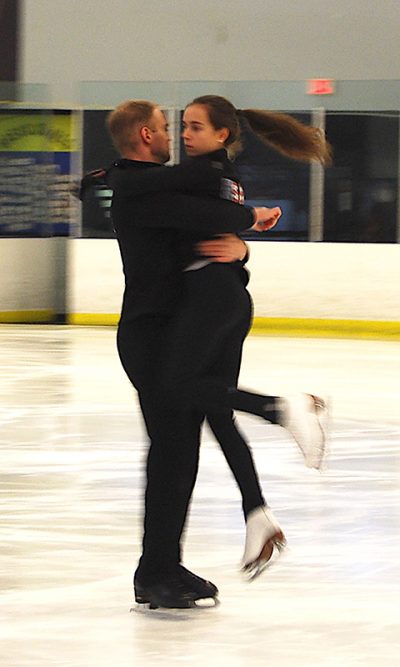 CARL MARIO NUDI PHOTOS
Jessica Pfund, 19, and Josh Santillan, 25, perform one of their routine movements during a practice session at the Ellenton Sports and Ice Complex training center. Pfund and Santillan are one of three skating pair teams training at the Ellenton facility to qualify for the 2018 Winter Olympics in PyeongChang, South Korea in February.

Over the years, world-class athletes have been coming to Manatee County to train at some of the best sports facilities.

For example, tennis greats such as Andre Agassi and Maria Sharapova have trained at IMG Academy, and the Pittsburgh Major League Baseball team, the Pirates, have been coming to Bradenton for spring training for almost 50 years.

There also is a nationally known training facility for champion skaters north of the Manatee River.

“We have excellent facilities for training skaters,” said Shannon Raley, figure skating director for the Ellenton establishment. “This also is where some of the top coaches are based.”

All three pairs are training to compete in the 2018 U.S. National Figure Skating Championships to be held Dec. 29 through Jan. 8 in San Jose, Calif.

This will be the final qualifying event prior to selecting the single senior pair spot on the U.S. Olympic Figure Skating Team.

Because of the figure skating governing body in the United States, U.S. Figure Skating regulations, there will be only one senior pair on Team USA in the 2018 Winter Olympics being held in PyeongChang, South Korea in February.

“It’s especially hard this time (to qualify for the Olympics) with the old rules,” Santillan said.

“That was why the national championships in San Jose are important, she said.

“Our only goal is to improve over last year,” said Pfund, who has been Santillan’s skating partner for two and one-half years, “and to surprise people on how much we have improved.”

“The nationals this year are very tough,” Santillan said, “So you can score high but place lower.”

Pfund and Santillan placed fifth in the 2017 U.S. National Championships and seventh in that 2016 competition.

Unlike many of the other Olympic sports, there are no tryouts for figure skating.

Qualifying for the Olympics is based on weighted scores skaters receive in specific competitions held over the four years between the Winter Olympic Games.

There are about 16 teams in the United States training to qualify for the one senior pairs spot in the Olympics.

For Kayne, who has been skating since she was 6 years old, being in the Olympics has been the main goal in her skating career. 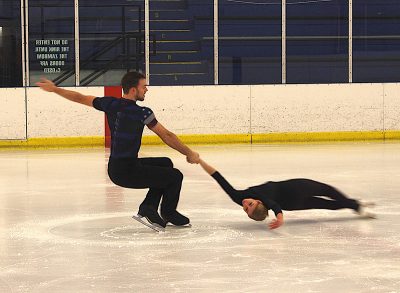 CARL MARIO NUDI PHOTO
Danny O’Shea, 26, and Tarah Kayne, 24, perform a death spiral skating movement during their practice session at the Ellenton Sports and Ice Complex training center. O’Shea and Kayne are one of three skating pair teams training at the Ellenton facility to qualify for the 2018 Winter Olympics in PyeongChang, South Korea in February.

O’Shea, who has been Kayne’s skating partner since 2012, said they came to the Ellenton facility specifically to train with skating coach Jim Patterson.

“When we decided to become a pair we knew where we wanted to train — Ellenton,” he said.

They both agree personality and character are important in becoming a successful skating pair team.

“We get along very well, and we have the same work ethic,” said Kayne.

“Personality is a huge part,” she said. “You have to get along and work together.”

O’Shea was Kayne’s first skating partner and they were gold medalists in the 2016 U.S. Championships.

“We just clicked,” said Kayne. “In the beginning we sometimes butted heads.”

“We both have type-A personalities,” said O’Shea. “But you have to learn to compromise.”

“You really just learn how to make it work,” Kayne added.

Pfund and Santillan agreed character and personality have to fit for a successful skating pair.

They became partners after they had competed against each other in a skating event and knew that they would work well together as a pair.

“Josh is a great partner,” Pfund said. “He’s had great success, a good work ethic, and we get along well.”

“Some partners don’t have the same goals,” she said.

“We like to set a lot of goals, and we don’t keep them to ourselves,” Santillan said. “You have to be accountable to each other.”

Their coach, Lyndon Johnson, said a pair’s goals have to be their own.

“I had a young girl years ago whose parent and grandparents had a goal for her,” he said. “But sometimes that backfires, and they drop out.

“What I like about Josh and Jessica is their motivation,” Johnston said.

A typical training day starts with about 40 minutes of warming up on the ice, then an hour practicing with your partner and coach, a break, then another hour of pairs practice.

Then each skater works on his or her form individually for about 45 minutes before finishing the day with about two hours of a fitness workout in the gym.

Stellato and Bartholomay teamed up in summer 2016 and train under Peterson along with Amanda Evora and Johnston.

Stellato had been retired for 16 years and Bartholomay’s former partner retired, according to Raley.

“Nate still wanted to compete, so a chance meeting had them schedule a tryout, and here they are one year later trying to make the Olympic team,” she said.

The Ellenton Sports and Ice Complex, 5309 29th St. E., Ellenton, has been the training center for skaters competing to qualify for the 2010, 2014, and 2020 Winter Olympics and other national and world competitions.

They placed fourth in the 2017 U.S. Championships and Bartholomay was an Olympian with Felicia Zhang at the 2014 Olympics in Sochi, Russia.

Stellato was the 1999 Junior Grand Prix Ladies Champion and 2000 World Junior Silver Medalist, but due to an injury she retired at that point, Raley said.

The community will have a chance to watch two of the pairs teams, Pfund and Santillan and Stellato and Bartholomay, perform their routines at the annual holiday show, Skating Spectacular, Dec. 9 at the Ellenton Sports and Ice Complex. Kayne and O’Shea will be at a skating competition that weekend.

The 70-minute show will feature skaters taking lessons or training at the ring, from beginners to adults.

“The ages start at 1 and go up to 75,” Raley said. “This showcases everything we do here.”

The 3:30 show was sold out, and tickets are going fast for the 6 p.m. performance, she said.

As a professional skater, Raley has experience appearing in ice shows herself, having toured with Disney on Ice for several years before moving to Parrish in 2000 with her husband Bill Raley.

Bill works for Feld Entertainment in Palmetto, the producers of Disney on Ice and other shows.

Ellenton Ice also is home to many novice and junior skaters who have their eyes set on the 2022 Winter Olympics, Shannon Raley said, and has been the training site for Olympians from both the 2014 and 2010 Winter Olympics.

For more information on the 2018 Olympics in PyeongChang, South Korea, visit the website at www.olympic.org

More information about the Ellenton Sports and Ice Complex is at www.ellentonice.com or www.facebook.com/pg/ellentonice/posts/