Home News Giving from the heart: Alpha Pizza House patrons reach out to mothers in need at Alpha House of Tampa
News

Giving from the heart: Alpha Pizza House patrons reach out to mothers in need at Alpha House of Tampa 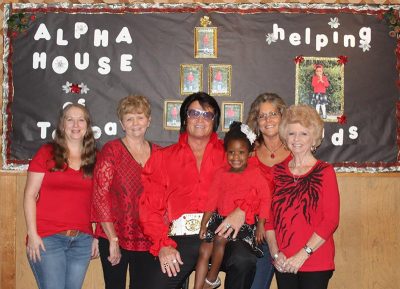 PHOTOs COURTESY OF MICHELLE KNOOP
Some of the many who give from the heart at Alpha Pizza House in Apollo Beach (from left): Michelle Knoop, Kathi Gibson, Billy Lindsey, Lori Lindsey, Marci Johnson. And Autumn.

As many good things do, particularly this time of year, it all began with a child. And for the patrons of Alpha Pizza House, Autumn was, and remains, a very special young lady. While she stole their hearts, they chose to give it willingly.

For those at Alpha Pizza House, there were no thoughts of tax deductions or 501(c)3 organizations; there were no lawyers or formalities — they simply passed around a bucket to collect some money to help Autumn’s mother. It was Christmastime, and Christmas is supposed to be magic. And with each bill tossed into a bucket, there was a little more magic. It was giving in the purest sense: It came from the heart.

And with that, the customers and staff of Alpha House in Apollo Beach began helping mothers at Alpha House of Tampa — a nonprofit organization dedicated to helping single mothers get back on their feet and make their way in life.

“We met Autumn and her mom…they are a great family,” said Michelle Knoop, an Alpha Pizza House customer and one of the organizers of their Christmas giving. We also liked Alpha House of Tampa, coming from Alpha House here.”

Knoop credited Kathi Gibson, a bartender at Alpha Pizza House (in Apollo Beach) of getting it started. “Kathi asked around and we all said, ‘We’d love to do that,’” she said of Gibson.

“Autumn makes everyone smile when she comes in here,” Gibson said. “Everyone knows her. If you don’t know her when you come in, you will know her.”

The expansive bar at Alpha Pizza House could well be like that seen on a television set. It is all that most people expect and then some. There are a significant number of regulars for whom the people and camaraderie make it a home away from home. But with that, it is not inclusive. Newcomers are welcomed with open arms. Sometimes literally.

“This is an amazing place,” Knoop said. “It’s like a real-life Cheers.”

Although so many factors come together to create such a place, from the staff to management, Gibson credits the customers.

They raise money in a simple way — there are no expectations, there is no pressure. They simply pass around a bucket.  Moreover, Gibson said that it is often the customers themselves who say, “Hey, give me the bucket,” and then begin to pass it around.

“What’s really good about this place is the people here. They will donate every single time — even if it’s a dollar, two dollars, whatever.”

For Autumn’s mother, Yvette Daniel, things have changed since she and Autumn first walked into the hearts of those at Alpha Pizza House. Daniel is still at Alpha House of Tampa but now as a paid member of the staff. She graduated from the University of South Florida in December and is working an overnight shift while continuing her education into post-graduate work.

And this year the customers and staff of Alpha Pizza House are trying to help not just one mother, but 29 mothers at Alpha House of Tampa. Again, giving purely from the heart, they hope to make Christmas brighter for their children. It is difficult for many parents at Christmastime. It is even more difficult to be a struggling single mother, searching and hoping for open doors to lead to a brighter future for their families.

“Alpha House of Tampa is about helping women to grow a better life and to give them opportunities,” Gibson said. “With people willing to help, they don’t have to worry about the pressure of buying food or buying a gift for their children.”

In the season of giving, at Alpha Pizza House, people are coming through in the spirit, a dollar or two at a time, but adding up to real results.

“I think we raised about $1,600 last year,” Knoop said. “What’s really great about the whole program is that everyone at Alpha (Pizza) House, from the customers to people who work here, get involved in this. They are excited about giving.”

At Alpha Pizza House, they are not keeping score or trying to rack up good-will points. Both Knoop and Gibson encouraged everyone to give to Alpha House of Tampa in any way possible, including through the organization’s website. But they would love to see people coming into the restaurant.

“Go, have dinner and a drink, and help a struggling mom for Christmas,” Knoop said.

But to make it easy, they plan to leave a donation box by the door. Knoop also pointed out that the Dollar General in Apollo Beach also has a collection box for the children at Alpha House of Tampa.

From the donations, the mothers will receive gift cards, allowing them the dignity and joy of shopping for their own children at Christmas. But it is so much more than that. There is the joy of giving. There is the promise of making a real difference in the lives of those striving to make better lives for their families.

“It’s giving them a hand up rather than a hand out,” Gibson said.

Alpha Pizza House will be collecting freewill donations until Dec. 21. The restaurant is at 1312 Apollo Beach Blvd., Apollo Beach.

For more information about Alpha House of Tampa, visit www.alphahouseoftampa.org.