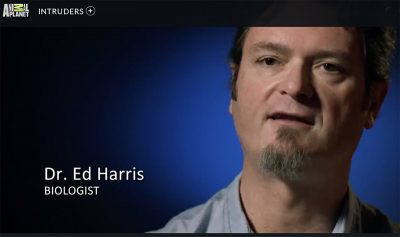 Linda Harris knew a future was brewing for her gifted youngster from the time he was 2, collecting bugs, snakes and lizards.

By the time he was 10, she found him in his room at 3 a.m. with the microscope his grandmother had gifted him, examining pond water and taking note on his findings.

Today, Dr. Ed Harris, who grew up in Ruskin, is teaching evolutionary biology to postgraduate students at Manchester Metropolitan University in England as a senior lecturer.

He is also featured on five episodes of Animal Planet, airing each Sunday night through this past week. All the episodes can be viewed at www.animalplanet.com/tv-shows/intruders/.

“I cannot claim that this is the highest point in my scientific career necessarily, but I had a great time doing something different, and I would love to do it again if I had the chance,” he wrote in an email from England.

The East Bay High graduate who wanted to be a musician, focused back to his love for science a few years out of high school and ended up receiving a string of degrees starting with his bachelor’s degree in biology from the University of Tampa, a doctorate in Ecology from Purdue and post-doctorate work in behavioral genetics and evolutionary genetics from the University of Manchester.

Yes, he is focused and with a vengeance, said his mother Linda, who still lives in Ruskin.

“I’d say I have loved biology and animals since I was a child,” he said.  “I grew up in Ruskin and went to Ruskin Elementary, then on to Progress Village, Eisenhower and East Bay.  I spent most of my childhood turning over rocks looking for snakes and insects; also playing on the gulf shore and around Tampa Bay.  I did my PhD in Evolution and Ecology at Purdue University.  I have lived in the UK for about 15 years, having come over here for a postdoctoral research position in animal genetics at the University of Manchester. 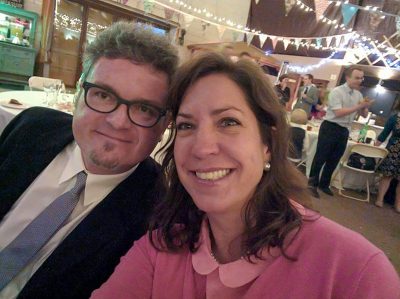 “Most of my current research involves using genetics tools to study animal movement in the wild and captive management of animal genetics in zoos.  I work on a range of different species currently, like the Hazel dormouse in the UK, the grayling (fish) in Europe and the mountain bongo in Kenya.”

For the Animal Planet show, Ed was contacted by a media company making the Animal Planet series. “They were looking for someone with an American accent, but based in the UK, who could speak as an expert about insects, small mammals and reptiles.”

He was filmed with people in and outside their homes, answering their questions about all sorts of animals and pests.

“I basically was filmed answering a lot of questions — I mean a lot of questions — for about 10 hours, ranging from basic zoology, like ‘what is the difference between rats and mice,’ or, ‘why would a Florida panther eat a goat.’  I believe there are five episodes and I appear as a ‘floating head’ expert in each one.  The last episode is ‘Intruders.’”

Initially, the Animal Planet crew wanted Ed to film in London, but he was too busy. So, they came to him in Manchester, Linda said. “He was happy to do it, and his kids absolutely loved that their daddy did this show.”

Every summer, she said, her son travels with his students to the jungles, which have, on occasion, been in Belize. “Now he goes to Tanzania each summer with his students for two weeks. They travel on a truck with armed guards through the Great Savannah and camp out every night. He loves it.”

Ed also takes his students to the Isle of Wight off the coast of England to study micro-crustaceans.

“He is very much into ecology,” she said. “He told me he is so into trying to save our earth. So am I.”

Ed dedicated his doctorate thesis to his grandfather, Wilson Harris, who was always involved in his life.

For its opening, he remembered his grandfather fondly.

“For Pop, who imparted to me his appreciation of the natural world, which I have never forgotten.”

Giving from the heart: Alpha Pizza House patrons reach out to mothers in need at Alpha House of Tampa