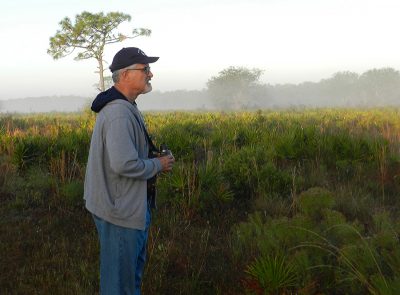 Dave Goodwin, seen here at Balm Scrub Preserve during a past Audubon Christmas Bird Count, has been participating in this annual data collection day since 1971. Volunteers can still sign up to participate in this year’s count, which takes place on Sunday, Dec. 17.

They’re out before daylight, stalking rails and owls. Then, as the sun peaks over the horizon, it’s the golden hour during which these volunteer birders will locate and document the whereabouts of thousands of birds throughout southern Hillsborough County.

On Sunday, Dec. 17, Audubon Florida and any volunteer with a love for birds who wishes to join them, will spread out over a 15-mile radius – nearly 170 square miles – to participate in the Audubon Christmas Bird Count, an important data-gathering ritual that has been going on annually across the country since 1900.

There never seem to be enough volunteers to cover such a huge area, said Charlie Fisher, who tabulates the data collected in Tampa and in the area called the Alafia Banks. So, there’s still time to get in on the action.

Anyone who wishes to participate can call Fisher at 813-495-7734 to get an assigned location.

The Christmas Bird Count takes place across North America and South America between Dec. 14 and Jan. 5, 2018. Volunteers in each 15-mile circle have 24 hours on a set day to count birds in their allotted area.

The Christmas Count, because it has been going on since 1900, is one of the most important time series data sets in American ornithology. It shows winter populations of birds, information professional ornithologists across the globe can use to determine population fluctuations and other changes in the environment.

This will be the 21st year volunteers have spread out from the center of the circle at Big Bend Road and U.S. 301 to count its feathered inhabitants.

“They just need an interest to participate,” Fisher said. “You don’t have to be a bird expert. There will be a variety of levels of expertise. We have everything from intensive birders who are out there from ‘o-darkthirty’ to sundown, and some want to watch their feeder or the retention pond that is in their neighborhood and give me a list of birds they find in their backyard.

“A typical day for me, when I’m leading my sector, is to get started around 5 a.m. for nocturnal birding. The birds you see at that time of day are mostly owls and rails.

“Once the sun starts creeping up, that’s when you really need to get your land birds. That is when they are most active. They’re waking up, they start calling and moving around and feeding. That first hour is the most precious hour of the day. You have to be there at the right time. If you can get out while it’s still dark… that’s fantastic. And you’ve got to be there for that golden hour.” 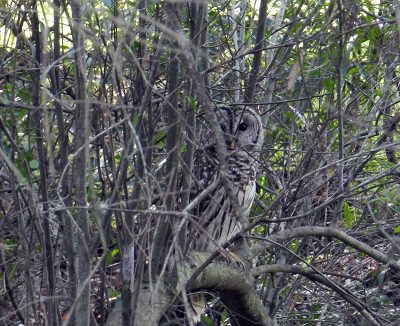 Photos COURTESY OF DAVE GOODWIN
A barred owl is seen early one morning near Balm, a section of the Alafia Banks, during the annual Audubon Christmas Bird Count. Volunteers can still sign up to participate in this year’s count, which takes place in southern Hillsborough County Sunday, Dec. 17.

Without question, Fisher said, the most productive time for counting is from sunrise to 9:30 a.m. By then, volunteers will have seen 85 percent of the species they will spot all day.

“They get much harder to detect after that. Some birds are relatively impervious to the dawn-dusk cycle. The shore birds’ days are driven by the tides. If you are lucky, the best tide is at 2 in the afternoon, so volunteers are able to spread out the really busy counting times.”

Dave Goodwin has been participating in the Christmas Count since 1971 and started working in the Alafia Banks circle in 2003.

“To go out and see how many different species you can get in the day, it’s a challenge,” Goodwin said. “I’ve done so many counts and have found ‘firsts’, bird species never before counted in a given circle.”

Goodwin counted the first reddish egret in the Tampa circle back in the early 1970s, a species that was very rare here, but is thriving in Tampa Bay these days.

“They were not common back then. They were pretty much restricted to Florida Bay in the Everglades,” he said. And every volunteer who finds a ‘first’ gets a thrill, he said. For someone to get assigned to an area they’ve never been to bird watch, that also makes the count special,” he said.

Mark Rachal, sanctuary manager for the Coastal Island Sanctuaries of Audubon Florida, will be out with volunteers on Tampa Bay counting birds out on the open water and along the shoreline.

“We are looking at ducks on the water,” he said. “There are thousands of lesser scaup in the bay already. We’ll go on (Port Tampa Bay) property. They have a lot of wintering birds, especially oyster catchers. We launch from Davis Islands Boat Ramp. We count downtown Tampa and up the Hillsborough River.

“We also go down to Apollo Beach and Fish Hook spoil island. We take out other volunteers for that day, too,” Rachal said. “We’re on the Alafia in the morning and we team up with Mosaic (phosphate company) and survey their property at the Riverview facility. There are some freshwater ponds they use for (water) recycling. Birds and ducks use them. There is also upland habitat we survey.

“For the Alafia count in the afternoon, we go out and do the water portion, which includes the Alafia bank and the large spoil island to the south called 3D, the port island.”

All volunteers are welcome to join the count.

“My job as the (data) compiler is to assign out those volunteers and make sure they have a good day and are productive and learn about birds,” Fisher said.

For those who wish to spread their wings outside of southern Hillsborough County, go to the www.audubon.org/conservation/science/christmas-bird-count and click on Join the Christmas Bird Count.