‘With the Grace of God,’ and your help… Annual Riverview senior dinner brings holiday joy for 21st year 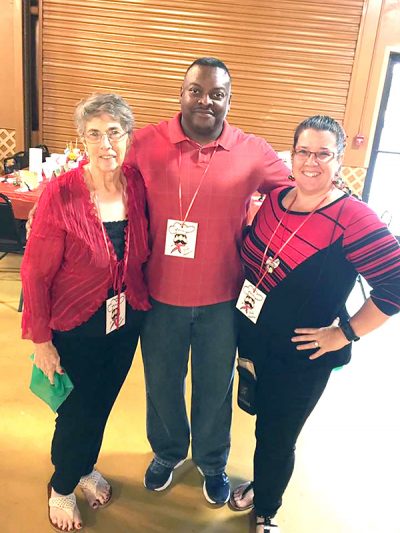 For the 21st year, the community of Riverview will come together for its seniors and needy to host the Hillsborough County Senior Citizens Christmas Party on Dec. 14 this year at the Showman’s Club.

“We developed a senior Christmas party as a way to get them together,” said event founder Barbara Jones, a retired community service officer for the Hillsborough County Sheriff’s Office.” It started out as a need-based party, but it can be financial need, or they are alone. You can be as rich as Warren Buffett and still be lonely. How depressing it is to have no one. And then there are caregivers. Oh my gosh, just a night out for them, they are catered to and they are taken care of.

“When I started working for the sheriff’s office years ago, part of my goal was to develop community programs and work with community programs,” Jones said. “There was a big need at Christmas. Everybody else went to kids.” There was a true need to reach out to seniors, she said.

Now that Jones has retired, Riverview businesswoman Theresa Turner has created the nonprofit Riverview Our Town to help defray some of the costs. Still, it is mostly an event in which the community comes together, Turner said.

Volunteers are still needed to set up, serve and break down the party. And numerous gift donations are still needed for gift bags each participant will receive. “I tell teachers and others in offices who get gifts they won’t use that we also accept their regifting,” Jones said.

Last year 650 people turned out. This year, the list is limited to 400 invited guests whose names were submitted by sheriff’s deputies, neighbors and other community members who believe they could use a lift and that this party would be just that for the holidays.

The menu this year includes pulled turkey sandwiches, baked beans, coleslaw and potato salad. There will be live music and volunteers decorating, serving, cooking and cleaning up.

“This is no longer about who can afford it,” Turner said. “It is about people who need to get out. For a lot of them, this will be their only holiday event.”

Guests will include patients from local memory care facilities — those with Alzheimer’s disease. While they may not be able to remember much, they tend to remember the Christmas party, Jones said.

“We set up a table specifically for them,” Turner said. “We also get homeless veterans who each leave with a backpack full of donated items they can use on the road, like deodorant, toothpaste and other toiletries.

“We do have some sponsors, but we like to get members of the community to drop off donations,” Turner said. “It connects them with the event. We also provide baskets in the community, so we need donated turkeys to fill out the baskets from which they can make a meal.” 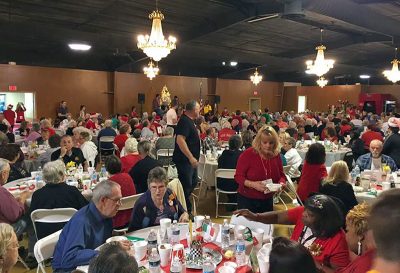 The coordinators say they must trust their gut on who gets an invitation. “We have a large area of Riverview that doesn’t even get Meals on Wheels,” Turner said, “so our goal is to get to people who really need it.”

So far, Target and Chick-fil-A, both regular donors, have kicked in and a local barbecue company is loaning grills and helping to cook.

“We need at least 50 volunteers,” Turner said. “We need people to set up, decorate, clean up. We need servers getting the food on the tables, people to bus tables and people to refill tea and coffee and people in the kitchen preparing the plates.”

Community activist Heather Michael said the Riverview Woman’s Club heeded Jones’ call. “The Woman’s Club is going to provide support for the dinner by volunteering, asking for donations and providing support for Barbara. She came and spoke about the event at our meeting and it was so moving!”

“It has always been 100 percent a community event,” Jones said. “The community has been there. We have some of the same people volunteer and donate every year.

Next year, she said, she would like people to volunteer to sit on a committee to help plan the next party. “I would hate to see this go away,” Jones said.

Chamber View: Let us be thankful — and prepared