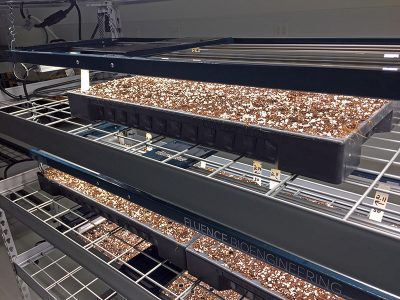 An old tomato packing plant on U.S. 41 North is transforming in to a hydroponic medical marijuana farm that will cater to patients across the state.

AltMed, in partnership with Plants of Ruskin, sowed the first seeds last week in the unassuming green metal warehouse and plans to have the plants processed and in various forms ready to sell within four months.

Once Phase 1 is in full operation, the farm is expected to produce 350 pounds per week of high-grade medical marijuana.

“We have already rehabbed 10,000 square feet of the old packing plant,” said AltMed Florida CEO John Tipton. “By rehabbing, I mean we’ve taken everything down to the metal trusses and put in all new tin and insulation in the facility so there is no risk of pests or mold. We are starting with a clean slate.”

Each vast white room in the secured warehouse has interesting names like the Mother Room, the Clone Room and the Flower Room where plants at various stages of growth will be placed. Each room is filled with long metal grow tables with a special watering system and high-tech lighting overhead to grow the plants in a controlled environment.

This medical marijuana farm has been years in the making, Tipton said.

The company has hired Phillip Hague as its cannabis expert. He previously worked in Colorado after medical marijuana, then recreational marijuana became legal there.

“Those seeds will break the surface over the next few days,” Hague said, standing near the seed trays topped with LED lighting. “They’ll be ready to harvest in four months.” Well-known strains of marijuana including O.G. Cush, the Chem Dog family and Sour Diesel are among the varieties the company will grow. The advantage of using seeds is to find out which strains will produce the best in Florida, Hague said. Once established, the farm will clone new plants. 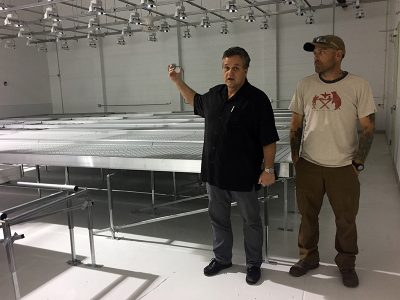 “We will do the processing, also,” Tipton said. “Under Florida law the license owner has to grow, process and distribute it. We’ll have six dispensaries in Florida. We’ll have one on the property, and it will be ready to open as soon as we have product to sell.” The company is also actively working on permitting for a dispensary in Sarasota and is looking for sites in St. Petersburg, Tampa and Miami.

The first harvest is expected to produce about 200 pounds of pot. It will be sold as the MuV product line, as it has been in Arizona for about 18 months.

Mike Smullen, CEO of Alt Med Enterprises, who has a background in the pharmaceutical and biotech industries, said the company started in Sarasota in 2014 and immediately began hiring experts.

“We decided early on not to apply for one of the early Charlotte’s Web licenses (for low-THC marijuana used for patients who have seizures). Instead, we sent our people to Arizona to build a vertically integrated business, growing to processing to manufacturing to dispensing. We set out to do that and have been out there for about a year and a-half and have built a very successful business.”

Plants of Ruskin was one of the companies that decided to go ahead and apply for a license in Florida. “They’ve been in business over 30 years. Their primary business has been on the growing side. We had the same vision they had. We had our own nursery in Sarasota, but decided to partner with Plants of Ruskin, since the two companies shared a vision,” Smullen said.

“We’ve had a vision from the very beginning to build a very serious medical cannabis company applying the highest standards possible for everything we do,” he said.

“Plants of Ruskin was building out an indoor facility that was very much in line with what we were planning to build out. A lot of the growers in Florida are doing their business in greenhouses, and I think we feel more confident with what we are doing.

“There is a medium that you use, but we are not planting in the ground,” Smullen said. “Hydroponic refers to an automatic watering system. And there is a special lighting system. You trick the plants in to believing that there is day and night.”

Once Phase 1 is in full production, AltMed will have about 30 employees and another 50 to 60 in the dispensaries.

Chamber View: Let us be thankful — and prepared