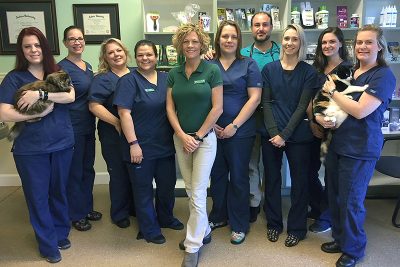 Much to the delight of its two-legged clients and four-legged friends, Four Paws Veterinary Hospital recently observed its 10th successful year of operation.

Dr. Kim Tyson, its owner, is known throughout the community for her practice of integrative veterinary medicine, which includes both holistic and traditional forms of treatment, and her tireless fundraising efforts on behalf of area nonprofit groups supporting animals.

“She is entirely focused on the quality of life of the animals she sees and the relationship she extends to her clients,” said Tanya Doran, one of those clients and executive director of the Greater Riverview Chamber of Commerce. “What sets Dr. Kim apart are so many personal touches. She goes well beyond all expectations.”

Tyson opened Four Paws Veterinary Hospital with two employees Nov. 7, 2007. One of them, Kristina Farfante, stayed with her and now manages the hospital. Eight other employees and two veterinarians have since joined the practice.

After so many years, Tyson still enjoys working with animals and their humans.

“I always see something new, so it remains challenging,” she said. “I love to help animals achieve and maintain health and improve the bond between them and their ‘parents.’

“This is what I love doing,” the vet added. “I wouldn’t be anything else.”

When she was younger, Tyson wanted to be a physician, specifically a pediatrician. But her grandmother Mercedes Hernandez, a chemistry teacher at Brandon High School, encouraged her to become a veterinarian instead because of her deep love for animals.

She worked for four years in Gainesville at Millhopper Veterinary Medical Center and Lake Area Animal Hospital, and then returned to Santa Cruz Animal Clinic in Brandon, where she had been a vet tech in high school. She stayed for five years, and then did relief work for several area veterinarians before starting a family and her own practice. She and her husband, David, have twin daughters, Bree and Katie, now 13. 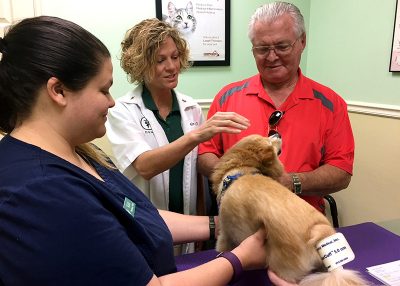 Dr. Kim Tyson stops in to chat with pet owner Craig Vandiver and his Pomeranian mix Player, as a vet tech checks the dog’s blood pressure.

Months before opening Four Paws Veterinary Hospital, Tyson earned certification as a veterinary acupuncturist from the Chi Institute in Reddick.

Dr. Jonathan Rubenstein, who is residency-trained in the care of birds, reptiles and small mammals, treats exotic animals, including birds, rodents, reptiles and rabbits.

“Animals age so much faster than we do,” Tyson said. “That’s why it’s important to check them on a regular basis for potential issues that become more common as they age.”

And on days when two doctors are at the clinic, Tyson will schedule house calls for owners and pets with special needs.

“Dr. Tyson and her entire staff are amazing,” she said. “Using acupuncture and laser therapy, she treated my Great Dane Herbie for severe arthritis and (by doing so) gave us the gift of time.”

Kohn said she would have had to put the dog down years earlier without Tyson’s total commitment to its health and happiness. Herbie finally passed away last April.

“I can’t thank her enough for what she did for my family,” Kohn said. “I couldn’t imagine a better vet. She’s personally and professionally fantastic.”

On Small Business Saturday, a passing of the shears