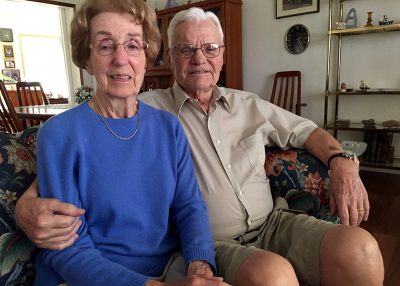 According to United States Census Bureau statistics, more than 20 percent of Sun City Center residents are veterans. Yet throughout the community’s 56-year history, there’s never been a monument to honor them.

That is about to change.

Thanks to sponsorship by the Sun City Center Charitable Foundation and its president, Walt Cawein, a group of community leaders called the SCC Veterans Memorial Committee has begun raising funds to build a memorial honoring those who served or are serving in the United States military and to promote civic pride.

“This town should have a veterans memorial,” said Sun City Center resident Dallas Tuthill, 89. “It will be good for the town and meaningful to the veterans who live here.”

The retired U.S. Army Colonel and his wife, Norma, have a history of charitable giving, mostly in small gifts here and there to groups like the Red Cross, Salvation Army and Foundation for Economic Education. But because the Sun City Center Veterans Memorial is so important to them and the community, the couple have pledged $40,000 as seed money to the foundation.

“This is by far our largest donation so far,” Tuthill said.

Cawein said the budget for the memorial is $100,000, and additional expenses will be required for its upkeep, so community support is essential.

The actual structure will be built brick by brick, and the goal is to raise enough funds to cover the cost of construction. That will be accomplished through tax-deductible donations to the SCC Charitable Foundation and the sale of engraved, commemorative bricks.

Checks earmarked for the memorial and made payable to the SCC Charitable Foundation should be mailed to P.O. Box 6105, Sun City Center, FL 33571. Donations can also be made online at www.charitablefoundationscc.org by clicking on “Become a Donor.”

Sponsorships are also available at the following levels: 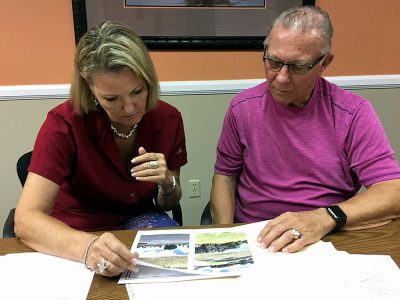 LOIS KINDLE PHOTO
Sun City Center Veterans Memorial Committee members Dana Schroeder, of American Legion Auxiliary Unit 246, and Walt Cawein, president of the Sun City Center Charitable Foundation, review some of the project details for a proposed memorial to be built in the community by Veterans Day next year.

To purchase a brick, visit www.charitablefoundationscc.org, scroll to the center of the home page, click on “Purchase an Engraved Brick” and proceed as directed.

All are made by Whitaker Greer of high-quality red clay and are more dense and durable than typical clay bricks. They come in two sizes, 4 inches by 8 inches and 8 inches by 8 inches, and vary in price from $100 to $215, depending on size and engraving.

Printed order forms will be available at the Sun City Center Area Chamber of Commerce, 1651 Sun City Plaza, and Cawein is willing to mail a copy to those who cannot stop by.

“I think every community, especially a retirement community, should have some kind of monument or memorial commemorating veterans,” said retired U.S. Army Col. Paul Wheat, a member of the Sun City Center Charitable Foundation board. “This is the first time we’ve had an organization in Sun City Center willing to take the lead in organizing, planning and fundraising to make it happen here.”

The Sun City Center Veterans Memorial will be located in the landscaped area directly in front of Community Hall, 1910 Pebble Beach Blvd. S.

“I can’t wait to get construction started,” Cawein said. “We hope to have it finished by Veterans Day next year.

For printed copies of the order form or more information, email walt.cawein@gmail.com.