With retirement, longtime Manatee librarian leaves a legacy of knowledge and a history of success 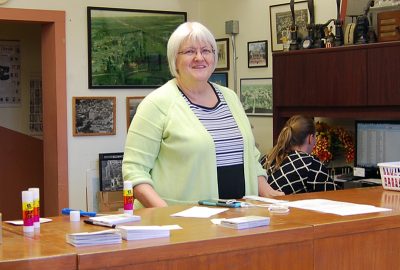 CARL MARIO NUDI PHOTO
For the past 15 years, records librarian Cindy Russell, who will be retiring Nov. 30, would greet visitors to the Manatee County Historical Records Library from behind the work counter.

Even before Manatee County was founded in 1855, clerks generated a lot of records, and for the past 15 years, Cindy Russell has been indexing and keeping track of most of those archives.

But on Nov. 30, Russell will be retiring and leaving her job as the records librarian at the Manatee County Historical Records Library, 1405 Fourth Ave. W., Bradenton.

“We are going to lose a lot of knowledge,” said Cathy Slusser, chief historian of the Historical Resources Division of the Manatee County Clerk of Circuit Court and Comptroller office.

“Cindy has read all the newspapers from about 1890 to 1920. No one knows more about that time period in our history than she does, except maybe the people who lived it.”

Russell’s extensive experience in genealogical research was very instrumental in her being hired.

She was a member of the Manatee Genealogical Society and did a lot of research at the historical library.

Russell got to know the previous librarian, Stephaney Mashburn, very well because of her frequent visits to the records library.

“I told her if she ever left to let me know,” Russell said. “She did, and I applied.”

She got into genealogy in 1977, although she did do a family history report while in high school.

“My grandmother was still alive then and knew the family history back five generations,” Russell said. “I wasn’t working when we first moved down (to Bradenton from upstate New York) and needed something to do, so I got interested in genealogy.”

She joined the Manatee Genealogy Society in 1978.

“I made a lot of friends there and met people with the same interests,” Russell said.

She has continued to research her family and has gone as far back as 1640, when her first ancestor came to the United States.

The last family member to immigrate to the U.S. was her grandfather in 1925. 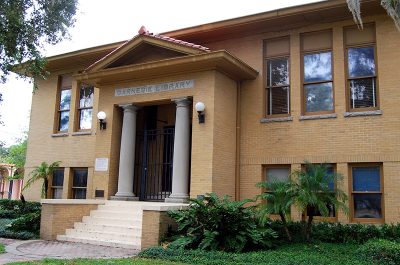 Russell and her husband, Donald, owned a gas station in Newark Valley, N.Y., northwest of Binghamton, during the 1974 gas crises.

“When we pumped out (ran out of gasoline to sell) we came down for two weeks to visit family,” she said. “Donald had five aunts living here.

“On the way back we ran in to snow in Spartanburg, S.C.,” Russell said. “We sold our station and moved to Bradenton.”

The county archives span from 1842, when Manatee County was part of Hillsborough County, until 1978, when the records were put on microfilm and eventually stored online.

“Keeping historical records gives us a foundation for teaching about the past,” said chief historian Slusser. “Residents and visitors of all ages who learn about a community’s history are more inclined to feel a part of that community, leading to respect for the community including less vandalism and graffiti, and more community involvement.”

It also has an extensive collection of county newspapers, postcards and other artifacts.

Russell has indexed much of the county records, making it easier to find information.

She also has done several other projects during her 15 years as librarian.

Russell created a list of the original landowners of Manatee County; finished indexing a Bradenton and Sarasota hotel list; created a subject index of the Manatee River Journal, one of the first county newspapers; created a marriage license index; indexed the postcard collection; and cataloged all the land in Manatee Village.

Her current project is a file of newspaper ads.

“People come in and say, ‘I ate at this place, but don’t remember where it was,’” she said. “So I’m going through the paper and indexing restaurants that advertised in the newspapers.

“I find it very interesting,” Russell said. “I wanted to finish this before I left, but don’t think I will.”

Slusser said about 600 people a year utilize the historical records library, about half by phone or email.

“Having historical records gives us a window into the past and the struggles that people went through to make our community what it is today,” she said. “It also helps us, if we pay attention, to avoid repeating the mistakes of the past.”

Russell said people try to figure out their personal life through public records.

“For instance, one gentleman needed court records for his concealed handgun permit and found he had a felony count for stealing a hog when he was 18 years old,” she said. 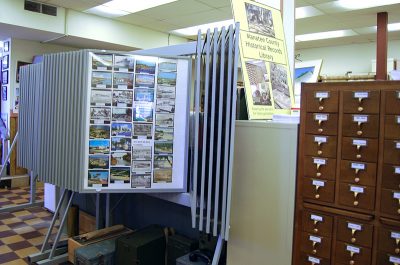 Cindy Russell, who will retire Nov. 30 after 15 years as librarian, has indexed the extensive postcard collection on display at the Manatee County Historical Records Library.

All types of people use the library services, such as genealogists, lawyers, paralegals, surveyors, title companies and historians, Russell said.

“We have two primary types of customers,” Slusser said. “Those researching a piece of land for sale or for environmental purposes and those doing family history.

“We also get historians and students who are researching for a history project,” she said.

“We do anything history related,” Russell said. “I like history, and the research comes easy.”

Russell said she has been interested in history since she was a little girl.

“It was nothing for us to go to the cemetery to read the tombstones,” she said. “And I had an excellent history teacher, Isabella Patch.

“It takes a great history teacher to spark an interest in history,” Russell said.

She said she was proud of the work done at the library.

“We’ve made it as a first-class library,” Russell said. “We also collaborate with the other historical sites in Manatee County.”

“Her head is filled with knowledge, and if she doesn’t know something she knows where to find it,” Ingram said. “And she always does it with a smile.”

Russell and her husband of 49 years are moving to Colorado Springs, Colo., as soon as their house sells, to be closer to their daughter’s family.

They have one daughter, Christina, who is married to Keith Verney.

The Russells also have a grandson and a granddaughter.

Cindy Russell said she was not planning on working when she moves.

“I will probably join the local DAR (Daughters of the American Revolution) group.”

Replacing Russell in the position as librarian will be Krystin Miner.

Miner worked for the clerk’s office as the curator at the Florida Maritime Museum in Cortez and has a master’s degree in liberal arts with a history focus.

“Krystin has always wanted to work in archives, so this is her dream job,” Slusser said. “She has deep roots in our county as a descendant of the Gillett and Turner families.

“We are excited about having Krystin on our library team,” she said.

Miner will have some big shoes to fill, though.

“Cindy is a whirlwind,” Slusser said. “She is always busy, always looking for a new project.

“Sometimes, people come in and ask a question and she will respond that we can’t find the answer, then, the next time I turn around, she has done research and can answer it,” she said.

“It’s all about working with records,” Russell said. “I’ve enjoyed every minute of it because it’s different every day.

In honor of Russell’s special day, guests are asked to wear her favorite color, purple.

For more information about the Manatee County Historical Records Library visit the website at www.manateeclerk.com/historical/HistoricalLibrary.aspx