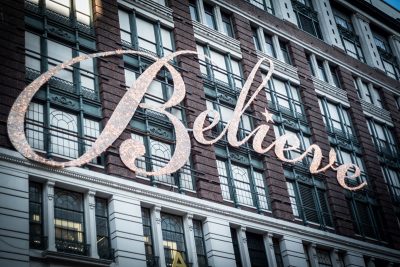 MITCH TRAPHAGEN FILE PHOTO
At the Macy’s store in Midtown Manhattan. In beginning the holiday season with a day of Thanksgiving, there is much left in which to believe.

I looked down 33rd Street and in huge lighted letters on the side of the building was the word, “Believe.”

Well, in this case, the word was in reference to a letter that a little girl named Virginia wrote to her local newspaper about Santa Claus. The newspaper editor responded with, “Yes, Virginia, there is a Santa Claus.”

That exchange occurred in 1897, and the editor’s response has become the most reprinted newspaper editorial in the English language.

And on that chilly, windy late November day in which I was on 33rd Street in Manhattan facing the Macy’s store, I was faced with the huge, lighted word “Believe” as part of the store’s Christmas decorated windows, complete with a newspaper headlined, “Yes, Virginia…”

But it meant more than that.

This past year has tested us in ways sometimes beyond our collective imagination. There have been hurricanes and wildfires. There have been the horrors of mass shootings, crimes of all sorts, and there have been political divisions to the point that some academics have wondered aloud if the United States of America is heading towards a second civil war.

But I don’t think so. Our so-called Information Age makes it so effortless for each of us to confirm our own suspicions and biases that it is easy to believe the world is on fire. Yes, there are some very bad people among us. People who kill and those who wish to destroy. But they are not us, not collectively, anyway. We are better than that. Today we are better than all of the news America and Americans have generated for the past 241 years. Tomorrow we’ll be better still. We’ve always been a nation that could be described as a dynamic, colorful “human stew” rather than a “melting pot.” This nation has long been well-served by using the best of our differences to our advantage. Yes, we’ve always had differences, and yet we’ve always succeeded, we’ve always persevered. I don’t see that changing now.

As we enter the holiday season, a time of Thanksgiving, of Hanukkah, of Christmas, with the faith of miracles long held — both by the pilgrims who (reportedly) first celebrated and today by those who still see America as the shining city on the hill, a miracle still in the making, my wish is for less anger, less isolation within paradigms, less vitriol and more of all of the opposite.

As Americans, we are and have always been free to have or lack religious faith; to believe in God, Allah, or even the Flying Spaghetti Monster. My faith is my own and it is as much a part of me as my own skin. My life would be diminished without my faith. Yet I can appreciate that even Thomas Jefferson owned and read the Quran, in addition to the Bible.

But I believe that as Americans it is incumbent upon us to have faith in America and our fellow Americans. I am certain the American Experiment is far from over. We have only just begun. But we must hold on to faith in ourselves and in each other.

As we enter the holidays, the season begins with a day of Thanksgiving. Most of us have a great deal for which to be thankful. Hopefully, in neighborhoods across South Hillsborough and across the nation, those who can are helping those who cannot, thus magnifying and personifying the very ideals of thanksgiving, along with all that is good and right about America itself.

We are a good people. This is a good and blessed nation. While I won’t comment on Santa Claus, I do know one thing is warranted for all of us, between all of us — it is something that we still share: