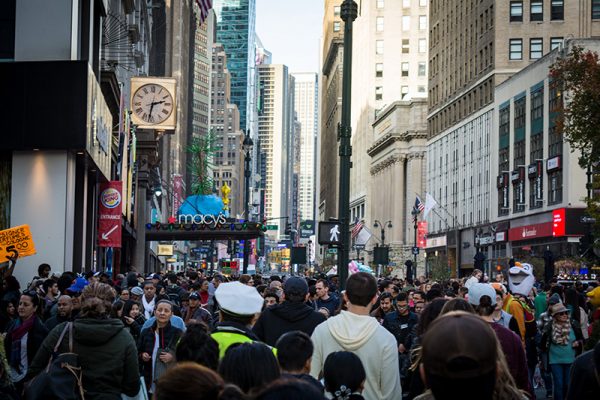 It seems as though the Halloween candy is barely gone and it’s already time for the holidays. Black Friday, the day after Thanksgiving and what was once thought of as the biggest shopping day of the year, has lost its prominence — or, rather, it has diminished as Black Friday sales began a week or more ago and have only ramped up this week.

So, despite that many stores will be open, Happy Thanksgiving. It is a day to enjoy family and friends and to give thanks, usually at home. But today it could also mean enjoying their company on a “pre-Black Friday” shopping excursion, as pictured above near the Macy’s flagship store on 34th Street in New York City.

The 2017 Macy’s Thanksgiving Day Parade kicks off at 9 a.m. on Thursday.