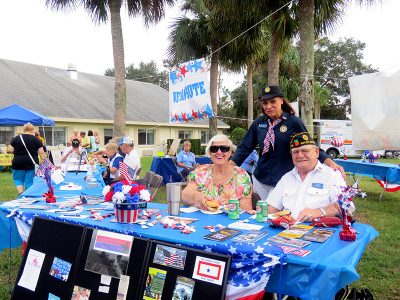 BILL HODGES PHOTOS
The American Legion was one of several area military groups who had displays in the Veterans Tribute Circle.

In the days surrounding the official Veterans Day date—November 11—most communities have special ceremonies, concerts, parades and other tributes. Many restaurants and stores offer  free meals and discounts.  DaVita Medical Group’s Tribute to Veterans BBQ Bash on Nov. 9 provided another community occasion to honor our military heroes.

“Many folks had been asking for a repeat performance of the original BBQ Bash we held four years ago,” said Rosie Korfant, DaVita’s activities coordinator. “We decided this was the year and chose the date to coincide with Veterans Day.” The lawn of Palm Garden Health and Rehabilitation Center was awash in red, white and blue at the free, open-to-the-public event that attracted about 800 people.

The day’s program began with presentation of the colors by the Lennard High School JROTC Battalion and the Pledge of Allegiance, led by retired U.S. Major Irving Fannel.  Then Ellen Kleinschmidt sang the national anthem a cappella.

A Veterans Tribute Circle was situated in the center of the festivities, with tables manned by representatives from several military organizations. A display was also included with information about the new Sun City Center Veterans Memorial being planned for the Community Association’s South Campus on Pebble Beach Boulevard S.

In her welcoming remarks, Korfant acknowledged the groups attending and her military advisors, retired USAF Lt. Col. Walter
Cawein, retired USMC Major James Haney, and Lt. Col. Paul Wheat for their help in coordinating the military groups’ participation. She also led the audience in singing “Happy Birthday” for Erleen “Molly” Worth, a U.S. Navy veteran, who would be celebrating her 96th birthday on Veterans Day and presented her with a cake.

The Front Porch Pickers entertained with patriotic selections combined with their own brand of foot-tapping music. Club President Dave Lickfeldt said that they were proud to be invited to participate since many of their members were veterans. 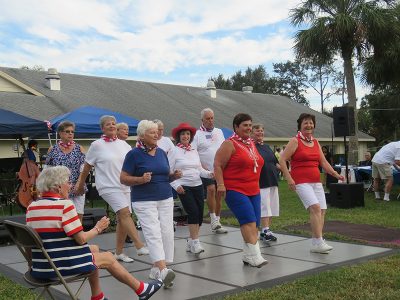 BILL HODGES PHOTO
A line dance demonstration was part of DaVita’s Tribute to Veterans. U.S. Navy veteran Molly Worth (sitting) participated and was recognized as celebrating her 96th birthday on Veterans Day.

Also on the program were line dancing and salsa demonstrations by dancers who meet at DaVita weekly for lessons taught by Darlene Meadows (line dancing) and Gus Adams (salsa). It was especially noteworthy that Worth found a way to continue enjoying her love of line dancing; she sits.

Classic cars of Roamin’ Oldies’ members were parked on the perimeter of the venue space and elicited lots of attention.  Bob Reynolds’ recently acquired 1955 Chevy Nomad was getting a lot of attention as it was a rare two-door station wagon. Reynolds, a Freedom Plaza resident, said the Nomad was produced only three years (’55 thru ’57) so there aren’t many around.

Joe Battle, director of James A. Haley VA Medical Center, spoke for all when he said, “To those who have faithfully served, and to those who serve today, we thank you.”  And thank you, DaVita, for giving residents an opportunity to gather as a community for this Tribute to Veterans. DaVita has three clinics in the Sun City Center/Ruskin area; physicians and staff members from all three were at the event.