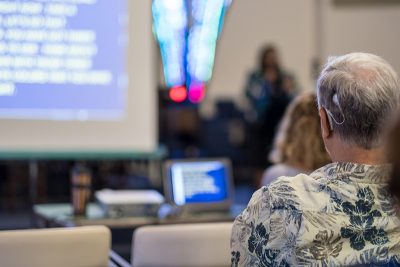 MITCH TRAPHAGEN PHOTO
A member of the Hearing Loss Association of America Sun City Center chapter both hears through a cochlear implant and follows along on the large screen for closed-captioning during the October 10th anniversary meeting.

A portion of the lyrics from the theme song of the 1980s television sitcom Cheers, tells the story:

Making your way in the world today can be difficult. The pace is faster than ever, the rate of change is staggering. Sometimes it’s nice to just stop for a moment and know that others have the same troubles and worries. And for some people, that place is at the monthly meetings of the Hearing Loss Association of America Sun City Center Chapter.

As for everyone knowing your name: if anyone doesn’t yet, the standard, “Hello, My Name Is…” stickers solve the problem.

No one knows how many people in Sun City Center and the surrounding communities suffer from hearing loss. It is estimated that 48 million Americans are so afflicted. By the age of 65, one out of three people suffer from some form of loss. Hearing loss is more than it seems: Once it becomes difficult to understand normal conversation, people often tend to withdraw from such things, leading to isolation, clinical depression and worse.

The Hearing Loss Association of America is dedicated to helping people avoid that unnecessary fate — there are tactics and strategies for those suffering from hearing loss. The first step, however, involves a visit to an audiologist for a full test. That first move is often prompted by a spouse or friends who notice that you may hear and understand less and less. 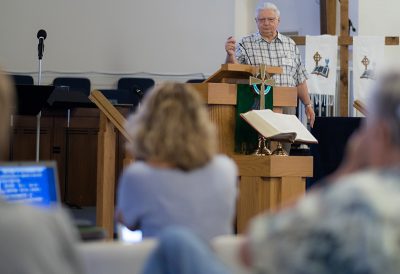 MITCH TRAPHAGEN PHOTO
Richard Herring is chapter president and one of three original founders of the HLAA Sun City Center Chapter when it began in 2007.

In Sun City Center, the HLAA’s mission is critical. Only a small percentage of those with hearing loss are diagnosed and treated for it. Attempting to communicate while hearing impaired requires a great deal of concentration and effort. But there are solutions; there are ways to make life easier.

Last month, the HLAA Sun City Center chapter, celebrated their 10th anniversary. Richard Herring is both president of the chapter and one of the three original founders from 2007. He has experienced first hand the successes and the trials of steering the chapter for the past decade. Herring is profoundly hearing impaired — and while the chapter is by no means an exclusive club, it also is a place where, more or less, people can relax and learn knowing the troubles are, for the most part, all the same.

The Sun City Center chapter has held more than 100 meetings in the past decade, more even than chapters in the large urban centers of Tampa and Sarasota. During the anniversary meeting on Oct. 17, one of the speakers remarked that in just 10 meetings, learning all that is shared, comprehension for the hearing impaired can be increased by 20 percent. The meetings are closed-captioned, thanks to the volunteer efforts of Tess Crowder, executive director of Communication Access, Inc. and with funding from the Men’s Club of Sun City Center. Both Crowder and the Men’s Club were formally recognized at the anniversary meeting last month.

In Sun City Center alone there are certainly thousands of people living with hearing loss, most of whom are suffering needlessly. When loss reaches a certain point, it seems easier to simply withdraw from life than to endure not hearing, or receiving the understanding that is needed from those not afflicted. As most with hearing loss know, you can only say, “Pardon me, could you repeat that?” so many times before the answer is, “Never mind.”

From lip reading to ways to properly introduce yourself, the HLAA meetings are geared towards active solutions. But in the end, it is also a place to go where everyone is enduring the same troubles. And to that end, Herring’s credo is something to which most people with any disability could relate:

My abilities are not defined by my lack of hearing. My willingness to learn and share knowledge, my  insatiable curiosity about the world around us, my compassion for others, my sense of humor, and my perseverance in the face of great difficulties are the attributes by which others should judge me. Those people who fixate on my lack of hearing rather than seeing all that I am and all that I have accomplished, have more of a disability than I will ever have. They deserve my condolences and my pity; they do not deserve my time or my effort.

For information about the Hearing Loss Association of America Sun City Center Chapter visit their website at www.hlaascc.com or email richard@hlaascc.com.