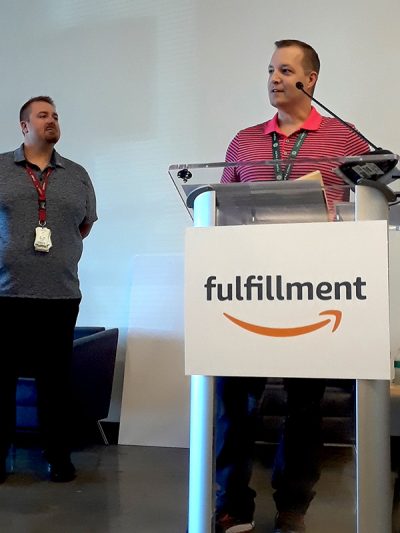 KEVIN BRADY PHOTOS
“The toughest day was going out on patrol and not returning with all my men,” said Stephen Greer, right, who spent a decade in the U.S. Army’s 82nd Airborne, an elite U.S. Army division, and the 25th Infantry division, serving tours in Iraq and Afghanistan. Rob Packett, left, is also a veteran. Both are senior managers at Amazon’s Ruskin facility, which counts more than 200 veterans among its 3,500 workforce.

Jumping out of a plane hundreds of times and dodging bullets and bombs while serving multiple tours during some of the bloodiest days of the Iraq War might not do much to prepare you for life in high-volume retail, you might think.

You would be wrong according to Stephen Greer, senior operation manager at Amazon’s distribution center in Ruskin, who served five tours in Iraq during a decade of service in the 82nd Airborne and 25th Infantry divisions.

“My military experience developed me as a brother, son, husband and now as an Amazon leader,” said Greer last week at an event honoring veterans at Amazon’s Ruskin headquarters. The 1.1-million-square-foot facility, which will ship millions of items this holiday season, employs 3,500 people, more than 200 of those veterans. “I had 120 (soldiers) who looked at me for direction and purpose every day, and I bring that same intensity here when I look you all in the eyes. Being shot at and dodging mortars teaches you a lot about who you are and your team … who you are, how you critically think, how you determine your next action and execute it in a timely manner,” Greer said.

“We do the same thing at Amazon. Our equipment probably breaks more than we would like, but instead of blaming someone for it, we team together, we determine a plan and we execute.”

“Today is all about giving back,” said Robert Packett, general manager of the Ruskin facility and an eight-year U.S. Air Force veteran. “One of the things that makes our country unique is that we have a 100 percent voluntary force. (Military service) is a selfless act so it’s important to recognize anyone who and (does that),” said Packett, as he handed out $5,500 in donations to veterans support groups.

The $5,000 donation to Tampa Crossroads will help homeless veterans get back on their feet.

“There are a range of reasons why people become homeless. They lost their job and don’t have enough saved up, substance abuse, mental health … there’s a wide gamut of reasons,” said Andrea Taylor-Machin, program manager at Tampa Crossroads, a Hillsborough County support group for veterans which serves some 400 vets a year.

The donation will help the group’s Supportive Services for Veterans and Families program, which helps veterans and their families who are homeless or in danger of becoming homeless. Amazon’s cash will also support The Athena House, a pioneering 12-bed facility for female vets that was the first of its kind in the U.S., said Taylor-Machin.

Tubbs was inspired to start her organization after attending a Veterans Day assembly at her Pinellas County school in 2015. Aged 9, she founded Operation Military Matters, which has sent 175 care packages overseas in two years. 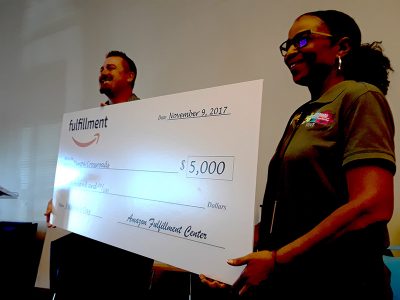 “There’s an extreme need for help (for veteran services),” said Andrea Taylor-Machin, program manager at Tampa Crossroads, a Tampa group that helps homeless veterans. “We work with veterans (with families) who are homeless so we need to provide assistance to them quickly,” said Taylor-Machin, pictured accepting a $5,000 check from Rob Packett, general manager of Amazon’s Ruskin distribution center.

“After seeing that they were fighting for us it just hit me that I wanted to do something for them,” said Tubbs who has several veterans in her family but none on active duty.

The packages are much appreciated by soldiers in the field said Packet, a U.S. Air Force vet. “I can say from experience that one of those packages can change your day,” Packett said.