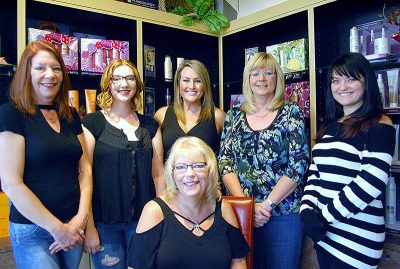 It isn’t every day that a small business reaches its quarter-of-a-century anniversary. And it’s even more remarkable when that business has been in the same location all those years.

When Vickie Carver opened a salon called Hair Carvers in the early ’90s, most of the businesses now in Apollo Beach didn’t exist. The Middleton, N. Y. native had moved to the area only three years earlier, working briefly at a salon in Sun City Center, and then for two years at a salon in Apollo Beach called After Images, which was moved by its owner to another location in 1992.

Out of a job and recovering from a recent automobile accident, Carver took the plunge and opened Hair Carvers in the same spot After Images had occupied. She began with one employee and three work stations. Within three years, the salon had doubled in both size and employees.

Then, in 2006, Hair Carvers became affiliated with Redken, a move Carver said revolutionized her business and took it to an entirely new level. She was sent to The Salon Professional Academy in Tampa to learn how to work more efficiently, build all aspects of her business and make it more professional.

The following year she gave her salon a complete makeover and changed its name to the more upscale Victoria’s 5th Avenue Salon.

“Since Redken is located on Fifth Avenue in New York, it seemed like a perfect fit for me simply to add my first name,” Carver said.

The renovation and name change took her salon from a mom-and-pop shop to a classier, customer-focused salon, she said.

“We’re known for our excellent customer service and high-quality, professional hair products and services,” she said.

“I have naturally curly hair and Vickie is able to style it so it always looks awesome,” said Judy Hasch, of Ruskin, a customer for the past 18 years. “She’s reliable, on time and always upbeat. I wouldn’t even consider going anywhere else.”

Like other small businesses, the salon struggled its way through the Great Recession, but Carver made sure it survived by taking out a personal line of credit.

“We’re the oldest salon in the area and we’re thriving, thanks to God, so many loyal customers, a supportive community and my great staff,” she said. “I’m so blessed.” 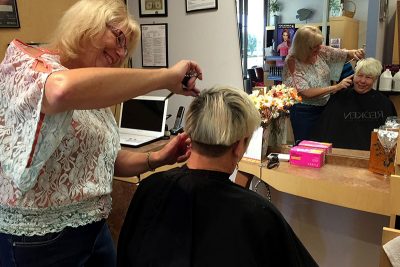 Tawney has come a long way from her vocational training at Minisink Valley High School in Slate Hill, N. Y. After passing the state boards and earning a cosmetology license, her first job as a shampoo girl and manicurist paid $80 per week.

Today she’s at the top of her game as a Level IV stylist and small business owner who just celebrated 25 years in business.

Victoria’s 5th Avenue is a full-service Redken Elite salon, offering all types of cuts and styling for men and women, perms, color (including the newest techniques), manicures and pedicures.

In addition to Carver, the salon’s stylists include her daughter Bree Carver, Diana Gayer, Monica Hylton, Kimber Yates and Kate Walker. There is currently room for four more.

Lyn Tyler is the shop’s receptionist.

“I’m the only salon in town open on Monday,” Carver said.

After two-and-a-half decades of doing hair, the owner still enjoys her work.

“I like being able to be creative and the challenge of making someone happy with the end result,” Carver said. “I never tire of that.”