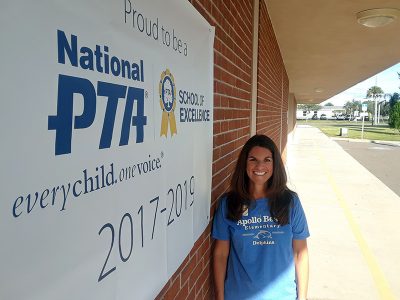 KEVIN BRADY PHOTO
Caren Katz will have a child in elementary, middle and high school next August and while she voted for a different option in the online poll, “regardless, education is a priority for my family, and we will make it work,” said the president of the Apollo Beach Elementary PTA.

That’s how my son, Patrick, and likely thousands of other local teens, view new schedules that will see high schools begin at 8:30 a.m. starting next August, an hour later. Up until midnight watching The Late Show with Stephen Colbert or a blood-soaked zombie movie, all while dad sleeps. Sweet indeed.

And the Hillsborough County School Board, which voted unanimously last Tuesday, Oct. 17, to change bell schedules for all public schools, is hoping local students do just that; dream more.

“I think finally society is starting to wake up to how important sleep is to children,” said Sally Harris, who represents the majority of South County on the school board including Riverview, Ruskin, Apollo Beach and Gibsonton.

“I’ve wanted this change since I was a PTA president at Coleman Middle School 20 years ago,” said Harris, a foster mom to more than 40 children over the last four decades. “I think (school bell schedules) were created at a time when we needed teens to help in the fields, but we just never changed it with the way the world changed.”

Changing elementary school bell schedules has proven the most contentious of the changes. In an effort to mollify parents, schools will offer before- and after-school care at a low cost at all elementary and middle schools based on need.

“A 20-minute adjustment really isn’t too drastic,” said Carmine Alfano, principal of Summerfield Elementary in Riverview which serves 783 local students. “The only feedback I’ve received from my parents is concern about daycare, which is always an issue with elementary school students.  It might mean we get more kids involved in our HOST program. Before and after school care is going to be the key.” HOST is a before- and after-school program offered by many elementary and middle schools.

Starting school 20 minutes earlier will help elementary students who tend to get up early anyway, teachers have told Caren Katz, president of the Apollo Beach Elementary PTA. It’s not a view shared by all parents. “Even though it’s only 20 minutes earlier I guess that 20 minutes is valuable to the parents in the morning. You would be amazed, but I’ve been at school at 8 a.m. when our bell rings and there are many parents still bringing their kids to school.”

While she makes sure her children arrive early, Katz is concerned more students will be tardy under the new schedule. “I don’t want it to be disruptive to everyone else when those kids are rolling in late. Other parents are very in favor of the new schedule because it will help them get to work.”

“We can look at all the research in the world … but somebody is going to be upset, said Harris. “We did not take this decision lightly.” 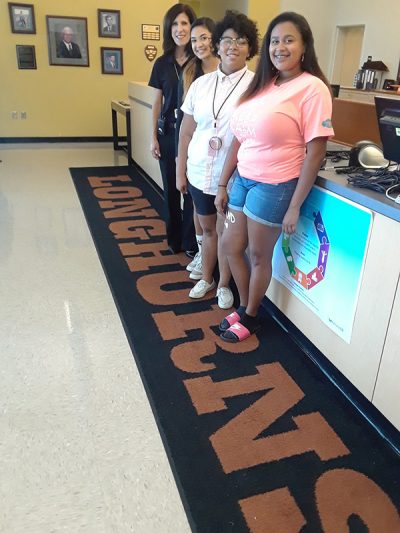 Sylvia Markland, end right, said all the students in her first period class are tired. The new schedule will “make it easier for us to learn and when it comes exam time we will have better test scores.” Also pictured, from left, Lennard principal Denise Savino, and juniors Taylor Land and Olivia Speed.

More than 12,000 county students are late for school every day because their buses cannot complete routes between schools on time, according to adminstrators who proposed a new bell schedule as a way to resolve the problem. Staggering start times would allow bus drivers time to transport almost 90,000 students on time and save money, officials said.

In April, the idea was put to the seven-member school board who decided they needed input from students, faculty and especially parents before making a decision. Almost 57,000 students, parents and faculty filled out an online poll between August and October, 30 percent picking Option A, one of six on the survey. The next most popular option drew only 18 percent.

High school students and administors seem to be embracing the change most enthusiastically.

Taylor Land, a junior at Lennard High, is looking forward to the new schedule in her senior year.

“I think the new bell schedule will be good because it will give students more time to get ready (in the morning),” said the cheerleader who anticipates pratice ending a little later next year.

“(The new schedule)will give us time to sleep and actually be prepared for school and be ready to learn,” said Olivia Speed, also a Lennard junior.

About 90 percent of high school students get insufficient sleep on school nights, eight to 10 hours, according to a University of Rochester report released Oct. 3. The same report said teens who start school before 8:30 a.m. may be at high risk for mental health issues. Use of cell phones and tablets at night are most to blame, according to reseachers.

“I’ve heard nothing negative at all (about the new schedule),” said Denise Savino, principal of Lennard High. “The (school) district informed us every step of the way so the way it rolled out no one was surprised.”

Diane Shotwell, principal of Riverview High, said there will always be pros and cons with any schedule. “Whatever the schedule is we will make it work.”

“I heard mixed response from parents,” said Stephen Szwerluga, president of the Rivervierw High PTA who has three children at the school, all seniors. “Some parents are happy because some of the students have a hard time waking up in the morning. On the negative side, it seems like it will be a longer day for some students because they work after school so they will have to hurry up and get ready for work.”

Riverview students, who have followed the issue closely Szwerluga said, feel it’s a “pretty good exchange. They get to go to school an hour later and only have to stay 25 minutes later.”

“We have had a handful of calls this week since the bell schedule was approved by the school board,” said Tanya Arja, a district spokesperson who reported calls in support and against the new plan.

For more information about the schedule visit www.sdhc.k12.fl.us/. The site includes an extensive question and answer section for parents.