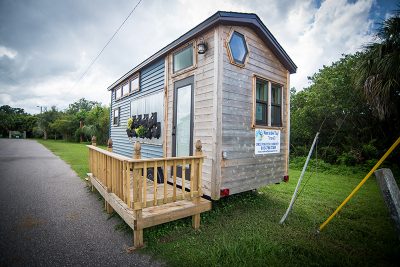 MITCH TRAPHAGEN PHOTOS
Caneen’s tiny home, which is slated to serve as an office once Circle Pond Tiny Community opens, is currently on display at the Firehouse Cultural Center in Ruskin.

There is no incongruity in saying that tiny homes are big these days. They have their own television shows. Increasingly, particularly for younger adults, it seems the 3,000-square-foot home in the suburbs is more of an anchor than a dream. And an unattainable anchor at that.

Some people are learning that there is more to life than stuff. They are discovering for themselves that they can have more simply by owning less. Tiny homes require a focus on things important. They eschew things not needed in life. Happiness may certainly be found in knowing you can nearly wrap your arms around that which is important, that which you own and love.

Debbie Caneen has a dream and it involves walking away from a 2,000-square-foot house and all of the associated stuff such a large dwelling can hold. Caneen purchased a tiny home from Stephanie Henschen, a USF student who built it, along with her father, as a thesis project for her architecture degree. What inspired the purchase was simple serendipity: a local realtor with whom she serves on a community board told her of a dilapidated mobile home park for sale. An idea flashed and Caneen put cash down upon her dream. The result? The future Circle Pond Tiny Home Community.

Caneen, the director of admissions at Sun Towers in Sun City Center, is a community-minded force of energy and optimism. She is transforming both a problem at work and her own misgivings about everything from food to too-much-stuff into a solution that is needed more with each passing day.

“From working at Sun Towers, it is really hard to find people to work in the building and who can afford to live nearby,” Caneen said. “But my seniors need people, young people, to support them. I’m getting a lot of requests for affordable housing in this area but there just isn’t any. Rents are high and young people don’t have the credit to afford to buy a traditional home.” 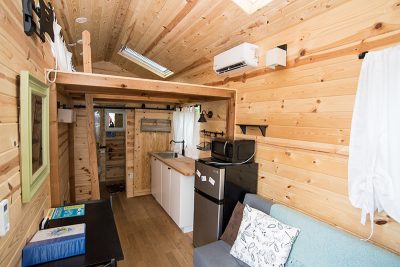 Caneen’s model tiny home is just a sample: Tiny homes can be larger or smaller, with more or fewer amenities.

On Sept. 15, the New York Times ran an article penned by Alan M. Berger, a professor of landscape architecture and urban design at Massachusetts Institute of Technology. It was entitled, “The Suburb of the Future, Almost Here.”

In the article, he described the community he sees the Millenial generation longing for: Smaller, sustainable homes lacking the water impervious pavement of driveways where autonomous cars are called up from a smart phone. He described a community with no fences; with walking paths and a landing pad for drones that provide deliveries from Amazon Prime.

What he described, perhaps aided poorly by a utilitarian illustration, sounded more dystopian than utopian. But it does serve to show that Caneen is on to something.

It differed significantly from Caneen’s idea of a community, where people live and can work together. A community where residents can walk to classes at Hillsborough Community College or to a job at Amazon. While she had no mention of fences, she did mention her love of dogs and plans to include a dog park in the community. It would be a place where people can fish for dinner…or simply walk out into their yards for it. Most people have heard the phrase “farm to table.” Caneen’s idea involves yard to table. 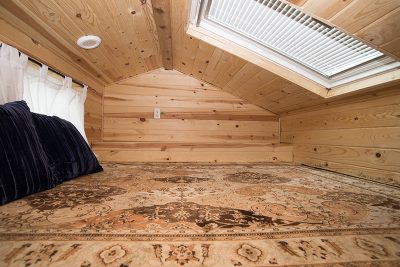 Upstairs there is room for a queen-sized bed and residents can fall asleep with a view of the stars.

“The key is sustainability,” she said. “The idea is that when you step out of your tiny home, you could have an organic salad in your yard. I want it to be a community of like-minded people. If we all want sustainability, organic food, aquaponics in the pond, permaculture on the land, beehives for honey, a small dog park…”

Although her four-and-a-half-acre property is zoned for at least 48 mobile homes, she plans to keep the community smaller, with only 24 tiny homes, all with waterfront access to the namesake pond. The rest of the property will be for natural space and permaculture.

Caneen said that she wakes each morning with more ideas. And rightfully so because such a community is a wellspring of ideas and there are few places better suited than Florida for such a place. The growing season is year-round.

Consider a resident who makes fresh bread or jellies from ingredients grown on the property to sell to other residents and thus creates a source of income, while serving neighbors. Consider the small business potential of a “tiny home grocery store” that could spring up next to the property. Consider carpentry, ride-sharing and a near endless stream of services that could emerge to serve such a community.

Caneen also hopes others are inspired to create their own pocket communities of tiny homes, thus giving people options on where and how they choose to live.

But largely, she cares about affordability. Her plan is to charge approximately $375 for lot rent and, with a typical tiny house mortgage, keeping the total housing cost at no more than $800 per month.

That opens the door to new freedom for young adults, and also, importantly, provides the opportunity for the pride of ownership in having their own homes.

“How much a tiny home costs depends upon the man hours needed, the skill level and how much you can contribute,” Caneen said. “The young lady who built the model did the carpentry work with her dad. She did hire someone to do the electrical and plumbing but she did everything else.”

“There is a crisis on the way — we have aging baby boomers that will need young people for care,” Caneen said. “We need young people here. The answer is to create pocket communities where they can live, where healthy food and vegetables are grown. The benefits of eating nutritious food are enormous.”

“I want people to know that we need workforce housing here in Southshore,” she continued. “I’m trying to do my part to help with that, to encourage sustainability, to help young people start to grow their own healthy food and to have it just by stepping outside of their door.” 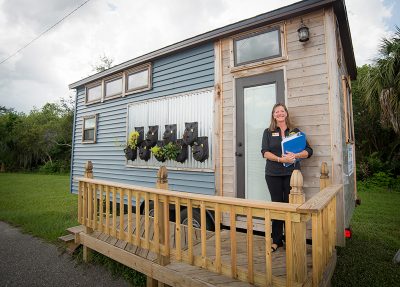 Debbie Caneen on the removable, portable front porch of her tiny home. She will hold a Tiny Home Show at HCC in Ruskin on Nov. 11.

As for sustainability, that goes beyond food. Henschen, the USF student who built Caneen’s model home, actually lived in it. In one month, with the air conditioning keeping the tiny home chilly, her electric bill was just $12.

Inside the model, there is room for a queen-size bed upstairs, with a roof window under which residents can doze off to a view of the stars. There is a full bathroom, with a tiny bathtub and a shower. Each part is made to be easily replaced. Each piece serves at least one function — and often more than one.

There is little room for the extraneous stuff, things that clutter life and simply drain away cash.

Caneen will host a “Tiny Home Show” at the Ruskin campus of Hillsborough Community College, 551 24th St. N.E. on Nov. 11 from 9 a.m. To 4 p.m. Her roster of planned speakers includes the gamut from building a tiny home, to permaculture and financing your own tiny home. Vendors will be on hand to discuss everything from transporting a tiny home to furnishing one. Caneen hopes to have the foundation of her new community ready to show by that time. Proceeds from the $5 admission charge will go to benefit the Firehouse Cultural Center and South Shore Coalition for Mental Health and Aging.

For now, however, her tiny home is on display at the Firehouse Cultural Center at 101 1st Ave. N.E. in Ruskin.

“We are taking tiny donations for tiny tours,” Caneen said with a laugh.

Keeping a 3,000-square-foot home air conditioned is expensive and arguably wasteful for those without large families. Downsizing, simplifying and working towards a healthy and sustainable lifestyle has a future that few can deny. The joy that comes from living simply is difficult to overstate.

“Anyone can do this,” Caneen said.

She means it — along with her husband, she plans to live there, too.