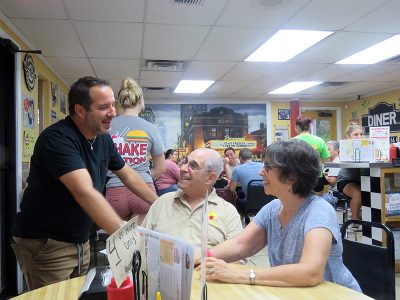 BILL HODGES PHOTOS
Owner Andy Ameres chats with SCC residents Sam and Joanne Sudman who say they really love everything about the Shake Station in Ellenton. They, like others, would like to see Ameres open a restaurant in South Shore.

The Shake Station, a popular, 50s-themed restaurant that opened in Ellenton in 2015, has a host of fans north of the Manatee County line.  So many, in fact, that some of the regular diners are encouraging owners Andy and Kalli Ameres to open one in the South Shore area—a suggestion they say is certainly food for thought.

In the meantime, they are enjoying their reputation as a fun place to go. “The ’50s era is timeless and appeals to all ages. We designed the Shake Station to be a family place and chose upbeat staff members who reflect a positive attitude,” Ameres said.  He said the ’50s theme was inspired by a similarly themed restaurant (Frostbite in Frostproof, Fla.) owned by Kalli’s dad.

It isn’t surprising that Ameres wanted his own restaurant. He grew up working in the family business owned by his parents, Emmanuel and Popi Ameres. The five Popi’s restaurants (named for his mother) and four franchises are all in South Florida. One Popi’s is in Ruskin.

Ameres said he always had his eye on the Ellenton site when it was Big L, a breakfast and lunch place that had been operating there for 37 years. His eyes light up when talking about the success of his operation that seats 80 inside and 60 outside. “I wanted something of my own that was exciting and fresh, and it just took off from the very beginning.”

With a name like Shake Station, unique ice cream offerings are expected—and delivered, but Ameres points to the burgers as the heart of business. They serve fresh, hand patted, hormone-free Black Angus chuck beef cooked on the 40-year-old grill held over from Big L’s operation because, as he said, “It is already seasoned.” But this eatery is far more than burgers and ice cream; its expansive offerings include fresh salads, wraps and creative sandwiches. Even some ’50s classics like Olde Hot Brown and Sassy Spaghetti are on the menu. 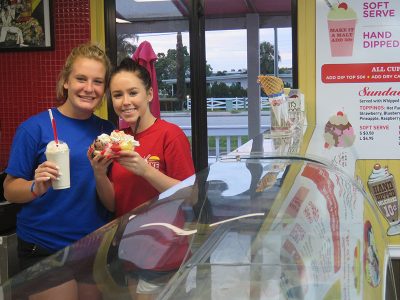 At the Shake Station, you expect a selection of fabulous hand-dipped and soft-serve ice cream treats, and you won’t be disappointed. Camryn Mark and Ashley Price take pride in the banana split and shake just created for customers dining on the patio.

The restaurant’s ’50s concept combined with delectable dishes is apparently a winning combination.  Sun City Center residents Sam and Joanne Sudman first dined at the Shake Station about a year ago with some friends and fell in love with the place. “We come about once a week, and it’s always packed with customers of all ages,” said Joanne. “We love the music. The food is delicious and reasonably priced, and the servers are always smiling.”

“This is my home; my family is here,” said Andy, when asked about his return to Florida from New York where he had a lucrative restaurant post in New York City. He went to New York after earning a degree in hospitality management from Johnson and Wales University in Rhode Island, but decided the big-city restaurant business wasn’t for him.  After he returned to Manatee County, he managed the Lakewood Ranch restaurant before starting the Shake Station in Ellenton. For a time, he managed both operations.

Visit the website www.shakestation.com for menu items, hours and more about the restaurant.