Four candidates announce bid to be Riverview’s next honorary mayor 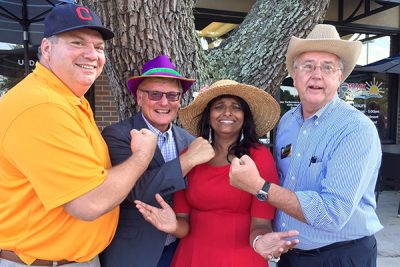 LOIS KINDLE PHOTO
The four candidates competing for the title of Riverview’s honorary mayor for 2018 take playful jabs at each other before officially announcing their candidacies at the Greater Riverview Chamber’s Big Reveal Sept. 20. From left are Dennis Napoli, Bryan Thatcher, Shirley Bhat and Michael Beiter.

One of the most hotly contested titles in South Shore is up for grabs, and four members of the Greater Riverview Chamber want to claim it.

Starting Sept. 26 and ending Oct. 24, the candidates will glad-hand with strangers, beg from family and friends and host a plethora of public events to secure votes and raise money for the chamber and their charities of choice.

Every dollar they collect counts as a vote, so the one who raises the most money wins.

During last fall’s 2017 honorary mayor’s race, four candidates raised more than $40,000, and 60 percent of the total went to charity. The remaining 40 percent went to the chamber. Tammy Holmberg, owner of Chick-fil-A Brandon, walked away with the title and donated more than $14,000 to YMCA Camp Cristina. Other candidates also made donations to their charities.

The chamber’s Big Reveal for the 2018 honorary mayor’s race took place Sept. 20 at Re/Max South Shore Realty, where the following candidates threw their hats into the ring and announced their charities: 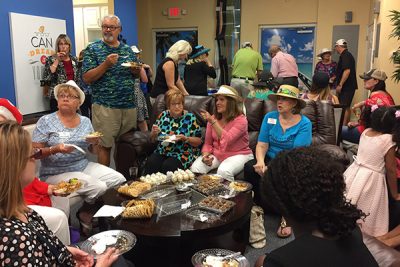 LOIS KINDLE PHOTO Greater Riverview Chamber of Commerce members enjoy Thai food and network at Re/Max South Shore Realty while waiting to learn who will be running for honorary mayor and the charities they will represent.

• Shirley Bhat, member of the FishHawk-Riverview Rotary Club, will raise funds for the Coins for Alzheimer’s Research Trust (CART Fund), a charity the club is supporting this year. The 35-year-old Riverview resident is a wife and mother of two, community activist, volunteer and current chamber ambassador.

• Bryan Thatcher, of Thatcher Properties, will raise money for Seeds of Hope Inc. and T.H.O.R.N. Ministries Inc. Thatcher, 62, a chamber member for the past 13 years and its immediate past president, was named Riverview Citizen of the Year in 2013. The retired physician lives in Valrico with his wife and two of their seven children. 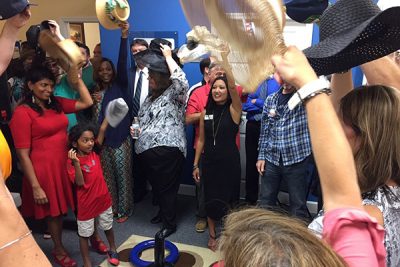 LOIS KINDLE PHOTO
Attendees remove their hats all at once to keep the candidates’ names a secret before putting them back on and revealing who would actually be tossing their hats into the race. The four actually running kept their hats off, and then tossed them in the ring.

• Dennis Napoli, of Gecko Floor Care, will collect money for the Faces of Courage Foundation. Napoli, 50, is a resident and business owner in Riverview who is married and has two sons. He and his family relocated from Cleveland two years ago to start their family owned and operated service company.

Chamber officials are anticipating big results from these folks.

“Because the candidates in our last two races did so well in their fundraising, the board decided this year to increase the funds going to charity to 75 percent,” said Debbie Kirkland, chamber membership director, adding that this gives added incentive to this year’s title seekers.

“With all their enthusiasm and creativity, we’re expecting a terrific year for (both) the charities and the chamber,” she said.

The funds the chamber receives will go toward its operational expenses.

The following is a list of the candidates’ upcoming fundraising events: 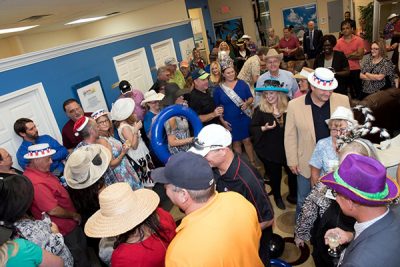 The winner, who will serve a one-year term on the chamber board and represent the organization at chamber and community events, will be announced at the chamber’s monthly membership luncheon Oct. 24 at The Regent. The other three candidates will be designated deputy honorary mayors who will fill in any time the honorary mayor is absent.

“All four of these folks are friends, and although there will be some good-natured smack talk, the race is about bringing exposure to the charities,” said Tanya Doran, director of the Greater Riverview Chamber. “With so many events to choose from, there’s something for everyone to come out and support.”

For complete event details or to donate on behalf of a candidate in lieu of attending an event, visit www.riverviewchamber.com or call 813-234-5944. RSVPs are appreciated.