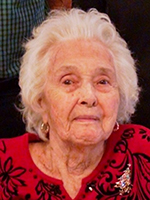 Margaret “Peggy” Nichols passed away Sunday, September 10, during the hurricane.

She was born in Falls Village, Conn. on December 27, 1916, and was the only child of Arthur and Lily Dean. She went to a one-room schoolhouse in Falls Village and went to high school in Canaan. She went to the University of Connecticut, graduating in the class of 1937. At UCONN she met fellow student Arnold Nichols who she married in 1940. They were happily married for 64 years until he passed away in 2004. During their journey, they lived in Waterbury, Newington, and Simsbury, Conn. They were snowbirds until 2000 when they purchased a home in Sun City Center, Fla. She loved gardening, knitting, bird watching and playing bridge.

A Memorial Service will be held at a later date in Connecticut. Visit www.suncitycenterfuneralhome.com. Arrangements by Sun City Center Funeral Home, 813-634-9900.

Ernest Russell Simmons, 73, passed away September 14, 2017 at his home in Ruskin, Florida, under the care of Hospice, family and friends.

He was preceded in death by his son Aaron J. Simmons in 2009, and daughter Michele Lynn Simmons in 2011, both from Apollo Beach, Florida.

Ernest loved being outdoors, hunting, fishing, and he loved his children, family and friends. He loved life itself. At his request, cremation only with no services. Arrangements by Zipperer’s Funeral Home.

Lloyd Harrison Flagg of Sun City Center, Fla., passed away peacefully September 13, 2017, with family by his side. He was 76. Born in Salem, Va., to William Richard and Perma Dewease, he served in the U.S. Army in Vietnam. He was a lifelong civil servant, retiring from the U.S. Department of Public Health.

He is survived by his wife Barbara (Agee), his daughters, Michelle Madeux (Lonny), and Nichole Dewease, as well as a brother, Frank. He leaves behind five grandchildren, numerous nieces and nephews, and many friends and colleagues. The family requests contributions be made in his honor to Moffitt Cancer Center, The Southern Poverty Law Center or your local food bank.

Annelle “Dianne” Von Der Hofen, 67, of Apollo Beach, Fla. passed away September 17, 2017. She is survived by her loving family and friends. Services will be held on Saturday, September 23, 2017 at Stowers Funeral Home, 401 W. Brandon Blvd., at noon with a visitation one hour prior. Online condolences may be left at www.stowersfh.com

Sterling E. Ruark passed away Sept. 3, 2017. He retired as a sales engineer in the paper industry after 42 years of service. He was a member of the Front Porch Pickers, Sun City Center Bluegrass group and a member of F&AM Pythagoras Masonic Lodge.

A celebration of Sterling’s life will be held from 2 to 4 p.m., on Saturday, September 23, 2017, in the Florida Room, , Pebble Beach Boulevard North, Sun City Center, Fla. Visit suncitycenterfuneralhome.com to access his tribute. Arrangements by Sun City Center Funeral Home, 813-634-9900.

Lunch on the island. Almost.