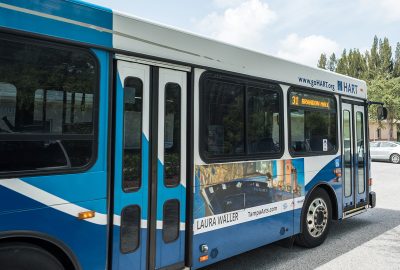 Changes coming in October to Hillsborough County’s regional bus system will do little to enhance services in the southern part of the county, mostly due to low ridership and an extremely tight budget.

“South County, specifically, is the downside,” said Katharine Eagan, executive director of the Hillsborough Area Regional Transit Authority, or HART. “If you are in the urban core where the vast majority of our passengers are, your life is going to get better. Investments are to focus on areas with the density that carries this kind of service.”

What the changes in routes and service means for some outlying areas is that they will see, in almost every case, express bus services being discontinued and replaced with vanpools overseen by the Tampa Bay Area Regional Transportation Authority, or TBARTA.

Southern Hillsborough County, including Riverview, Brandon, Plant City, Ruskin, Apollo Beach and Wimauma will all have local routes only, but can connect to buses that will get them to downtown Tampa, Tampa International Airport and MacDill Air Force Base.

From the Brandon mall, downtown and MacDill commuters can get directly to their destinations, Eagan said.

“We are getting rid of Route 47, which is the express” from downtown to Riverview due to low ridership, she said. “It averages about as many passengers as in a vanpool.”

The 53 LX, which runs from Kings Point to the Brandon mall is also being discontinued. It will be replaced with a “shopper trip” twice a week, likely on Tuesdays and Thursdays, Eagan said.

The TBARTA is already receiving inquiries about vanpools, said Michael Case, principal planner for the agency that operates the Lee Roy Selmon toll road. The vanpool will cost a bit more than a monthly bus pass, which runs $85, but it will also have complete flexibility depending on who signs up to share the ride.

Case said HART has been distributing fliers in south county to let riders know how a vanpool works, what it costs and where they need to go to sign up. “They’ve helped us subsidize the vanpool.

“We’ve seen an uptick in requests for information. We operate the vanpool program as public-private partnership with Enterprise Ride Share, so a lot of the calls we get, we direct to them,” Case said. “They help connect riders and route them. You can either meet up with the vanpool or get picked up.”

The TBARTA puts together a map for employers to show potential routes for vanpools. Through HART, they would see a map that shows a list of other people that have similar origins and destinations.

Typically, because there is a cost, it works best if riders are at least 20 miles from their destination because each eight-passenger Chevy Traverse, SUV, is $1,000 a month for lease. That gets cut down to $600 with the subsidy. That ends up being $1 a mile throughout the month, split eight ways. Gas and tolls are additional. Everything else, from maintenance, to insurance, to roadside assistance is covered.

The average passenger will pay $95-125 per month for the service, Case said. One of the customers volunteers to be the driver and receives training and gets a background check, he said.

“The incentive for drivers is they get an allowance of 200 miles per month to use the SUV for personal errands.”