Lessons from Irma echo Andrew, ‘The Big One’ 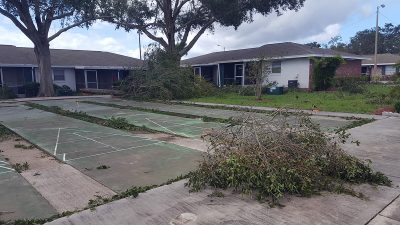 KEVIN BRADY PHOTO
Irma’s aftermath in my backyard left us with no power, damaged roofs and several downed trees but no one was injured.

Sitting with a laptop at 9 p.m. Sunday night as Hurricane Irma saws its way north from landfall in Marco Island, hoping the power stays on and our 1970s-era windows can withstand 100 mph gusts, I’m grateful for the lessons of Hurricane Andrew.

The storm struck South Florida 25 years ago, forever changing how federal, state and local government, and the media, deal with storms. Andrew, one of only three Category 5 hurricanes to ever hit the U.S., had a bead on Hollywood, a bustling city just north of Miami where I lived in a small apartment. In the last hour, Andrew veered south, killing 65 people and causing $26 billion in damage.

Reflecting on the storm last week in a New York Times story, Richard Olson, the director of the international hurricane research center at Florida International University said Andrew changed everything. “Andrew kicked our butts and we learned from it. It was a marker event in the history of South Florida and for Florida in general. Nothing was ever the same in terms of mitigation and preparedness.”

What lessons will we learn from Hurricane Irma?

For one, an appreciation for the police, firefighters, nurses, doctors, volunteers and municipal employees who put their own homes second so they can put ours first. Working back-breaking shifts, some of these folks are literally putting their lives on the line at times and are rightly honored. The people who keep the water and sewage plants online during the storm don’t get much credit, but life without their work doesn’t bear thinking about.

And how about a pat on the back for the local media? Thank God for the reasoned and calm coverage of Bay News 9 and News Channel 8. Professional meteorologists like Mike Clay, Bay News 9, and Steve Jerve, Channel 8, emphasized the seriousness of the storm without reaching for hurricane hyperbole. Filled with important local news we all needed to know – when and where was Irma, how long before she reaches our backyard, how strong will the storm be when she arrives – several local newscasts dumped their ad breaks for wall-to-wall coverage. Local print and national media did a fine job keeping track of the story online.

National broadcasters all too often seemed to be a race to outdo each other in apocalyptic predictions. And what ever happened to The Weather Channel? Once the source of some of the most informed weather coverage anywhere – and they still have some great people like Brian Nor

cross who made his name during Hurricane Andrew and a brilliant broadcaster – it now seems dominated by hurricane shock jocks who believe the height of journalism is trying to stand in 90 mph winds and oversell every gust of wind, squall line and flood in Biblical language. It’s as if someone turned the microphones over to the infomercial crew that tries to sell miracle mops in 30-minute commercials at 2 a.m. on a Sunday morning on Channel 426. It’s no surprise many people no longer take hurricane warnings seriously in the midst of this hype. Seriously guys, switch to decaf.

As panic set in early last week, thousands took to the roads, gas stations running out of gas, leaving state government to plead with gas companies for help. We see the same thing every time a hurricane threatens Florida. Why can’t the state and gas companies prepare for this? A fleet of perhaps 100 gas tankers stationed in Orlando from mid-August until mid-October, the height of the hurricane season, could be prepared to travel to any part of the state under threat and stave off the shortages.

We also witnessed one emergency manager explain he had just asked local companies with large warehouses if they could house Irma evacuees whose homes were damaged and who could not immediately return home. Great idea but why wasn’t this conversation held before the hurricane season hit?

Finally, Tampa, once again, dodged the bullet of a direct hit from a hurricane. 1921 was the last time the bay area suffered a direct hit. We are either the luckiest people in the state or God figures we suffer enough with the Buccaneers. Whatever the answer, it can’t last. When it does, make sure you are turned into a local newscast or local media website. God save us from CNN, MSNBC and Fox.