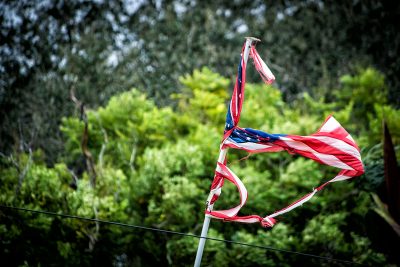 Sadly, a family evacuated for Hurricane Irma leaving their front yard flag flying. Like the Tampa Bay area, it survived, albeit battered. While a fast evacuation is understandable, The Observer News, like most of our readers and surely this family, has the utmost respect for our flag. After discussion, this photo ran to tell a story of perseverance, not to disrespect the American Flag. MITCH TRAPHAGEN PHOTOS

Four days before the hurricane a normal summer rain apparently caused panic. Perhaps the gray skies served as a reminder of what was to come. Quite possibly many people thought the rain was the beginning of nature’s apocalypse.

But it was just a normal summer day in Florida and the storm was more than a thousand miles away yet.

Yet with the light rain, and the specter of things possibly to come, the panic rose. Even as the forecast for the hurricane shifted east, away from us, people lined up for gas. They waited for trucks filled with water to re-stock grocery stores. They tried in vain to buy portable gasoline tanks.

And then, in the afternoon, the sun came out. The panic subsided; if even a little. The storm was four days away. And on what became a beautiful late summer afternoon, more than a thousand miles away on islands few people have even heard of until now, people were dying. Perhaps whole families were dying together.

No one had ever seen a hurricane like this before. Everything in the forecast was just a best guess.

Three days before the storm came…became three and a half days. The National Hurricane Center forecast had the storm slowing down. There was both good and bad in that. The intricate dance of weather systems working together meant that a slowing storm may well have increased the odds that it would stay well east of Tampa Bay. Or not. It gave people more time to prepare. It also gave people more time to think. And for some, it was more time to panic. The freeways northbound out of Tampa Bay and South Florida began to fill up. Some were already effectively turning into parking lots.

Under sunny skies, a pickup truck, loaded down with spare gas and water tanks and bundles of luggage headed north on U.S. 41 through Ruskin. The pickup may well have been their biggest asset. What was in the luggage was no doubt what was precious. 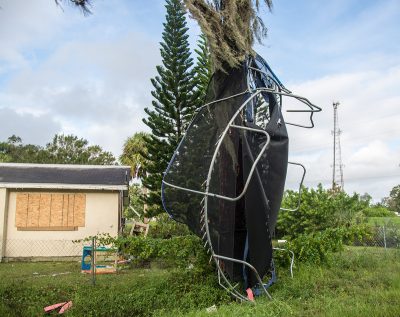 Hurricane Irma wrapped something that appears to be a trampoline around a tree in Ruskin.

Two days before the storm came, the sun rose beautifully, just like any other beautiful late summer day. Overnight, the situation took a turn for the grim. For the first time in known history, it became possible that both coasts of Florida could be getting hit by a hurricane at the same time. At 6 a.m., there was some gas, by 6:30 a.m., gas lines were forming. At the Winn Dixie, there were some small bottles of sparkling water. It was a trickle of things that were good before the darkness came. There was silence but there was also the occasional burst of chatter. It was friendly but also nervous. Strangers told each other to be safe. No one was fighting over the last of anything at all.

The forecast called for tropical storm force winds beginning the following night. Hurricane force winds would begin the night after. In the Winn Dixie, a woman said she lived in a mobile home on the river. She had nowhere to go. She said not even a pet friendly shelter would take all of the cats she had saved from a brutal feral existence over the years. They were indoor cats now. She planned to stay and pray.

But the goodness in people was becoming more evident. She was at incredible risk but she would spend her time, on this beautiful day, to help Elmira’s Wildlife Sanctuary prepare the animals for the storm. All of the animals there, the tigers, the wolves, even Elmira the Bear and a young grizzly named Stanley, were dependent upon humans. Despite the poor outlook for her home, and indeed her very life, she would spend the hours helping them.

Until she couldn’t anymore. And then she would go home to do what she could to protect the tiny feline souls who had scampered into her heart.

One day before the storm came things began to change. There was the best of people and, in much fewer cases, the worst. Water, D-cell batteries, gasoline and other basic supplies were hard to get. But in scenes repeated across the area, people began to help each other. As we prepared our boat at a Little Harbor marina, a young couple with a little girl began tying off into the slip next to us. They were liveaboards — their boat was their home — its name was Begin Again. I hoped they wouldn’t have to after the coming days. 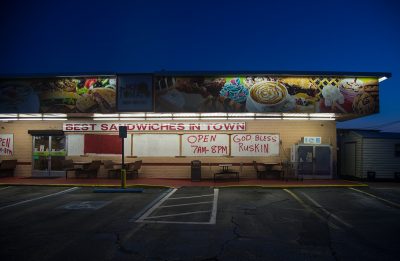 On the morning before the storm: Hot Tomato in Ruskin. They were among the first restaurants to reopen.

They needed additional lines to better tie off their boat. We needed a small piece of wood. We each had what the other needed. Despite meeting only minutes prior, we suddenly became friends who were deeply concerned for each other.

Their little girl, among the world’s cutest little girls with curly blond hair, was cradling a small, stuffed, spotted toy puppy. She said her puppy was scared and she needed to pet him… being strong while projecting the fear she could feel.

The day the storm came fears turned into horror as the Florida Keys were inundated. An estimated 10,000 people of the normal population of 79,000 remained on the island chain. Near where the eye came ashore in the Middle Keys, entire communities went underwater. The Department of Defense currently believes that the remaining people will have to be evacuated in the aftermath.

And then the storm hit again, at Marco Island. Hurricane Irma, as one of the largest storms ever recorded in the Atlantic, began pulling the water out of Tampa Bay with strong winds that sent it into the Gulf of Mexico to follow her counter-clockwise winds and into cities to the south. With a last-minute run to the marina before the weather deteriorated further, we found the floating dock to be aground, sitting in the mud at an odd angle. It would only get worse from there. Would the boats without water simply tip over? We could only guess. And hope. And pray.

While there, only hours before the heavy gusts began pummeling the area, we met Dale and Joe. They had arrived that afternoon from Ohio. Dale had just bought a sailboat and planned to come down in November for it. Irma brought him down earlier. Together, they planned to stay aboard their boat through the storm, along with Dale’s unflappable (except for the big ears) basset hound. We strongly suggested leaving but they refused. In the end, we prayed for them, too.

Driving back to our friends’ home of refuge, 15 feet higher above sea level than our own Zone A evacuation area home, there was very little traffic. The storm was beginning and people had hunkered down. Driving on U.S. 41, a homeless man wearing a large, plastic trash bag and all alone, slowly crossed the highway in front of us. More prayers.

About 2:30 a.m. on the day of the storm, Ruskin seemed post-apocalyptic. There were no lights, except for traffic signals and the rare business running under generator power. There were no cars, no people about. The damage from several hours of punishing winds was already evident. Even major roads such as U.S. 41 had so much debris they appeared more as dirt and grass country roads. Trees were down. Metal was twisted. The sojourn out didn’t last long, the winds were forecast to increase again. 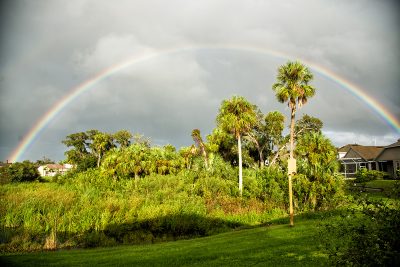 MITCH TRAPHAGEN PHOTOS
On the night the storm left, the last of the rain squalls left behind a rainbow.

On the day the storm ended, traffic began with a slight trickle and turned into a torrent. There were few places open, at a handful of gas stations that were, the lines were long. Grocery stores were shuttered. At the Applebee’s on Big Bend Road, the line of people waiting to get in wrapped entirely around the outside of the building.

On the day after the storm, restaurants began to open. FedEx made deliveries. It was estimated 12 million people were without power in Florida. Some areas had to lose their power in order to allow utility workers to safely repair the electricity for others.

He could well have said the same thing for the Tampa Bay area as well. What could have been catastrophic in terms of lives lost and property damaged was minimized by the eastward jog of the storm, away from our communities, away from the warm water fuel of the Gulf.

Joe and Dale from Ohio survived the storm, along with Dale’s still unflappable basset hound. After a sleepless night and a lifetime of stories to tell, they planned to drive back that day.

I don’t know what happened to the generous cat lady. I hope she calls or emails me. I hope the homeless man found safe shelter.

On the night after the storm ended, the last of the rain squalls ended with a full rainbow. When the worst came, people pulled together like never before. When the worst left, the sky turned beautiful.

Twenty-two people, as of Tuesday, had lost their lives in the U.S. For the first time, both coasts of Florida were hit by the same hurricane force winds at the same time. 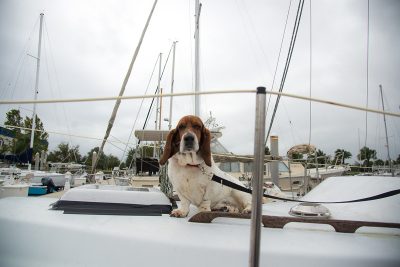 The day the storm left: A basset hound from Ohio weathered the storm aboard a boat at a Ruskin marina with his humans.