J. Frank Visicaro, 89, of Sun City Center, Florida and formerly of Florham Park, N.J., passed away on August 19, 2017 surrounded by his caring family. He is survived by his loving wife of 72 years, Josephine (Zappulla); seven children, Thomas Visicaro (deceased), Cecelia Pacifico, Gaetana (Joseph) Cicarone, RoseMary Buch, Frank S. (Debbie) Visicaro, John (Johanna) Visicaro, Philip Visicaro and 20 grandchildren, plus numerous great-grandchildren.
Frank was a devoted father and family man. He was a member of SCC Knights of Columbus and past Grand Knight from Springfield, N.J. In lieu of memorials, contributions may be made to the St. Jude Children’s Research Hospital at www.stjude.org. A celebration of his life will be held at a later date.

Nancy was a graduate of the University of Kentucky where she earned a degree in home economics and met her husband. She loved designing family homes, custom cabinetry and was a talented seamstress, avid bridge player and award-winning ballroom dancer. 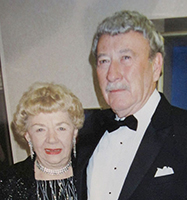 Chuck was born on October 6, 1924 in Williamsport, Pa. and moved to Washington D.C. after his service as a Sargent in the USAF during World War II. He met his wife Helen (Precious) at a local riding stable in Washington, D.C. They were married in August 1947 and started a family.

Chuck lived a long and loving life with his wife Helen and their three sons. He had a great sense of humor and collection of lively and worldly friendships. They were both members of the Lions Club and also worked on numerous charitable activities.

As a member of the USAF, he served as a Sargent in the South and West Pacific during World War II.  After the war, he worked as a salesman for Johns Manville Company.  Soon thereafter, he was an agent and manager for State Farm Insurance Companies when he retired in 1992.

Chuck and Helen moved to Sun City Center, Fla., in 2002 after living in Rising Sun, Md., for many years. They had a great love for boating both in the Chesapeake Bay and Tampa Bay. They both enjoyed traveling and after retirement cruised around the world with a variety of cruise lines. Helen passed away on March 8, 2013, she was 99 years old.

Chuck will always be remembered for his larger-than-life personality and selfless giving of his time to numerous charitable organizations. Chuck’s humor, practical wisdom and essence will always remain with all of us.  We will miss him dearly.