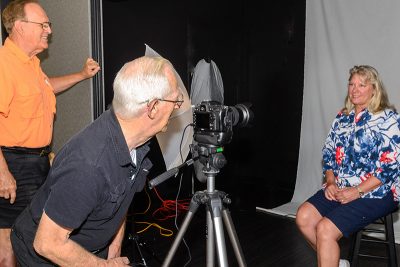 Susan Kitchenmaster was the 500th veteran to be photographed for the SCC Community Association Veterans Wall of Honor shown in the Central Campus Atrium. From left, Bill Hodges, Andy Ledoux and Susan Kitchenmaster. PHYLLIS HODGES PHOTO

milestone in the Sun City Center Community Association Veterans Photo Project was reached at the last photo session in June. (They start again in September.)  Bill Hodges, who manages the project with the help of photographer Andy Ledoux, said the 500th veteran was Susan Kitchenmaster, who was a U.S. Navy dental hygienist. She came to Sun City Center two years ago from Sarasota.

Hodges and Ledoux began the project two years ago, with photo sessions nearly every month for veterans who have served in any branch of the U.S. military; that includes National Guard, Reserves and Coast Guard. Hodges said it is their goal to include every CA member veteran. “No proof of service is required,” he said. “We take their word.”

A Veterans Wall of Honor TV presentation with those photos runs 24/7 in the Central Campus Atrium Building off North Course Lane.  Hodges said, too, that the video is also included on the CA website (www.suncitycenter.org) in the “Residents” section under “Things You Need to Know.”

“We have wanted to do that for some time so that our members and their families can watch it on line and fast forward to the photo they are looking for,” he said.