Observations: Zen and the art of ‘You’re welcome’ 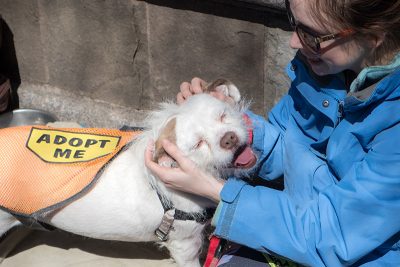 MITCH TRAPHAGEN PHOTO
Dogs don’t have a problem in acknowledging others, or even in the worst of circumstances, being thankful. We could learn a lot from them.

I truly enjoy saying “Thank you” to people in the New York City area. There is something powerfully steeped into the culture of the area, both New York and New Jersey, in which people always reply with a “You`re welcome,” in a nearly universal sing-song kind of voice. It doesn’t matter if it comes from a burly bus driver or an idealistic young waitress. It is more than a social norm — it is an acknowledgement. People, especially strangers, acknowledging each other would seem to be a good thing today.

There are parts of the South where that occurs, too — and it’s often completed with the word “honey.” As in, “You’re welcome, honey.” In such places that remain, those words seem heartfelt and that makes it extra cool. I think Tampa is just too mixed now — there are fewer social norms left with so many people coming from so many different places.

But that’s not to say that people aren’t nice in the Tampa Bay area. On that note, I present to you both Wes and William. Wes is the owner of a small company in suburban Hillsborough County. He cares for his employees as though they were family and in his mind and heart, I have little doubt that they are just that. He found out that one of his employees was having problems with her electrical service. He offered to help. Repeatedly. And he was repeatedly rebuffed. The employee didn’t want to be a burden, so she always turned down his offers.

It finally reached the point when he became concerned enough to take some matters into his own hands because electricity is nothing to mess around with. Problems with electricity can be problems that prove fatal, through fire or electrocution. Neither are good things to consider, especially when it came to a highly valued, loved employee who was effectively a member of his family.

So, one Saturday he simply told her that he was going to show up to help and if she wouldn’t let him in? Well, at least he tried. He showed up, she wasn’t home.

So, he decided to call TECO to find out if her electrical problems were coming from outside her condo in a retirement community. Calling in for service on a property that isn’t yours would seem like it would be a problem in today’s outrageously bureaucratic world. But Wes is a good and honest man and that comes through in everything he does. He convinced TECO to send someone out.

And that is where William entered the picture.

Remarkably, within 15 minutes or so William pulled into the little parking lot with shaded car ports on that steamy hot afternoon, driving an enormous TECO truck. Wes explained what was happening and William immediately understood. He has family that he worries about, too. He found the outdoor location where the power lines went into the condo and began running tests. In all, he spent a good 45 minutes making absolutely certain that nothing was wrong with the power going in. Incredibly, William truly cared, too. TECO hired a good and impressive man in him. As he finished up, determining all was well on the outside, he told Wes, “Well now you know what you have to do.”

Which meant somehow getting inside and replacing what are almost certainly bad circuit breakers.

Wes hasn’t quite succeeded with that yet but he’s still working on it. She’s family, after all. And I am relatively certain that one day soon, he’ll hear a “Thank you” from her, to which he will respond, “You’re welcome.”

As is somehow often the case, I’m writing to you while on a JetBlue flight. My flight up to New York, just a few days ago, was less than ideal. I’ve flown so much that I always book aisle seats. While many hard-core fliers recommend window seats to have the side of the cabin to lean against for a flight-time nap, I prefer the aisle — I like the impression that it is somehow more spacious with the empty aisle next to you. I never, ever choose a middle seat but have occasionally been stuck in one — twice on flights out of Tampa.

A few months ago, I was in my aisle seat waiting unbuckled for whomever may be in the window and middle seats. A woman in her 60s approached and asked if there would be anyway I would consider switching seats with her. Her middle seat for my aisle seat. She added that she often has to use the restroom and felt embarrassed about it.

Well of course I would switch seats. And then, a few minutes later, an extremely large man who I later learned was her son, came lumbering up for his window seat. He was actually too large to fit in the seat, necessitating leaving the armrest up. I had just over half of my seat left. To put it mildly, it was an extremely uncomfortable flight, only made better by a wonderful flight attendant who mercifully handed me an airline-sized bottle of cabernet sauvignon. And then later returned to offer another.

So…the woman never once needed to use the restroom. She just didn’t want to have to sit next to her extremely large son. And she wanted to make certain I paid my fair share with the wine. She never even thanked me for giving up my seat.

On the way off the plane, the flight attendant said, “I saw what you did in giving her your seat. I thought the least I could do was to help a little with some wine.” I told her thank you and that she was wonderful. She smiled and said, “You’re welcome.”

On a flight a few days ago, I was settled into my aisle seat next to a young girl at the window and apparently, her mother in the middle seat. A man tapped me on the shoulder and asked me to trade seats with him so he could sit next to his wife. My camera gear was above me so I asked where his seat was. He pointed to a middle seat across the aisle. In the aisle seat was an elderly gentleman who could not get up without assistance.

In all honesty, I hadn’t properly planned while in the airport to spend three or more hours without using a restroom, but how could I deny a man sitting with his wife and child?

Well, his child put earbuds in and went into her own place. The husband who so lovingly wanted to sit next to his wife? He didn’t say a single word to her for the entire flight.

And he never said thank you for giving up my seat.

Upon landing, I scooted out in front of the elderly man, grabbed his cane and carry on from the overhead bin and helped him to the waiting wheelchair in the jetway.

“You’re welcome, sir,” I replied. It felt good to say that.

And then I dashed off for the restroom.

All of that said, I’m afraid the stressful times we live in make it difficult for people to express gratitude. And more difficult still to acknowledge it.

It was a hot Saturday afternoon and William, in heavy long pants and long-sleeved shirt, along with a TECO hard hat, had done everything he could to be certain that the power going into the condo was right and safe. Wes shook his hand and said, “Thank you.” William met his eyes and replied with, “You’re welcome.”

Both men meant it.