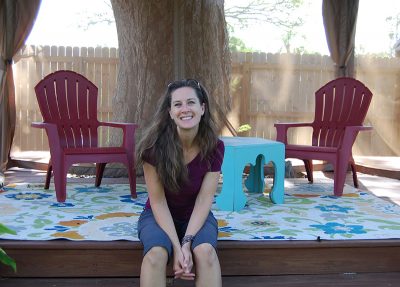 When business was slow during Nicole Deitrick’s first year as a massage therapist, she would look out the window and dream of the perfect studio for her to promote her health and wellness concepts.

“I wanted a pond and a place for people to go outside and rest. I wanted an outdoor treatment space,” she continued in her blog post.

Eighteen years later, Deitrick owns North River Body Therapies in a freestanding building at 1415 10th St. E., Palmetto, and offers many of those services she dreamed about.

“Within the first two years of my practice I realized I wanted to offer more,” she said in an interview at her day spa last week. “I had this bigger vision.”

Deitrick believed if you work hard, your dreams will come true.

The day spa, just west of the tiny space she rented when she first started, offers massage therapy, skin care, yoga and acupuncture.

And there’s a large landscaped backyard with a gazebo, hammocks, pond and fountain where outdoor yoga classes are held and her clients can relax after a massage.

An outdoor garden area has always been part of the dream.

“I knew this space had to come,” Deitrick said.

She remembers shortly after she moved to Manatee County from Pennsylvania, she and her husband, Brian, were working hard to afford to stay in Florida.

“We had no money,” Deitrick said, “I was feeling stressed.”

There was this bookstore on Manatee Avenue she would drive by on her way to her bartending job.

“I went into the bookstore and knew I just wanted to be there,” she said. “I told the owner, Karen, that I didn’t have any money to buy anything.

“She sat me down, gave me some tea and told me to take my time looking at the books,” Deitrick recalled.

She remembers the comfort Karen provided and how she felt calmed.

“I had a tough day, and she cared for me,” Deitrick said. “I want to provide that same feeling for others in this garden.”

Deitrick moved to Manatee County from the Philadelphia area in 1994 for the same reason many people do, “the weather.”

“We just got married and we packed up everything and moved one month later,” she said.

She worked as a bartender for about four years. Then when Deitrick and her husband planned to start a family she decided to do something more meaningful. 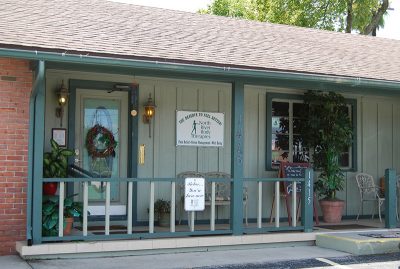 “I realized it was too far to go to school and raise a family,” she said.

She got a job providing massages for horses, and while practicing that profession realized she needed to know more about kinetics and anatomy.

“I went to Sarasota School of Massage Therapy, but had no intentions of working on people,” Deitrick said.

It was strictly to learn more so she could be better at working on horses.

But during her training in massage therapy she started to practice on people, and it clicked.

“This is who I am and what I’m supposed to be doing,” Deitrick said.

Deitrick got her massage therapy license in September 1999.

“I was completely flat broke, but I knew I wanted to have my own business and not work for someone else,” she said.

Deitrick heard that an Ellenton barber shop, Don D’s, was looking for a massage therapist to practice in a small room in the shop.

Rent was $150 a month, but since she could not afford even that amount, she struck a deal with the owner.

If he would hire her as a receptionist she could afford the $150 until she had enough clients to pay her rent.

Deitrick was at Don D’s for about a year before she found a larger space she could afford in the Ellenton Plaza across the street, where she stayed from 2001 through 2013, making several moves into larger units within the shopping center as her business grew.

As Deitrick gained more massage clients, she started to hire additional massage therapists, and also began to offer other services, such as skin care and acupuncture.

But she still had that dream of having her own building with a big yard.

Every day when she would drive to work, Deitrick would pass by the building she now owns thinking how great of a location for a day spa it would be.

When she saw a “for lease” sign, she immediately called the number.

That was in November 2013, and after some remodeling, Deitrick moved in to her new facilities in early 2014.

“I have a great feeling of coming a long way as a person. It was worth the wait,” she said.

Having grown up with her father being a chiropractor, she always was aware of taking care of the body for health and wellness.

“I never knew anything about traditional medicine,” Deitrick said. “If I had an earache, my father would give me an adjustment and the ear ache would go away.

“If I had a cold, I would get an adjustment and the cold would go away,” she said.

Deitrick worked in her father’s office since she was 13 years old and would see other patients leave with positive results.

“Chiropractic is for more than neck and back pain,” she said. “They believe in trying something less invasive first.”

Her experiences in her father’s office as a young girl led her to massage therapy, which has the mind and body connection.

“People come in with a lot of stress,” Deitrick said. “Sometimes the most important thing is to just listen to them before even putting a hand on them.”

“Yoga has brought a new dimension to what I do,” she said. “During class I look at their bodies and see what the students need.

“I think, ‘What kind of stretching would help improve their wellbeing?’” Deitrick said.

Adding the yoga classes only made her business more successful.

“Nicole is the most amazing, ever-expanding small business owner I’ve seen,” said Yvette Little, owner of Simply Green Solutions, LLC, and one of Deitrick’s clients. “She’s never met a challenge that she doesn’t turn it into something even better … for everyone.”

“After several years of trial and error, I have found a way to hire talented staff that are passionate about taking care of our clients,” Deitrick said. “I am very proud of my team, and I know without a doubt, that the success (of North River Body Therapies) is directly related to the support and talent of my team.

“I could not have accomplished these dreams alone,” she said.

Deitrick and her husband, Brian, who works in operations at Sysco food distributors in Palmetto, have two children

Their daughter, Taylor, 18, graduated in June from Manatee School for the Arts in Palmetto, and is now studying business at State College of Florida. She works in her mother’s shop two nights a week.

The Deitrick’s son, Aiden, 11, is in the sixth grade at Manatee School for the Arts and focusing on music with an interest in theater.

For more information about North River Body Therapies, call 941-721-4559 or visit its website at www.NorthRiverMassage.com.

To read about Nicole Deitrick visit her blog at www.theacornroom.com.