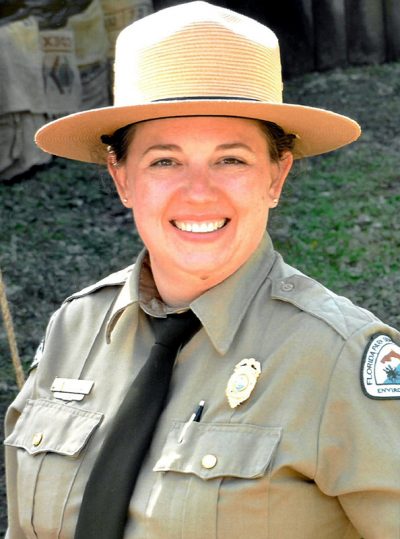 FLORIDA PARKS SERVICE PHOTOS
Ranger Patti Cross is the new manager of the Little Manatee River State Park in Wimauma. She has been employed by the Florida Parks Service for the past 17 years.

One of southern Hillsborough County’s hidden treasures is under new management these days.

In March, Patti Cross, a 17-year employee of the Florida Park Service, replaced Park Manager Joe Howard after he retired. Since then, she’s been quietly implementing changes to benefit the state park, its inhabitants and the public.

“The sleepy-park feeling here can be deceiving,” said Cross, 45. “But there’s always something going on.”

“We’re removing feral hogs and invasive, exotic plants, including Brazilian Pepper, Cogan grass, air potato, skunkvine and Japanese and Old World climbing ferns,” Cross said. “Thanks to a grant from the Florida Department of Environmental Protection, we’re in the process of replacing the campground bathhouse. Planning and permitting are underway (for the new structure). Since the old bath house is closed, we built a handicap-accessible ramp to several temporary portables.”

The North Trailhead of the Florida Trail, the Little Manatee River State Park’s most popular hiking trail, has been improved by staff to make it more inviting to park visitors.

And rangers are working on updating trail maps to make them more user-friendly and dressing up the park’s informational kiosks.

Visitors may notice some areas that, for the moment, aren’t that aesthetically pleasing. That’s due to “acreage cutting to reduce the size and coverage of woody vegetation grown in the absence of fire and to reduce wildfire hazard and restore historical, ecological community conditions,” Cross said. “It may look ugly for a while, but the area will restore very quickly.”

The cutting is done with a giant, lawnmower-type machine. Once the vegetation is cut, park rangers then do a controlled burn of the area to meet land management objectives for restoring optimal habitat conditions. 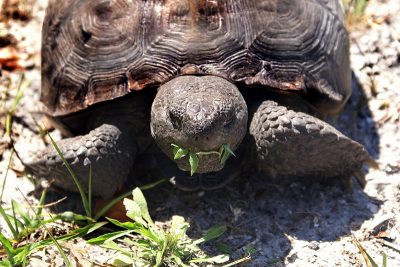 The Little Manatee River State Park is home to a wide variety of wildlife, including the federally protected gopher tortoise, which is currently on the government’s Endangered
Species List.

“The longer I’m here, the more I love this park,” Cross said. “It has huge changes in elevation (from sea level to 65 feet) and 11 different natural communities, almost 5 miles of (the Little Manatee) river and tons of creeks.”

She also appreciates the large array of wildlife living and appearing in the park.

The self-described “Army brat” was born at Fort Huachuca in southern Arizona, came to Florida at age 4 and was raised in Safety Harbor.

She started her career with the Florida Park Service in 2000 after a friend, a park ranger in Orlando, recommended she get involved and recruited her as a volunteer. Hired as a part-time ranger, Cross became full time shortly after and went through two weeks of ranger training at Wekiwa Springs State Park in Apopka. Subsequent training was on the job.

Her first assignment was Ybor City Museum State Park, which she found “historically rich,” and the “community unique and ethnically diverse.” After four years there, she decided she needed to broaden her experience and transferred to the full-facility Hillsborough County State Park, where she was later promoted to assistant manager.

An opportunity for the single mother to move to Tallahassee to work in the Florida Park Service’s central headquarters gave her the opportunity to earn more money over six years in administrative positions of increasing responsibility.

But the call of the outdoors beckoned once more.

In 2012, she returned to Hillsborough County State Park to gain additional field experience.

Earlier this year, she transferred to Little Manatee River State Park, where she now lives on site as its manager.

The Little Manatee River State Park, 215 Lightfoot Road, Wimauma, includes more than 2,400 acres of land and a portion of the Little Manatee River, which according to the Florida State Park’s website “begins in a swampy area near Fort Lonesome and flows almost 40 miles before emptying into Tampa Bay. The river has been designated as an Outstanding Florida Water and is part of the Cockroach Bay Aquatic Preserve.” 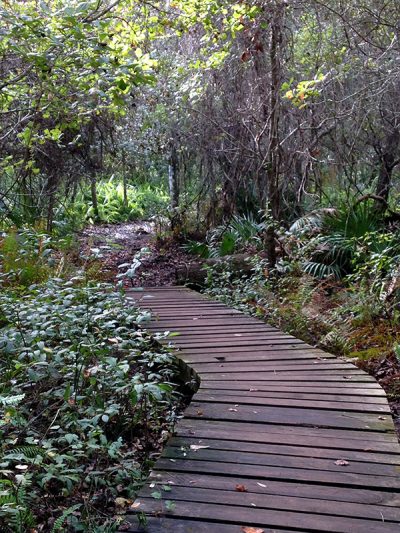 The 6.5 mile North Trail is the Little Manatee River State Park’s most popular trail. Hikers can access the trail even after the park is closed.

The park is offering a variety of events this fall during its annual Park after Dark Series. These include:

• Creature Feature, 8 p.m., Sept. 9. Learn about bats and their amazing lives, and meet some live animals while you’re there.

• Night Hike, 7 p.m., Oct. 14. Join others in hiking by moonlight, letting your senses be your guide.

• Art of the Campfire, 7 p.m., Dec. 9. Celebrate the rituals that have brought people together around the fire for hundreds of years. The event includes campfire cooking, stories and music.

The cost for each program is $5 per vehicle of up to eight people and $4 for those with a single driver. Both are payable using the park’s honor station, since the ranger station is closed after 5 p.m.

Visitors are asked to wear comfortable clothing and closed-toe shoes and bring water, insect repellant and a flashlight.

The park will also offer a 4- to 6-mile group bike ride at 5 p.m., Sept. 30, on its paved road.  Participants must bring their own bicycles, water and helmets.