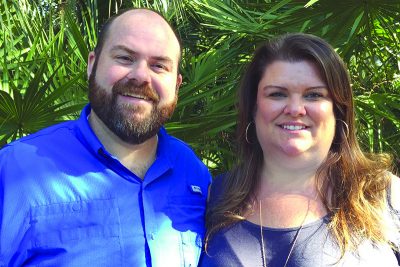 LOIS KINDLE PHOTO
Dan and Chrissy Hartzog, of Ruskin, own Heartfelt Adoptions, a private, licensed child-placement agency at 3800 W. Bay to Bay Blvd., Tampa. They are the proud parents of 6-year-old Emma, who they adopted at birth, after trying for years to have a child.

For some women, raising a child isn’t an option, and for others having one isn’t possible. That’s the reason private agencies like Heartfelt Adoptions exists.

“We bought this agency (in 2015) with the mission of building families but found our real mission — actually our ministry — is helping women in difficult situations,” said Chrissy Hartzog, 40, co-owner of Heartfelt Adoptions with her husband, Dan. Adoptive parents themselves, the two can genuinely understand the situation between both parties.

“I have a heart for women,” Chrissy continued. “I can relate to one woman’s longing to have a child and empathize with another who needs to place her child for adoption.”

The process, she said, is filled with both joy and anguish.

Dan, 43, a civil law attorney for many years, decided to make the change to adoption law in January 2015. A friend told him about a private agency whose owner was retiring. After making contact, Dan shadowed the owner and obtained the necessary licensing, then he and Chrissy acquired the agency in August 2015.

At Heartfelt Adoptions, everything revolves around what’s best for the child. Its fully professional staff offers “unbiased and nonjudgmental” services that carefully takes both the woman placing her child and the prospective parents through every phase of the adoption process.

Most of the women the agency helps are between 25 and 35, have a couple of children and are financially strapped and spread too thin. Or they have cases with the Florida Department of Children and Families and are unable to parent.

“This is one area of the law where an attorney can work as an intermediary and on behalf of both parties,” Dan said.

Recently the Hartzogs, who live on a fish farm in Ruskin, interviewed a couple in their 20s who already had three children and the wife was pregnant with her fourth.

“We discussed their options, including adoption, foster care and any family members who might possibly care for the child,” Chrissy said. “Our job has a bit of counseling involved.”

“They chose adoption for the child, and a family has already accepted the match,” Dan said.

Here’s how the process works.

“We find families who fit the criteria each woman or couple is looking for,” Dan said. “After one is chosen, we contact that family and set up either an in-person or Skype meeting.”

Chrissy added prospective families make a profile for the pregnant woman to review. They make a book that includes information and lots of photos to introduce aspects of their lives, including extended families, pets, hobbies, faiths and interests.

“Some women want families with no children, siblings or another adopted child,” she said. “Pets and trips to Disney are usually a big deal. They’re looking for memories of their childhood or the childhood they longed for,” she said.

“More often than not, one thing jumps out that leads to a decision,” Dan said.

The advantage of using a private adoption agency when a woman knows she is unable to parent is she gets to choose the family that will raise her child.

In private adoptions, the adoptive family pays for legal fees and any medical expenses not covered by insurance. In Florida, once the mother signs her consent, the adoption cannot be revoked unless her signature was obtained under duress or through fraud.