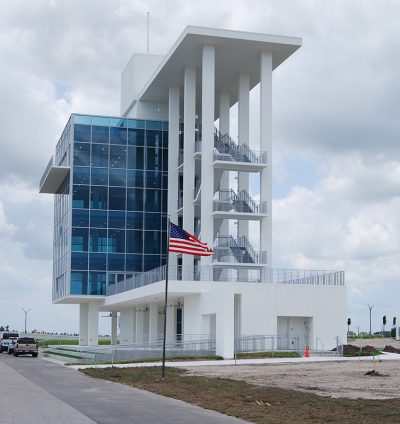 CARL MARIO NUDI PHOTOS
The exterior walls of the finish tower for the 2017 World Rowing Championships to be held at Nathan Benderson Park in Sarasota are all glass, giving race officials and fans a 360-degree view of the action scheduled for Sept. 23 through Oct. 1.

With the recent completion of a landmark five-story building, the organizing committee inched closer to the finish line in its preparation for the 2017 World Rowing Championships.

The Finish Tower, designed by the Sarasota-based Guy Peterson architect firm, was required for the international rowing event to be held Sept. 23 through Oct. 1 at the Nathan Benderson Park, on Cattlemen Road, south of University Parkway in Sarasota County.

“We designed the tower as an instrument for viewing by embracing precision and sight,” Peterson said in a press release.  “The form of the building was generated by the need to be parallel with the rowing lanes for better viewing while creating a space perpendicular to the finish line for judging.”

Bradenton-based Fawley Bryant Architecture was the architect of record on the project.

The exterior walls of the 25,475-square-foot, 103-foot-tall structure are all glass and located at the finish line of the racing lanes, making the building a signature feature of the county-own park.

During a tour of the tower last week, Peterson said much of the design was dictated by the requirements of The World Rowing Federation or FISA (Fédération Internationale des Sociétés d’Aviron), the international organization that governs the sport of rowing.

USRowing, which is sponsoring the 2017 World Rowing Championships, is the United States representative on FISA.

Meredith Scerba is the executive director of the 2017 World Rowing Championships’ local organizing committee working with FISA and USRowing. 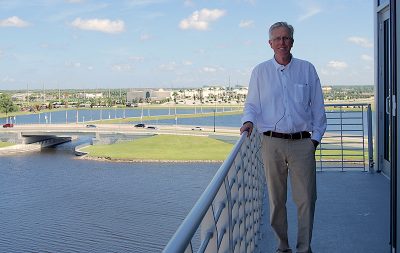 Guy Peterson, architect of the Fnish Tower for the 2017 World Rowing Championships to be held at Nathan Benderson Park in Sarasota, stands on the balcony of the fifth floor. The recovery area of the race course and the Mall at University Town Center are visible in the background.

“This event is about the community at-large,” Scerba said. “The committee has raised $8 million dollars in the community to put on this event.”

She emphasized the 2017 World Rowing Championships at Benderson Park involved both Sarasota and Manatee counties.

“This is a two-county event,” Scerba said.

About 1,700 men, women and para-rowing competitors are expected to participate in 21 class events; along with their coaches, trainers, families and fans who will be coming to the area.

“Our goal was to have 60 countries compete, which is an aggressive goal,” Scerba said. “We will exceed our goal and reach 70.

“The first teams are expected to arrive Sept. 5,” she said. “They have to acclimate to the time difference and weather.”

Scerba said the economic impact for the two-county area would be extensive over the 25 days the competitors will be here.

“We expect a $25 million impact,” she said, “and are on target of reaching that goal.”

The organizing committee’s records indicate that more than 20,000 room nights are already booked.

“It’s so much more than the 10 days in September,” said Elliot Falcione, executive director of the Bradenton Area Convention and Visitors Bureau. “The economic impact is more than just the immediate financial return from the rowing championships.

“It’s all the branding the area will receive from having the games here,” he said. “There will be television reports of the event broadcast all over the world.

And the effect will be felt beyond the two-county area because teams will be practicing at facilities all over the state, such as Tallahassee and Jacksonville.

Although no World Rowing Championships’ teams are scheduled to practice at the Fort Hamer rowing facilities in Manatee County, teams from a youth rowing event will be.

USRowing will hold its Youth Regional Challenge on Sept. 23 and Sept. 24, after the championship rowing events at Benderson Park.

The youth event will feature 312 of the top under-19 men and women rowers from across the six USRowing regions, racing in eights and quadruple sculls.

“Our end goal is to create 40,000 area ambassadors, which will have a long-term economic impact,” Scerba said. “We’re excited to be part of the event that is going to transform this venue.”

This is only the second time the World Rowing Championships have been held in the United States, with the last time being 23 years ago. 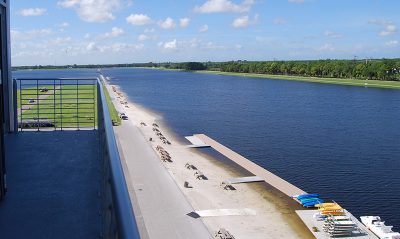 Race officials and fans have an unobstructed view of the sprint lanes of the race course from the Finish Tower for the 2017 World Rowing Championships to be held at Nathan Benderson Park in Sarasota.

The transformation of Benderson Park from an active, shell-excavation pit for road construction started in the early 1990s when Sarasota County purchased the 600 acres.

Nathan Benderson Park was developed, with the encouragement and financial backing of the Nathan Benderson Community Park Foundation, into a 400-acre lake, including the 2,000-meter sprint rowing course.

The park’s website describes all the improvements for making it a Class A rowing competition venue, the only one in the United States, as “over $40 million (being) committed to the facility’s development, including 2,000-meter racing lanes and straight shorelines, coaching lanes, wave attenuation, a multi-function boathouse and athlete training center, starting huts, the Finish Tower, grandstands and a state-of-the-art-boat maintenance and testing facility.

The Suncoast Aquatic Nature Center Associates, Inc., or SANCA, is a not-for-profit business created to manage the public park for Sarasota County.

Benderson Park is open to the public year-round where visitors can walk, jog, or ride on trails around the lake, or put their canoe, rowboat, kayak, or stand-up paddleboard into the water.

A highlight of the Benderson Park development as a premier rowing regatta facility is the iconic finish tower, which was a gift worth approximately $6.5 million from the Nathan Benderson Community Park Foundation

Peterson, who has been an architect for 40 years, also noted that he wanted the glass tower design to be timeless.

“I didn’t want anyone to say that building was from a certain period,” he said.

For more information about the Finish Tower and Nathan Benderson Park, visit www.nathanbendersonpark.org and for information on the 2017 World Rowing Championships visit www.wrch2017.com.