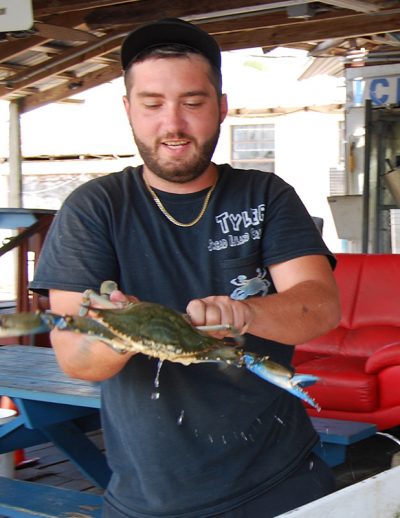 If you were driving quickly from Palmetto on the mainland to Snead Island across the humpback bridge, you would not even notice the Snead Island Crab & Fish House just to the right.

But if you were on a boat heading north through the Snead Island Cut from the Manatee River to Terra Ceia Bay, the weather-beaten structures housing the landmark business would draw you toward its docks.

“I sit on the dock and more than 500 boats go by (on a weekend day),” said Tyler Trudeau, 26, who for the past four years managed the business with his mother, Susie Trudeau.

“It’s so peaceful and relaxing,” Tyler Trudeau said. “A lot of people come and buy a beer and just hang out.

“This is old Florida,” he said.

A fish market has been at that location, at 4104 13th St. Court W., since at least 1930, according to Sneads Island, Then and Now: The Early History of the Settlers of Sneads Island, a self-published book by Kathryn Vassel Kermode.

Through the years, the business went through several owners before Trudeau’s grandfather, Clyde McInnis, purchased it in 1970, wrote Kermode, a life-long resident of Palmetto, now deceased.

“It was a crab processing plant when my grandfather bought it,” Trudeau said. “They would ship cooked and processed crabs all over the country.”

Fishing tackle, bait, beer, soft drinks, and sundries also are sold out of the tiny retail area in the building.

“I sell a lot of bait on the weekends,” said Trudeau, referring to the many sports fishermen who stop in after leaving the Bradenton Yacht Club, just across 13th Street West from the fish house, and take the Cut to Terra Ceia Bay.

Trudeau has been working at the fish house since he was a boy.

“I was raised in the business,” he said.

His grandfather, Trudeau said, taught him everything he knows about running the business.

“He was a great businessman,” he said. “He was really old school.

“And he didn’t take any crap from nobody,” Trudeau said. 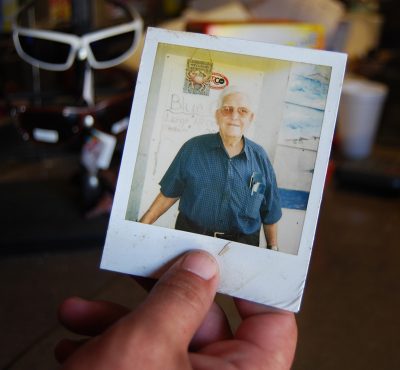 Tyler Trudeau holds a photo of his grandfather, Clyde McInnis, who purchased the Snead Island Crab & Fish House in 1970 and taught Trudeau the business.

McInnis, who died in 2014 at 99, may have been old school but he did study business at University of Miami.

The North Carolina native also owned a fish house in Chiefland and other investment properties throughout Florida and North Carolina.

“He decided to wholesale what local fishermen would catch,” Trudeau said.

Trudeau works at the fish house seven days a week — on weekends from 8 a.m. to 6 p.m.

But you do not hear any complaints from the Palmetto High School graduate.

“Why would I want to do something else?” he said. “I’m living the dream.

“It’s like paradise,” Trudeau said. “I can walk out on the dock and look at the water any time I want to.”

Another reason he enjoys working at the fish house is the people who stop by.

“You see all kinds from all walks of life,” Trudeau said. “And because the family has been here so long everyone knows each other.

“If someone comes in to buy a bottle of Coke and I say it’s $2, they might tell me they can get it for $1.50 down the street. I’ll tell them to go down the street,” he said. “I’m a convenience for them, not Walmart.”

He said it is hard at times to own a business, having to compete with the big-box stores.

“But we can provide services Walmart can’t,” Trudeau said.

At the Snead Island Crab & Fish House you get personalized service.

“I can always get any kind of seafood that anyone wants from my distributor,” he said. “They just have to let me know.”

Even though times may be tough, the father of three has plans for the future.

“In October, there will be some changes,” Trudeau said. “People can come and hang out, drink a couple of beers, eat a hamburger.

These changes will fulfill his mother’s dreams.

Susie Trudeau started a GoFundMe campaign on the internet asking for help in financing the improvements needed at the Snead Island Crab & Fish House.

“My dad always wanted to expand the business as well as to be able to serve the hungry fishermen and women that came by,” she wrote in the introduction on the fund-raising website.

“We must reach out to our friends, neighbors and customers to help raise the funds needed to bring the Crab House back to what it’s been in the past and to keep the business and the way of life my father entrusted to me up and running,” Susie explained.

She writes about how the fish house has become a local landmark and remained the same even as other commercial businesses and housing developments sprung up around it. 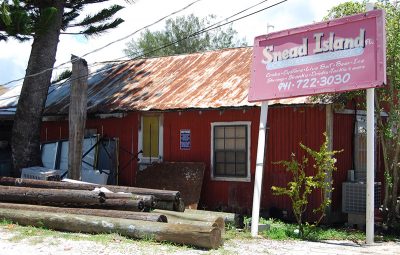 Many of the houses on Snead Island are on one-acre lots or larger, so it is not very densely populated.

And the Manatee County Emerson Point Preserve along with state-owned lands cover about half of the island and are protected from future development.

The early settlers on the island were farmers and fishermen, and there continues to be some agricultural activity.

Being on the mouth of the Manatee River also made the island a great location of marine businesses. One of the earliest was the Pillsbury Boat Works, which is now the Snead Island Boat Works.

Marlow Marine Sales, located next door to Snead Island Crab & Fish House, has been in business since 1965.

Tyler said during his time off he enjoys spending time with his three daughters, Bailey, 7, and twins, Ava and Oliveah, 3.

And when not with them, he is fishing with friends and relaxing.

Trudeau also said he has confidence he will make the business successful through the hard work ethic he learned from his grandfather, and the loyal customer base.

“People know about us by word of mouth,” he said. “My granddad would say, ‘We’ve had crabs for 40 years, and people know we still got ‘em’.”

That is a quote that should be on a T-shirts — and it is.

For more information about the Snead Island Crab & Fish House call 941-722-3030 or visit their Facebook page at tinyurl.com/observer-snead.

For more information about the GoFundMe campaign go to www.gofundme.com/Crabhouse-repair.