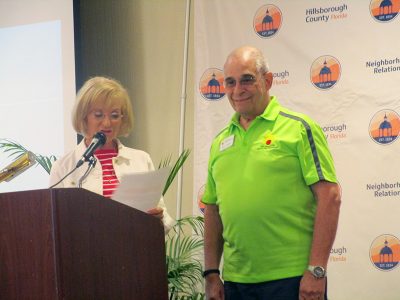 In Sun City Center, it is quite a task to single out individuals who are making significant community contributions. Hillsborough County has done just that, however, by honoring Sam Sudman with its Neighborhood Outstanding Volunteer Leadership Award. Hillsborough County Commissioner Sandy Murman presented the award to Sudman July 15 at the 2017 Neighborhoods Conference at the Sheraton Tampa East in Tampa.

Several directors and members of the SCC Community Association were on hand to show support as Murman read Sudman’s activities on which the award was based. They included his service on the CA’s volunteer board for seven years and serving as the board’s liaison to Hillsborough County. In that capacity, he has formed valuable relationships with county and state officials and has worked tirelessly to resolve residents’ concerns such as traffic congestion and code violations. He has coordinated numerous meetings to bring together the CA board and government officials on projects such as grants for median improvements.

“It is humbling to be singled out for this recognition by the officials I have worked with on behalf of our community and its residents. Volunteerism is a team endeavor, and this award is accepted on their behalf,” said Sudman.

Those acquainted with Sudman know that his activities extend well beyond CA director duties. He volunteers at the Emergency Squad (dispatcher) and Security Patrol (driver and assistant team captain), delivers Meals on Wheels, is president of his homeowners association, treasurer of the Ohio Club and serves on several Sun City Center and Kings Point civic committees. He and his wife Joanne co-chaired the Community Association’s July 4th and Holiday Walk breakfasts for five years (2012 – 2016), and he is a past treasurer for the SCC Community Foundation.

Community Association President John Luper said, “It was a great pleasure watching Sam accept this award. As one of this community’s many outstanding volunteers, Sam has clearly distinguished himself as the go-to guy regarding governmental affairs. We are truly fortunate to have his devoted and consistent efforts on our behalf. This award is richly deserved.” 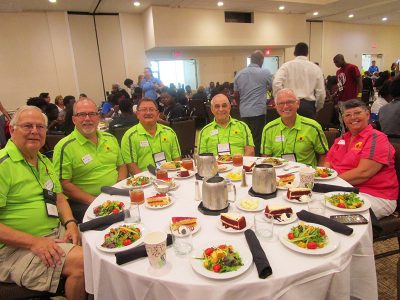 The annual conference is organized by the Office of Neighborhood Relations, which acts as a liaison between neighborhoods and Hillsborough County government and helps residents enhance and strengthen their communities. The multi-generational event is held to further its mission to provide educational, training and networking opportunities. It featured numerous workshops such as Code Enforcement, Effective Meetings for Neighborhood Organizations, Landscape Maintenance Specifications/Agreement, Grant Writing and Beautifying Your Neighborhood. The halls were filled with representatives from area businesses and county agencies offering information about their services.

Chamber View: To buy or not to buy is the question

At Ruskin Moose Lodge, community turns out for the sight and sake of a child