Snooty the Manatee has died 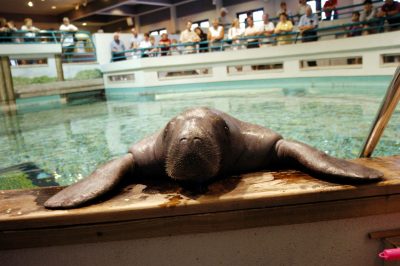 Snooty the Manatee, for decades and for generations a unique and much-loved celebrity in Manatee County, and thought to the be the world’s oldest manatee in captivity, has died. Widespread reports are calling the death a “heartbreaking accident,” involving an underwater access plate that is normally bolted shut. An investigation into his death is ongoing. Snooty arrived in Manatee County in 1949. He is reported to have passed away on Sunday.

In a county-wide event, Snooty celebrated his 69th birthday on Friday and Saturday. This is the report filed from the event:

Hundreds of people showed up at the South Florida Museum in downtown Bradenton on Saturday to sing Happy Birthday to Snooty the manatee on his 69th birthday.

Snooty was born July 21, 1948, in a Miami aquarium and moved to Manatee County when he was less than a year old. He has become an ambassador for wildlife conservation. 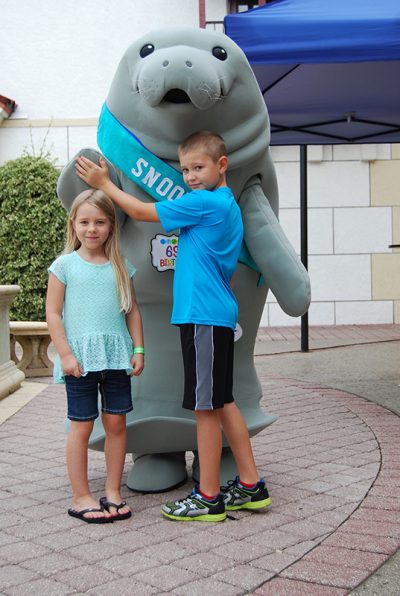 Kyla Niec, 6, and Avery Niec, 7, greet the new Snooty mascot at the Snooty Birthday Bash and Wildlife Festival held at the South Florida Museum on Saturday. Foster Swartz, 18, was recently picked to play the affable sea mammal for events such as Snooty’s 69th birthday celebration.
“This is the greatest honor of my life,” Swartz said of his new position, “because I get to bring joy to the community, hone my acting skills, and educate people about Snooty.” CARL MARIO NUDI PHOTO

The community started celebrating Snooty’s birthday when he turned 20 in 1968, and it has been an annual event ever since.

Other groups, such as the Bradenton Marauders, the hometown Pittsburgh Pirates High A Minor League team, also were there to help the community celebrate Snooty’s big day.

This report will be updated as events warrant.

The following is a press release from the South Florida Museum:

July 21, 1948 Snooty is born on The Prinz Valdemar, a Danish warship that capsized in the Miami harbor in 1926 and later became a floating restaurant and the Miami Aquarium Tackle Company.
1949 ‘Baby Snoots’ comes to Bradenton for the Desoto Celebration and later makes his permanent home in an exhibit inside The South Florida Museum’s area at the Chamber of Commerce Pier Building.
1966 Snooty moves to the newly constructed South Florida Museum.
1979 Manatee County Commissioners declare Snooty to be the County’s official mascot.
1982 Snooty gains even wider fame when the children’s television show, Captain Kangaroo, films him as part of a documentary on manatees.
1985 A hydrophone placed in Snooty’s tank reveals for the first time the high-pitched squeaks as Snooty’s vocalization.
1987 Snooty begins training to aid researchers trying to determine how well manatees hear at different frequencies.
1993 Snooty moves into his newest home: a 60,000-gallon exhibit in the newly constructed Parker Manatee Aquarium.
1998 TheParker Manatee Aquarium joins the Manatee Rehabilitation Network and is introduced to his first tank mate, Newton. During his life, Snooty hosted 33 rehabilitating manatees.
2008 Snooty celebrates his 60th birthday at his annual Birthday Bash and Wildlife Festival. His life history makes him one of the most renowned stewards for endangered species and the environment.
2013 More than 6,000 guests visit the South Florida Museum to celebrate Snooty’s historic 65th birthday — the largest crowd the museum has ever seen and a testament to Snooty’s popularity in the community and beyond.
2015 Snooty is officially certified as the world’s oldest captive manatee by Guinness World Records.
2017 Snooty celebrates his 69th birthday.
Dear South Florida Museum Community,
It is with much sadness that I write today to share the heartbreaking news that our beloved Snooty the manatee has died.

Snooty was such a unique animal and
he had so much personality that people couldn’t help but be drawn to him. As you can imagine, I — and our staff, volunteers and board members — considered him a star and we all deeply mourn his passing.

He brought joy to many lives and contributed to what the world currently knows and thinks about manatees.

Our initial investigation indicates that Snooty’s death was a heartbreaking accident. He was found in an underwater area only used to access plumbing for the exhibit life support system.  Early indications are that an access panel door that is kept bolted shut was dislodged and that Snooty was able to swim in, but there was insufficient space for him to turn around. We’re reviewing what happened and will be continuing to look into the circumstances surrounding his death.

Snooty’s habitat undergoes a daily visual inspection and there were no indications the previous day that anything was amiss. The other three manatees undergoing rehabilitation in Snooty’s habitat — Randall, Baca and Gale — are all fine.

Snooty was born on July 21, 1948, at the Miami Aquarium and Tackle Company — the first recorded birth of a manatee in human care. He moved to Bradenton in 1949. “Baby Snoots,” as he was then known, was brought to Bradenton as part of the 1949 Desoto Celebration and later that year he moved permanently to the South Florida Museum’s care. In 1979, he became Manatee County’s official mascot.

During his lifetime, he greeted up to two million visitors at the Museum and on the Snooty Cam and we are honored to have had him with us for so long. We will continue his legacy through our manatee rehabilitation program.

I know you share in my profound sadness over Snooty’s passing. We will soon share information about plans for a special memorial to honor his legacy and hope that you will share your thoughts and memories of Snooty on our Facebook page.