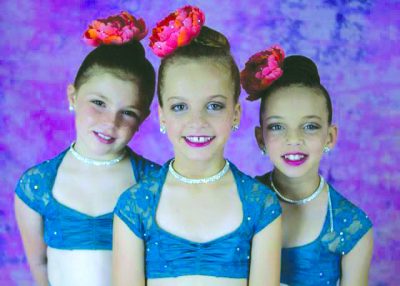 Abigail McNulty, 10, Hayden Schmidt, 9, and Destiny Connolly, 9 and a half, (she emphasized the half), placed second in the 11-and-under duo/trio jazz category at the Fusion National Dance Competitions held June 22 through 25 in Daytona Beach, Fla. with a routine danced to the music of “I’m Better When I’m Dancin’.”

“I was super excited about coming in second,” said Abigail, whose friends call Abi. “I was glad we were able to do it because we were one of the youngest (teams) to make into showcase.”

Showcase is the regional competition category needed to go to the nationals.

Tracy Stratman, owner and director of the studio, said the girls worked hard and deserved their trophy.

Abi, Hayden and Destiny qualified for the national competition at the regional level contest with a high-gold placing, which is above gold, but just under platinum.

The success of the three young dancers was not a surprise to Stratman.

“They attended four regional competitions this season, and they placed with gold and high gold,” Stratman said. “They also placed several times in the overalls.”

The instructor and coach of the three girls, Sarah Johnson, said they deserved their trophy.

“I was pretty excited the girls won,” said Johnson, who has been a dance instructor for 11 years. “But they worked their butts off and deserve this award.” 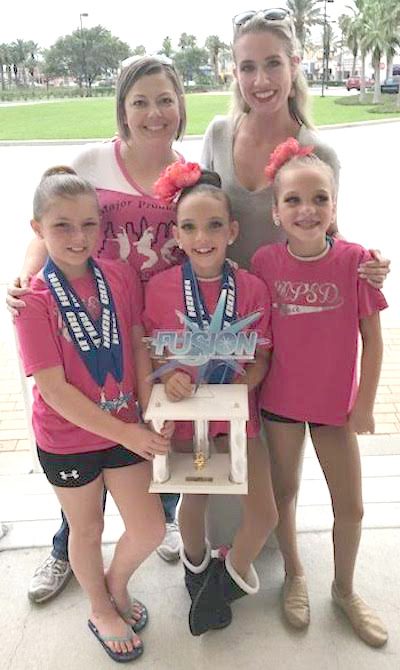 For Abi, Hayden and Destiny, dancing and competition are important.

“My favorite thing about dance is practice and on stage I can just let out all my feelings and be me,” Hayden wrote in an email from Indiana.

“I dance because it is what I love,” she said.

Destiny said she enjoyed the national competition in Daytona Beach.

“I was kind of nervous, but at the same time confidant and excited,” she said. “Then after winning I felt really happy.

“We were jumping up and down because we were the youngest and only team (from Master Productions to win at the nationals),” Destiny said.

And their families also celebrated in the trio’s accomplishment.

“She’s a natural and has a love for dancing,” Connelly said.

And Abi’s mother, Brandi McNulty, had praise for the team’s hard work.

“It’s one thing to dance as an individual,” McNulty said, “but to work together as a team — they love it.

“We so proud of them,” she said. “They put a lot of long hours in the studio and have grown a lot this year.”

A February 2014 article by Rebecca Lake on the Live Strong website talked about the benefits of dance instruction in developing young dancers.

“Ballet promotes physical strength and agility, can boost concentration, develops an understanding of music and rhythm and generates a love of movement,” Lake wrote.

These are all the character-building lessons Stratman wanted to promote when she started teaching dance 22 years ago.

She started dancing herself when her mother enrolled her at 18 months old in her first class.

“Owning a dance studio always was my dream,” Stratman said.

She owned a dance studio in Indiana for eight years, but closed that studio when her children were toddlers.

Stratman then heard that the woman running the after-school dance program in Manatee and Sarasota counties was giving it up, so she moved to Bradenton to take it over in September 2012.

She was away from her husband, Sam Stratman, and two children, Kylie, now 14, and Hayden, 11, for a year, making several trips home to Indiana on weekends before the family joined her in Manatee County.

After about four years running the after-school dance program, she decided to open her own studio again in January 2016. 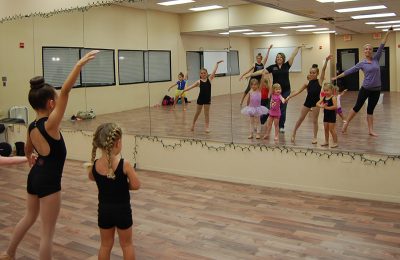 “I wanted to do more,” Stratman, 36, said. “You can only do so much with after-school programs.

“I wanted to have competition teams and to build a community of dancers and parents,” she said.

This ended up being the right decision.

In more than a year and a half, the dance school has hired five teachers and expanded into a second studio in the ice complex for two days a week.

“And soon we will be using the additional space four days a week,” Stratman said.

Last year the studio had between 35 and 40 classes per week, with each class lasting 45 minutes.

Several dance genres are taught more than once a week depending on the age group of the students.

“Our most popular program is our tutu cute toddler program,” Stratman said. “We had 50, 2 and 3 year olds in five different classes.”

The studio class season lasts from August through June so they will be gearing up for next year’s competition circuit.

“We (held) our competition dance team auditions on July 13,” Stratman said. “We will be bringing in new dancers and creating new dance routines, and begin competing again in February.”

In the 2015-16 competition season, the school’s acrobat duet team placed first overall, and in the 2016-17 season it had the runner-up for the national champion in the Fusion Stars Showcase.

Besides preparing champions, Major Productions Studio of Dance holds an annual dance recital in June where all of the dance students participate.

For more information on Major Productions Studio of Dance, call 941-586-6238 or visit its website at www.majorproductionsstudioofdance.com.