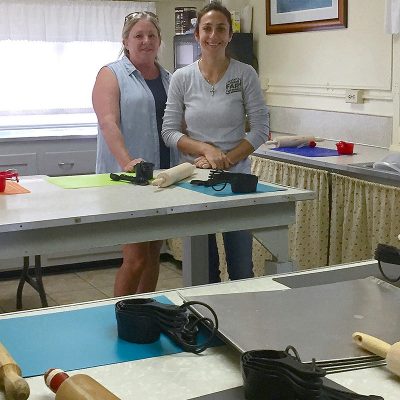 Susan Bishop, left, and Renee Raley, of A Simpler Place Farm & Market in Riverview, get ready to teach a class on bread baking for a recent fundraising event at the GFWC Ruskin Woman’s Club. The effort raised $300 for the club’s annual scholarship fund. GRACE MCKEE PHOTOS

After Grace McKee recently took part in a bread-baking class offered by A Simpler Place Farm & Market in Riverview, she wanted to offer the same opportunity to fellow members of the General Federation of Women’s Clubs (GFWC), Ruskin Woman’s Club.

“I had so much fun and I knew they would too,” said McKee, the club’s current president. “I felt it would be a great way to raise funds for our annual scholarship fund.”

So the MiraBay resident asked owner Renee Raley and instructor Susan Bishop to take their class on the road and bring it to Ruskin.

“We appreciate the ladies of A Simpler Place Farm & Market graciously bringing their baking class to our kitchen,” McKee said. “Everyone learned so much and had a great time together. And we raised $300, a win-win.”

“I was ready to do and learn something new,” the Wimauma resident said. “I had never baked bread before, and it was a lot of fun. In addition to what we baked in the class, we got to take raw dough for two loaves home, and my granddaughters baked it the next day. It was a new experience for all of us.”

Raley and Bishop, her employee, had been talking about preparing baked goods, breads and sweets at A Simpler Place Farm & Market.

“I’ve been working on a recipe for some time now, and Rene wanted to offer a class,” Bishop said. “We held the first one in April and have offered one every month since. The Ruskin Woman’s Club class was my biggest class ever,” she said, noting she typically has eight participants. 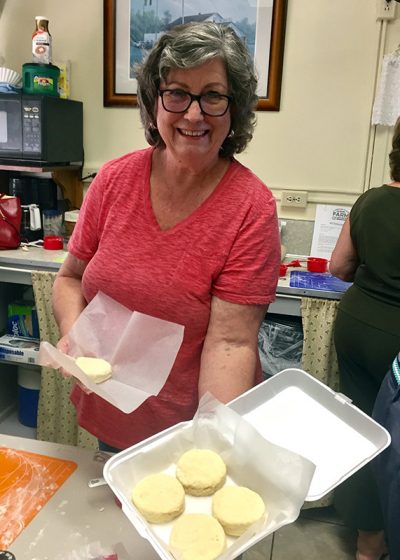 Each participant baked a loaf of sourdough bread at the club’s historic clubhouse, 503 U.S. 41 S., and “took home two more loaves and six buttermilk biscuits ready for the oven, along with recipes and instructions,” McKee said.

The GFWC Ruskin Woman’s Club membership meetings are currently on summer hiatus and won’t officially resume until 2 p.m. the first Wednesday in September. But that doesn’t mean things aren’t going on behind the scenes.

“So far this summer, we’ve had our planning meeting followed by the sale of our business card advertisements on our website and in our newsletters,” McKee said. “These ads were sold by new member Robin Rae Alvarez of Rae’s Accounting, who has raised over $1,000 for scholarships.

In addition to the baking class, which took place July 13, two other summer events are planned to offer members and their friends an opportunity to shop and socialize.

Both events are open to the public, and proceeds will benefit the club’s scholarship fund and community service efforts.

The GFWC Ruskin Woman’s Club is also actively supporting one of its members who is running for honorary mayor of Sun City Center and will be raising part of her funds for the club, “more specifically Hacienda Girls Ranch for girls transitioning from foster care to the work world,” McKee said.

Candidates for the race will be announced at the Sun City Center Area Chamber’s Schmoozapalooza at the Firehouse Cultural Center Aug. 24.

“We are off and running for an outstanding club year,” McKee continued. “Our summer activities will raise about $2,000 for scholarships and community service before our club year officially begins.” 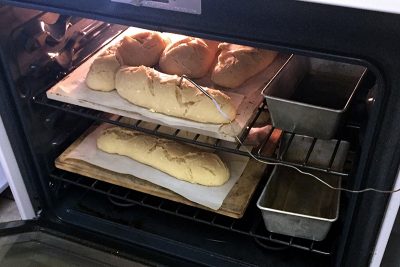 Part of the baking class involved baking sourdough bread on site at the Ruskin Woman’s Club’s historic clubhouse using a sourdough starter of wild yeast from the farm site, organic flour and salt. They also made fresh buttermilk biscuit dough.

Other upcoming fundraisers include an Oct. 14 Bling Market, being organized by club members Barb Diana and Anne Frappier. Interested vendors may contact either at gfwcrwc@gmail.com.

And another member, Shawn Geitner, owner of Beleave Teas, Inc., is chairing the club’s annual Christmas Tea planned for Dec. 2.

Guests are always welcome at the GFWC Ruskin Woman’s Club monthly meetings September through May. To learn more, visit www.gfwcruskinwomansclub.org or the club’s Facebook page.

A Simpler Place Farm & Market is at 9903 Carr Road, Riverview. To learn more, go to www.asimplerplace.com or visit them at www.facebook.com/aSimplerPlaceInTime/.