Ruskin was once known as the the salad bowl of America. Ruskin tomatoes and lots of stuff grew here. Some of it remains, but not like it was. With every passing day all of South Hillsborough and North Manatee are further being absorbed into the nation’s 18th largest metropolitan statistical area (OK, it’s already a part of it, it just never really seemed like it. Back in the 90s, there were two tack stores in town…just in case you needed a saddle or something).

On the plus side, there are still plenty of places around to get farm fresh vegetables. A new one — or, rather, a newly re-opened one — is the Big Red Barn in Riverview. Check out Lois Kindle’s article about it in this week’s Observer News.

Today’s weather:  Today is a new day! From the National Weather Service Office in Ruskin:

“Showers and thunderstorms likely, mainly after 3pm. Partly sunny, with a high near 90. Heat index values as high as 101. Light and variable wind becoming west 5 to 7 mph in the afternoon. Chance of precipitation is 60%. New rainfall amounts between a tenth and quarter of an inch, except higher amounts possible in thunderstorms.”

During the evening and overnight hours, showers and thunderstorms likely, mainly before 9 p.m. and a low around…..you got it!…. 76.

Eye on the tropics: Yay! The tropics appear to be moving towards a chill out phase. From the National Hurricane Center:

Highly esteemed Ruskin artist Bruce Marsh will be speaking about his exhibit at the Tampa Museum of Art at 12:30 p.m. today. Visit: https://tampamuseum.org/museum-events/event-list/?ee=1263

At the SouthShore Regional Library,  the Wonders of Nature Wildlife Show will take place at 1 and 2:30 p.m. It’s a live wildlife show that combines humor and audience participation to deliver lessons on conservation. For grades K-5.

At 6 p.m. is Augmented Reality With Your Smartphone. Alas, it is full. Sounds cool but should this particular reality actually be augmented???

Also….Did you realize that electronic book sales are flattening out? Either people aren’t reading as much or they are using real books. Let’s prove the latter (), shall we? Check out a book! It’s free, but you have to bring it back.

Loads o’ stuff happening at the Entrepreneur Collaborative Center. So much that it would be best to click on the calendar link below. But this makes for a good time to mention the address: 2101 E. Palm Ave. That’s more or less just up the road in Ybor City.

From the looks of it, yesterday was a big day at the Board of County Commissioners meeting. Did you go?

There is a “Red Light Camera Hearing” from 2 to 5 p.m. at the County Administrative Center, 1112 Manatee Ave W. in Bradenton. Just for the sake of clarity, red lights really do mean “stop.” Yes, I’m talking to a few dozen (hundred) people who appear to not be aware of that small detail while crossing College Ave. / 674 in Ruskin.

The print edition of The North Manatee Observer News also contains numerous things to get you out of the house and into the beauty of Manatee County.

Print is way cool. The Observer News website contains only a small portion of what is in the print editions (yes, there are four editions!). Pick one up. We’re everywhere. Mostly. 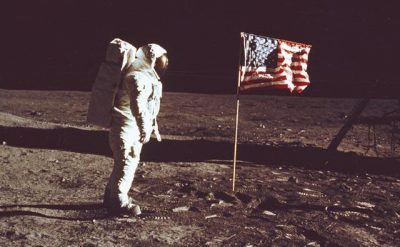 U.S. Astronaut Buzz Aldrin on the surface of the moon. NASA PHOTO

America rightly supports our troops these days. We ask young men and women to put their lives on the line in some unknown country and they follow, in the end, our orders. Well, we didn’t always treat returning Vietnam vets all that well back in the 60s and 70s (although that has changed today). And there was that time when Washington, D.C. Police teargassed World War I veterans.

On this day in 1932, the “Bonus Expeditionary Force” were attempting to march to the White House. Roughly 17,000 WWI veterans and their families gathered in D.C. to demand payment for their service certificates. With the Great Depression firmly in place, many of the veterans had been out of work and a Congressional act in 1924 had awarded them cash compensation….not redeemable until 1945. But hey! It included interest. In the end, tanks and teargas were involved and two veterans were killed. They were driven out by force.

And just a note: that was not the first time that military veterans marched on the nation’s capital. In 1783 hundreds of Revolutionary War veterans in Pennsylvania marched on the then-capital in Philadelphia, surrounded the State House where the U.S. Congress was in session and demanded back pay. Congress fled to New Jersey and the U.S. Army eventually expelled the veterans.

If nothing else, we’re a colorful bunch. And we always have been.

On this day in 1976, NASA’s Viking 1 successfully landed on Mars, marking the first time a spacecraft landed on another planet and became operational. The trip took 10 months. The landing was planned for July 4, 1976 — the Bicentennial of the United States — but it was discovered the original landing site was not ideal and a safer place was found, delaying the landing. Viking 1 continued working for 2,307 days — a planetary record only eclipsed by the much higher tech Opportunity rover on May 19, 2010.

On this day in 1969, the crew of Apollo 11 successfully made the first manned landing on the moon, in an area known as the Sea of Tranquility. American astronauts Neil Armstrong and Buzz Aldrin became the first humans to walk on the moon. The United States remains the only nation on Earth to have landed humans on the moon.

And, in the end… “One small step for man, one giant leap for mankind.” — Astronaut Neil Armstrong.

Those were the first, now immortal words, from a man standing on the surface of the moon. But it was Buzz Aldrin who actually spoke the first words from a place not on earth: “Contact light,” he reported to NASA upon landing. Six hours later, Neil Armstrong became the first man on the moon. He later reported that, “I didn’t feel like a giant. I felt very, very small.” He was commenting about looking back at Earth from the surface of the moon.

Armstrong and Aldrin left a plaque on the moon inscribed with:

“HERE MEN FROM THE PLANET EARTH
FIRST SET FOOT UPON THE MOON
JULY 1969, A.D.
WE CAME IN PEACE FOR ALL MANKIND”

May we continue to accomplish huge things while still feeling small and respectful. May the eventual history of our next human journey into the unknown begin with the words, “Contact light.” May we always arrive in peace. Have a great Thursday. See you tomorrow morning.