With Rotary, it’s all about people — and their communities 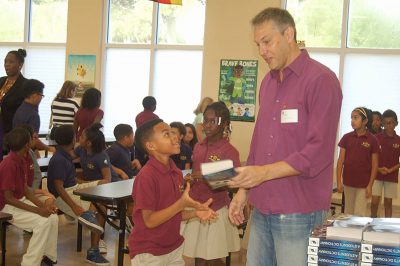 Despite misunderstanding by some in the community, Rotary International and its local affiliates is an organization of philanthropy, not a networking group.  The Rotary Club of FishHawk-Riverview members say they are focusing on just that.

“The reason for Rotary is to help the world,” he said, and that is what the club will target as it moves in to its 16th year – finding new members ready to wrap their arms around their neighbors and lend a hand.

The club marked the anniversary with a soiree at Shrimp Boat recently, attended by 75 to 100 people, cutting a ribbon to officially join the Greater Riverview Chamber of Commerce, then receiving an award from District Governor Joyce Gunter for the community service FishHawk-Riverview Rotary does in its community.

“She basically gave us an award of appreciation for what our club does for the district and for our community in service, donations and work,” said outgoing Club President Christopher Jones.

The club hosts several major events each year to raise money for its charities. The largest is its annual crawfish festival, held each April, most recently at Winthrop.

“In 2009, that was the first group effort between the Riverview Rotary Club and the Rotary Club of FishHawk-Bloomingdale,” Jones said. The event, which was Broussard’s brainchild, was a resounding success and the affair that sealed the merger of the two clubs.

“The economy was down and a lot of bad things were going on back then,” Jones said. “Both groups had lost quite a few members. The merger just made sense,” he said.

Money raised by the local Rotary Club funds several projects, including the Dictionary Project, an effort to purchase dictionaries for every fourth grader in Lithia, Riverview and Valrico – about 1,600. 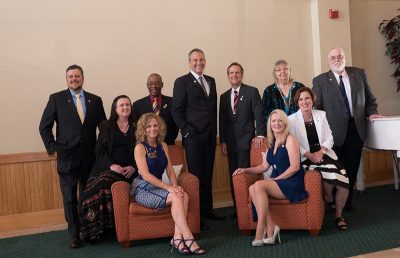 The board of the Rotary Club of FishHawk-Riverview. The focus of the organization, which is highly inclusive of all ages, is philanthropy and community-oriented projects.

These aren’t just regular dictionaries. They also include a thesaurus, the full Declaration of Independence and the Bill of Rights. They each have a periodic table and a list of state birds and state capitals.

“The teachers have told me they literally take the rest of the day off to look through these books,” Jones said. “To have the children that passionate about learning something is just amazing to me.

“We also have the Alafia Lighted Boat Parade,” Jones said. “We do a chili cookoff that goes along with it. Last year we had probably 30 boats up and down the river.

“Part of the designation of Rotary is to help serve your community. So, the other big thing we do is give between $3,000 and $6,000 in scholarships to high-school students going in to college or trade school. The scholarships go to high-achieving students at Newsome, Riverview and Spoto high schools who need financial help.”

Students submit essays and are interviewed by Rotary members. “We do one major award for each school, then pick three to six other candidates,” Jones said.

FishHawk-Riverview Rotary also supports ECHO, which provides clothing and other household items to the needy and the Brandon Outreach Clinic, which provides free medical service to the underprivileged with no insurance. It also assists Buddy Cruises, helping to pay for people with Down’s syndrome and their families to enjoy an ocean cruise.

Last year, the club grew its membership by 15 percent, Jones’ major goal. Broussard said he hopes to continue in that direction, which will enable the club to do even more for the community.

“I want to add some new members, but very strategically,” Broussard said. “I want them to be a fit for the club, goal oriented. A good fit is someone that’s looking to do some charitable work, not necessarily promote their business. Someone who wants to really be there for the community. Promoting your business is a given at Rotary.”

“People sometimes have a skewed vision of Rotary, that it is a networking group,” he said. “We’re like family. When people need stuff they are probably going to come to a fellow Rotary member. But our main intention is more of a philanthropy opportunity.”

To learn more about the club, visit www. fishhawkriverviewrotary.org.