During the 2016 Summer Olympics in Rio de Janeiro, an average of 27.5 million people per day watched the television coverage over the 15 days of broadcasting. That’s a lot of people.

Have you ever considered not watching it and attending it instead? Yeah, that seems hard. But a Sundance couple has been doing just that — and running their own marathon of sorts. Pick up this week’s Observer News to find out more.

Today’s weather: Break out those flip flops! From the National Weather Service Office in Ruskin:

“Scattered showers and thunderstorms after 2pm. Mostly cloudy, with a high near 92. Heat index values as high as 100. East wind 5 to 7 mph. Chance of precipitation is 40%.”

Overnight? Yessirree…scattered showers and thunderstorms and a low of 76.

Personal forecast: It’s summer. It’s hot, it’s humid. So let’s continue with another Florida quote: “I live in Florida and people are crazy here. And I say that lovingly.” — actress Amy Seimetz

Eye on the tropics: Things can get a little crazy in the tropics, too. But right now, things are pretty chill. Enjoy it! From the National Hurricane Center:

At the SouthShore Regional Library this morning, starting at 10 a.m., there is “Baby Time,” “Toddler Time” and “Story Time.” And yes, they did it yesterday, too. No, I didn’t re-type it for today. Yes, babies, toddlers and youngsters like their time and they like stories, too.

At 4 p.m. at the library is “Recording Studio Open Orientation.” Check it out to get an overview of the equipment and software available and learn how you can reserve time in the studio.

Competing in that same time slot are: Needle People! (That could be interesting).

Finally, at 6:30 p.m. will be Adult/Teen Introduction to Portrait Drawing with famed local artist Michael Parker. The class is for those 16 years of age and older and is limited to 22 students. Call 813-273-3652 to register or for information.

There are a good number of public meetings and events today in Hillsborough. Check them out here: http://www.hillsboroughcounty.org/en/calendar

If you have some time on your hands, the county is making available some reading material on our drinking water (and water usage in general). Find it here: http://hcflgov.net/library/hillsborough/media-center/documents/water-quality-reports/2016/pu_sc-water-quality-annual-report-2016final.pdf

This should come as no surprise but most Hillsborough County offices will be closed for Independence Day on Tuesday, July 4. But do know that there will be no garbage or recycling collection that day in unincorporated parts of the county (that be us). On the plus side, county conservation parks and dog parks will be open.

It’s Wednesday and you know what that means in Manatee County! Yep, it’s “Before You Tie The Knot” day from 6 to 8:30 p.m. I truly think it is great that a local government is investing in helping people to live better lives. It’s supposed to be fun and it is definitely free. At the Manatee County Agriculture and Extension Service, 1303 17th St. W., Palmetto.

It is almost July: Manatee County Parks is gearing up for summer with numerous programs for kids and adults in the month of July. For an event listing (the actual calendar may or may not be updated so scroll down) visit: http://www.mymanatee.org/home/government/departments/parks-and-recreation/natural-resources/nrd-headlines/edu-program.html

On this day in history, World War I both began and ended.

On this day in 1914, Archduke Franz Ferdinand of Austria and his wife Sophie were assassinated in Sarajevo (future home of the Olympics, some war of their own and some genocide). That is thought to be the act that kicked off the war.

And…on this day in 1919, the Treaty of Versailles was signed, bringing an end to World War I, the “war to end all wars.” War is ugly no matter where or when but that was like nothing anyone had ever seen before: more than eight million people lost their lives. 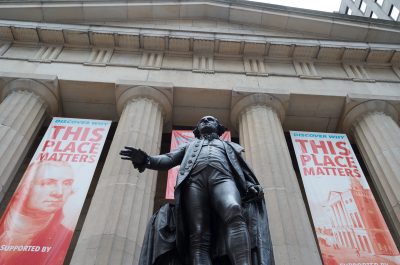 New York is a city of “firsts”. The first Gay Pride Parade in 1970 and also the location of the first inaugural address ever by a United States President: George Washington at Federal Hall in Lower Manhattan. MITCH TRAPHAGEN PHOTO

Speaking of beginnings: Most of you have seen coverage of the Pride Parades held in St. Pete and around the nation last weekend. Here is some backstory:

It was on this day in 1969 that the Stonewall riots began in New York City, which is largely believed to be the start of the Gay Rights Movement. The Stonewall Inn in Greenwich Village of Manhattan was among the few clubs to accept openly gay patrons in those days. It also happened to be (reportedly) owned by the Mafia at the time. Also at that time, NYPD raids on gay establishments were fairly routine — but they weren’t ready for the patrons of the Stonewall Inn. Officers lost control of the situation in a hurry. The city adapted fairly quickly, all things considered — although not everyone agrees to this day (hey, it’s no surprise that we don’t all agree on things — and that’s what makes us colorful! And it’s occasionally why we have a Supreme Court).

Regardless, the first Gay Pride March was held in New York exactly one year later, on this day in 1970. And today they are held annually around the world.