Editors note: A story I promised about a 7-year-old girl requires a bit more editorial review. Regardless, I have no doubt there are many 7-year-olds out there who can and will inspire you. Stay tuned, as it were…

“Scattered showers and thunderstorms after 11am. Partly sunny, with a high near 90. Heat index values as high as 99. Light and variable wind becoming west northwest 6 to 11 mph in the afternoon. Chance of precipitation is 50%. New rainfall amounts between a tenth and quarter of an inch, except higher amounts possible in thunderstorms.”

Overnight? Mostly cloudy with a low around 75.

Personal forecast: Regarding Florida: “This is everything I thought I didn’t want. Or didn’t need. But I’m here now and it’s everything I need and the only thing I want.” ― Tamara Lush, “Hot Shade”

Eye on the tropics: Count your blessings people by the sea…there’s a little something out there but we’re still looking good. From the National Hurricane Center:

At the SouthShore Regional Library this morning, starting at 10 a.m., there is “Baby Time,” “Toddler Time” and “Story Time.”

Something new at the library: at 2 p.m., members of the Bay Area Greyhound Rescue will talk about what it’s like to rescue and foster greyhounds. There will also be discussion of the adoption process and of biped responsibilities and quadruped needs. Oh — and you’ll have the chance to meet a few greyhounds. How cool is that?

Also at 2 p.m. is Introduction to Social Media, providing the basics of Facebook, Instagram, Snapchat and Twitter. The class is limited to 12 people. If you go, can you explain Snapchat to me, please?

Finally at 6 p.m. will be the Anime Club for young people, grades 6 to 12, offering screening and talk about the latest and greatest in the “world of anime and manga.”

If you attended last night’s town hall meeting in Ruskin on transportation, I’d love to hear from  you. Just click here to share your thoughts.

You’ll have to hurry but for budding entrepreneurs, the county is offering a great — and free — class: Business Plan In A Day. When it comes to starting a small business, or even a large one, there are few things more important. The class will be held at 5508 N. 50th St. in Tampa. Visit: http://www.hillsboroughcounty.org/en/calendar/02-business/2017/20170627-business-plan-in-a-day

The Commission on the Status of Women meets at 11:15 a.m. at County Center in downtown Tampa. Visit: http://www.hillsboroughcounty.org/en/calendar/05-publicmeetings/2017/20170627-cosw-meeting

Another free event runs from 5:30 to 7:30 p.m. at the Entrepreneur Collaborative Center in Tampa: Top 7 Legal Issues for Start-Ups. Visit: http://www.hillsboroughcounty.org/en/calendar/02-business/2017/20170627-top-7-legal-issues-for-start-ups

It is almost July: Manatee County Parks is gearing up for summer with numerous programs for kids and adults in the month of July. For an event listing (the actual calendar may or may not be updated so scroll down) visit: http://www.mymanatee.org/home/government/departments/parks-and-recreation/natural-resources/nrd-headlines/edu-program.html

For today, the Manatee County calendar says…el zippo. But stuff is coming up. The calendar is located here: https://www.mymanatee.org/home/county-calendar.html 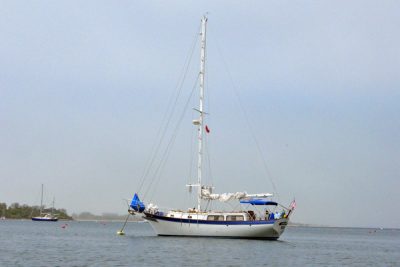 My own sailboat, Shadow Marie, at anchor at Block Island, Rhode Island.

Tampa Bay and the Gulf Coast are considered among the finest sailing grounds in the world. Both can charm or challenge, often with one occurring within mere hours of the other. To get an idea of the popularity, just drive out to Little Harbor, Shell Point, or the marinas at the end of Apollo Beach Blvd. Humans have sailed for the millennia. While things have changed, the winds and the waters haven’t. OK, well they have but sails and sailboats still work.

On this day in 1898, Joshua Slocum completed the first solo circumnavigation of the globe after departing from Briar Island, Nova Scotia aboard his modified sailboat, Spray. Although born in Nova Scotia, he became a naturalized American citizen. While known for his adventures, he possessed a hilarious dry wit and an extraordinary wisdom, along with a fantastic way of putting it all into words.

Unlike today, there weren’t a lot of cruising sailors in 1898. Slocum pretty much set the standard for the many who still follow in his wake. Of all those boats with masts in our area marinas, many have Jimmy Buffett tunes at the ready and nearly all of the sailors were influenced by Joshua Slocum. Today even the smallest cruising boats have electronic navigation using GPS and computers, many have radar, refrigeration and water makers along with solar panels and wind generators to provide power while disconnected from the grid. We have cell phones, emergency distress beacons, radios capable of transmitting worldwide, AIS (which identifies you and other vessels, like big ships that could run you over without noticing otherwise) and electronic depth sounders. Even offshore, we have 24/7 access to weather forecasts and e-mail.

Slocum had none of that. But….he did have thumbtacks.

While anchored in an area in which he suspected some pretty hostile people might be ashore, he spread thumbtacks all over his deck.

“Now, it is well known that one cannot step on a tack without saying something about it,” he wrote.

As much today as in Slocum’s time, a dingy (a small boat to get to shore from the the larger, anchored boat) is among the most important things a cruising sailor has. Slocum once almost lost his — as it drifted away, he dove in after it:

“I grasped her gunwale and held on as she turned bottom up, and I suddenly remembered that I could not swim.”

A few other good words and phrases from Mr. Slocum:

“Remember, Lord, my ship is small and thy sea is so wide!”

“The days pass happily with me wherever my ship sails.”

And, perhaps, most importantly for some:

“To young men contemplating a voyage, I would say go.”

Upon completion of his circumnavigation, he gained considerable fame and relative wealth from his book, written in 1900, Sailing Alone Around the World. He once sailed Spray to Theodore Roosevelt’s Long Island estate to entertain the U.S. President with tales of his adventures.

On November 14, 1909, he set sail aboard Spray bound for the Caribbean. He was never seen again. He was legally declared dead in 1924 but his spirit lives on in those decks, masts and sails you see near our water’s edge. He never did learn how to swim because he saw it as pointless since he had a good boat.

His book, Sailing Alone Around The World, is available free as an ebook from Apple’s iTunes or a version with illustrations for 99 cents from Amazon’s Kindle Store. It’s a good read.

And now, sail on young men and women! And have a great day!