I’m sorry to be the one to break this to you this early but…it’s Monday.

On the bright side, it should be a beautiful Monday on the Gulf Coast of Florida. And even if not, try to make it one, OK? There are always blue skies just behind the clouds. And no one does blue skies like Florida.

Also on the plus side, please do know that there are people like Kelly Kowall out there. She turned the unimaginable grief of losing her son into a lifesaving mission for countless veterans. She was recently honored for her efforts by the State of Florida. Read Lois Kindle’s story here:

Today’s weather: It’s summer in the Bay Area. From the National Weather Service Office in Ruskin:

“Scattered showers and thunderstorms, mainly after 2pm. Partly sunny, with a high near 89. Light and variable wind becoming west 6 to 11 mph in the morning. Chance of precipitation is 50%. New rainfall amounts between a tenth and quarter of an inch, except higher amounts possible in thunderstorms.”

Overnight there is a chance of showers and…brace yourself…a forecast low of 74. Get those mittens out!

Personal forecast: Look at it this way: what most of the country calls a “heat wave,” we call summer. You know what to do by now, right? Think sunglasses and an umbrella.

Eye on the tropics: On the Pacific side, they are dealing with a growing storm named Dora. I don’t think they should name potentially deadly storms Dora. “Spike” or “Rat” seems appropriate. No concerns for the Atlantic side for now, though. From the National Hurricane Center:

It’s just a theory but in Florida, the dog days of summer come early. Things chill in air conditioning until we all go insane with cabin fever about…say, August, when things start to pick up again.

You can scroll back through the Observer Today posts to pretty much see what is happening today around the metro.

At the SouthShore Regional Library, the Adult Writing Group meets at 1 p.m. Everyone is a writer and “inspiration, encouragement and exchanging ideas” are all good things.

There isn’t much that’s more important going on today for South Hillsborough residents, especially those who drive which is…pretty much all of us, than this:

Will it help? Sheesh! Who knows? But you get to say that you tried and that’s worth something.

Manatee County Parks is gearing up for summer with numerous programs for kids and adults in the month of July. For an event listing (the actual calendar may or may not be updated so scroll down) visit: http://www.mymanatee.org/home/government/departments/parks-and-recreation/natural-resources/nrd-headlines/edu-program.html

For today, the Manatee County calendar says…nada. But stuff is coming up. The calendar is located here: https://www.mymanatee.org/home/county-calendar.html 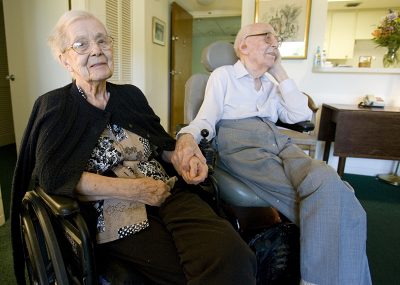 World War I Veteran Harry Landis, 107, at home in Sun City Center. Landis is one of only four known surviving veterans of WWI. Pictured, Eleanor smiles as her husband holds her hand. MITCH TRAPHAGEN PHOTO

On this day in 1963, President John F. Kennedy gave his famous, “Ich bin ein Berliner” speech, near the Berlin Wall, which basically told Soviet-controlled East Germany to back off unless they wanted some serious American hurt put on them. And while there was a wall when the president gave that speech, it’s objective was never actually realized. West Berlin survived just fine. And it only lasted until people tore the stupid thing down with their bare hands beginning on Nov. 9, 1989.

And in 1917, the first U.S. forces arrived for the nightmare known as World War I — the war to end all wars. At least until two decades and a few years later when we were dragged into the next one. Today, there are no living WWI veterans. Thanks to Commander Ed Socha (USN-Ret) and the SCC MOAA, I had the opportunity to meet one of the few remaining, while they were remaining.

In 2007, a group of veterans from Sun City Center paid a visit to Harry Landis, then 107-years-old, living in Sun Towers. His wife, Eleanor, was a spry 99-years-old. Mr. Landis was among the last four WWI veterans alive in the world at that time. He never saw active duty because the war ended before he could be shipped off. Had he gone, he would have been a dough boy, an infantryman among the many. But on that day in 2007, the veterans visiting him, all once military officers, all decorated, stood to formally salute him.

What struck me most about Mr. Landis was what a gentleman he was. And mostly, that he and Eleanor held hands for the entirety of our visit. Seriously, how cool is that? Mr. Landis has since passed away but his spirit remains. Godspeed sir.