Pre-retirement, Palmetto couple finds their own cup of tea 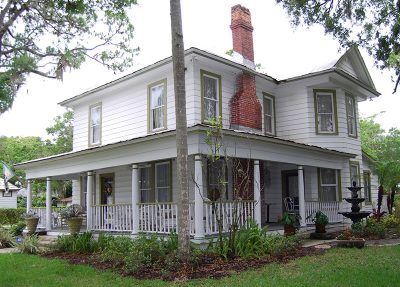 Charms of Leffingwell, 905 Leffingwell Ave., Ellenton, is located in a Victorian home built in 1905. Photos by Carl Mario Nudi

Palmetto residents Judy and Mike Smith were not planning on starting a business before they retired, but when an opportunity presented itself they found their cup of tea and went for it.

The Smiths are owners of Charms of Leffingwell, 905 Leffingwell Ave., Ellenton, a tea room combined with an antique, collectible and gift store.

The business was located in a charming Victorian house built in 1905.

They found out the business and house were for sale when Judy’s sister was looking at some real estate listings and knew Judy had taken a tea class.

“I’m always taking classes and the tea class was just another opportunity to learn something new,” said Judy, who is in her 60s. “I’m into lifelong learning.

“I was thinking of owning a business after retiring in the future,” said Judy.

But they decided to go take a look at Charms.

“My grandparents and parents passed up opportunities,” said Mike, “and we were not going to do that.”

The couple purchased the house and business from the previous owners, Bobbie and Harry McGraw, in November 2015 and after six months of renovations and upgrading, with the help of Judy’s brother, Charms opened in May 2016.

“We painted the walls, sanded and stained all the wooden floors, and upgraded the kitchen,” Judy said.

The McGraws had owned Charms for 15 years and decided it was time to retire.

“I had visited Charms before for tea,” Judy said.

She was always interested in tea and tea services and took the tea class in 2013.

“I became interested in tea services when I inherited a set of teacups. “I carried them all over the States during every move.”

Mike was not a stranger to owning a business. 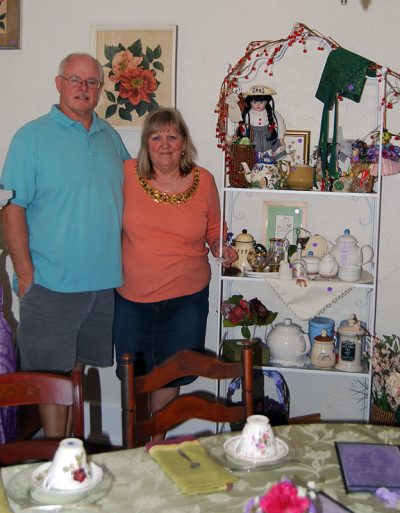 Judy and Mike Smith purchased Charms of Leffingwell, 905 Leffingwell Ave., Ellenton, in November 2015 and after six months of renovations and upgrades opened for business in May 2016.

His family owned a general store in Hazard, Ky. when he was growing up.

For Judy, it was another story.

“I never had a business before and after first buying Charms, I would wake up at night and wonder if we did the right thing,” she said. “But we have to take chances.”

And since opening, each month has seen an improvement to the bottom line, Judy said.

“Our philosophy is that we’re not here to make big money,” said Mike. “It’s for the enjoyment of our customers.”

The couple both work full-time at OneBlood, a not-for-profit blood provider with offices throughout Florida and parts of Georgia.

Judy has worked for OneBlood for 15 years, and is OneBlood’s senior vice president of Quality & Regulatory Affairs.

Mike has been with OneBlood for 13 years, and is manager of a transfusion service office.

They met more than 13 years ago at a year-long class dealing with the blood-bank industry.

They married and created a blended family of Judy’s three sons and a daughter, and Mike’s one daughter.

Judy’s daughter, Audrey, who lives next door to the couple in Palmetto, helps out with the business.

“She maintains our Facebook and website, designs our brochures and fills in at Charms when we need her,” Judy said.

Since the couple both work 40-plus hours a week at OneBlood, they decided to open just on weekends.

“When we do retire, we will open more days,” Judy said.

Until then, Charms of Leffingwell is only opened from 10 a.m. to 3 p.m. on Saturdays and Sundays, or by appointment.

The menu has four levels of tea service.

A pot of freshly steeped hot tea from a selection of international varieties runs $4 per person.

The next level of service is a Cream Tea, at $8 per person, which includes a pot of tea and homemade scones. 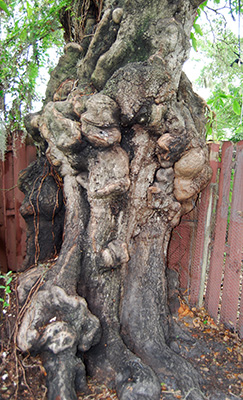 Judy and Mike Smith, owners of Charms of Leffingwell, 905 Leffingwell Ave., Ellenton, plan on putting a Fairy Garden in the old, gnarly oak tree in the yard.

A Sweet Tea, for $12 per person, includes the pot of tea and scones and homemade savory tea sandwiches or sweet pastries.

And the Charmed Tea, at $18 per person, most like the renowned English High Tea, includes a pot of tea, scones, tea sandwiches and pastries.

The savories, or tea sandwiches, vary according to what Judy, who works the kitchen, makes for the day. They can range from turkey to salmon spread to egg salad to anything else that she decides to whip up.

“And I always have cucumber sandwiches on the menu,” she said. “It’s expected.”

The breads are all top quality, and served without crusts and cut into different shapes or pinwheels.

The sweets also can vary. Sometimes they are pastries, chocolate-chip muffin bread, a chocolate-strawberry Neapolitan, or other types of confections.

“I use quality ingredients, and I’m always trying to come up with new menu items,” Judy said. “Recently I made red-pepper hummus sandwiches.”

They serve coffee and caffeine-free tea, as well as an assortment of iced, brewed, fruit-blend drinks for customers who do not want hot tea.

“We want to accommodate the wishes of our customers,” she said. “If they need gluten-free we’ll have it. They only need to let us know.”

Around 20 customers can sit at tables in the house’s former dining and sitting rooms surrounded by shelves and cabinets filled with antiques and collectibles.

“We didn’t want lacy and frilly,” Judy said. “We wanted a comfortable atmosphere.

“One woman came in one day and said it made her feel like she was in her own home.”

The rooms on the second floor contain the rest of the antiques, collectibles and gifts for sale at Charms of Leffingwell.

The large Victorian house with a wraparound porch was built in 1905 for Brilla and Arthur Mathews.

The Mathews were gentleman farmers and raised three daughters and one son in the house, according to the business website.

Family members lived in the home until 1970.

In the future, the Smiths plan to expand their business with classes, tastings and garden weddings.

They have started extensive landscaping of the grounds and upgraded a koi pond.

“We’re going to call it the Sereni-tea Garden,” Judy said. “And there’s going to be a Fairy Garden in the old gnarly oak tree in the corner.”

For more information call 941-417-2150 or e-mail the Smiths at charms@charmsofleffingwell.com.